In case you missed it, we got a brand-new global climate deal straight out of COP21 in Paris last weekend. It comes to us after decades of failed and semi-failed treaties, many months of negotiation, and a couple of weeks of brie and baguettes for thousands of international diplomats. Is the deal promising? Yes. Is it perfect? No. Is it really, really complicated? Of course it is! Allow us to break it down for you — using everyday household objects.

Where would you be without your vacuum? Living in a dusty hellhole, that’s where. And that’s where we’ll all be soon enough if we don’t address climate change. So the fact that the world reached an agreement in Paris is amazing, and it’s a milestone that should be celebrated — but like a Hoover owner dreaming of upgrading to a Dyson, there’s room for improvement. Significant details that didn’t make the cut, for instance, include indigenous rights, compensation for loss and damages, and a call for restraining fossil-fuel development.

Made in China? You betcha. And France, and the Philippines, and Nigeria, and Australia. The idea of fighting climate change has been, at long last, officially agreed to by 196 countries — and each one has identified actions it will take. These pledges will be reviewed every five years.

OK, it’s not actually going to cut that well — not enough to keep global temps to 2 degrees Celsius above pre-industrial levels, never mind the 1.5 degrees that is the agreement’s ‘reach goal’ — but it’ll cut some: The current set of pledges will limit warming to roughly 2.7-3.7 degrees Celsius, experts estimate. So maybe it’s more like those old, dull scissors that have been in the back of the junk drawer for longer than you can remember. Or the safety scissors you used in first grade. Remember those? 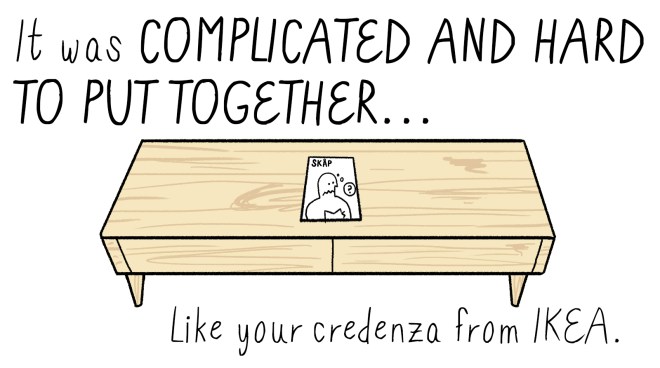 We know how much you swear when you read those furniture manuals. (Yeah, your neighbors told us.) So imagine how much swearing and name-calling went on during the more than 20 years it took to get to this point. After all that, this thing better work. At least now we know how to say “I said 1.5 degrees, pigeonhead” in Uzbek.

You have a ratchet, right? It’s probably right over there by the thingamabob. Anyhow, the world has a “ratchet mechanism” now — a hotly contested part of the agreement that ensures that each nation’s pledges will be revisited, and re-ambitionized as necessary, in 2020. This clever clause, which almost didn’t make the cut, will help this whole carbon-cutting idea stay on track.

Nobody wants to walk around all day feeling the pinch of actually saving the planet. So the agreement’s creators left lots of wiggle room. This way, the participating countries can look dashing and feel comfortable — for a while, at least. But eternal thong season will be here before we know it, and that means we all have a lot of work to do. See you at the wax salon, pigeonhead.