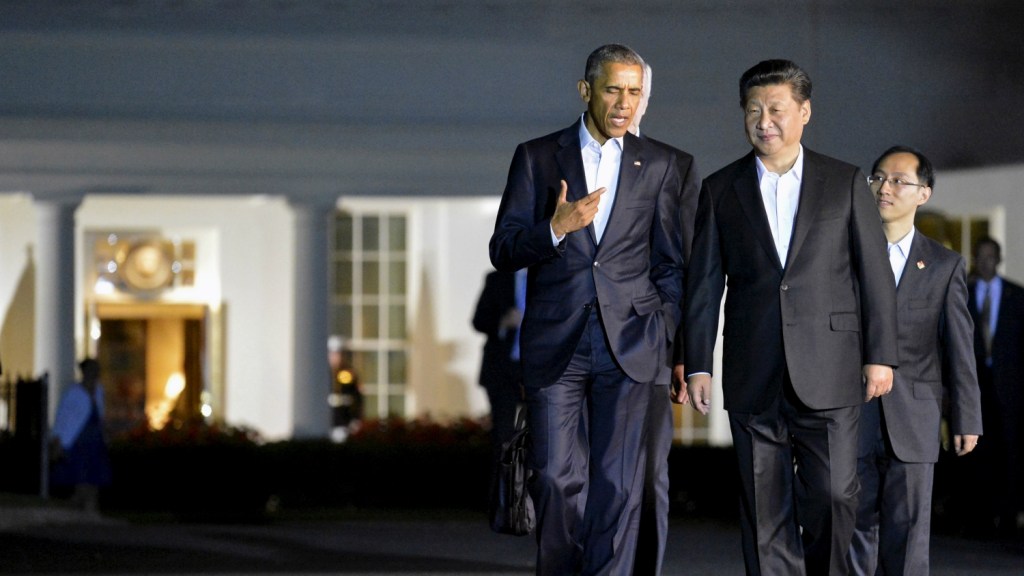 On Friday, Chinese President Xi Jinping will announce that China will start the world’s largest carbon-trading system by 2017, according to a statement released Thursday night by the White House.

The announcement allows China to implement something that evaded President Barack Obama during his first term in the White House: an economy-wide reform putting a price on carbon dioxide emissions and encouraging big polluters to develop alternative ways to generate energy. Ultimately, the program is intended to curb the planet-warming emissions that are generated by burning fossil fuels.

To those who have closely followed China’s extensive actions to reduce greenhouse gas emissions and air pollution, today’s announcement that the planet’s biggest emitter of CO2 will launch a nationwide cap-and-trade sysetm will not come as a surprise. The program—which builds upon seven regional carbon markets that are already active across the country—has been in the works for some time, and first appeared in the press last year.

But Friday’s high-profile announcement marks the first time that the Chinese president has committed to the cap-and-trade program—as well as the first time China has laid out a firm timetable—says Li Shuo, who tracks international climate negotiations for Greenpeace. “To date, there has been no official policy paper that confirms [the program],” he said in an email. “The fact this will be officially announced from the president’s level during the world’s most important bilateral meeting is significant. It also delivers the message: Now the Chinese will put a price tag on carbon nationwide—how about the U.S.?”

According to a source briefed by U.S. officials about Friday’s announcement, the new cap-and-trade program will cover “the lion’s share of China’s emissions.”

“It’s not just the power sector: It’s steel, it’s cement … it’s basically all heavy-emitting industries,” this source told me. A cap-and-trade system essentially puts a price on every ton of carbon emitted by polluters, and it allows those companies involved in the program to trade permits allowing them to pollute. In the pilot carbon markets already operating across China, prices per ton of carbon are roughly comparable to other international markets. China will now become the biggest and most important hub in a string of Asian countries that have adopted, or are in the process of building, carbon-trading programs.

And cap-and-trade will be just one part of a wide-ranging agreement announced between the two countries, building on a breakthrough deal forged by Obama and Xi last November in Beijing, in which China promised to finally start to taper its coal use. In that deal, the U.S. pledged to cut emissions by up to 28 percent by 2025, while China agreed that its emissions would peak around 2030 and promised to get one-fifth of its power from non-fossil-fuel energy sources by the same year.

While we must wait to see the final text of the new deal, the person briefed by officials told me the announcement will also include a new agreement on heavy-duty vehicle standards and building efficiency standards. China will also pledge “pretty major financing” to help developing countries reach their goals of slashing carbon emissions and adapting to climate change. (China plans to contribute to another fund, rather than the United Nations’ Green Climate Fund that other countries have agreed to back. The U.S. has pledged $3 billion to the Green Climate Fund.) Crucially, China and the U.S. will also agree to a common system of reporting and transparency for greenhouse gas emissions ahead of December’s high-stakes climate negotiations in Paris, and there will also be diplomatic language announced about the goals for a Paris accord.

The announcement by the White House ahead of Friday’s state dinner is also fascinating for what it says about the statecraft of Xi’s historic visit to the U.S. Climate action is vital to both Obama and Xi at this crucial juncture ahead of the Paris talks, and this public commitment counterbalances thornier issues such as the militarization of the South China Sea and cybersecurity, on which China and the U.S. share far less common ground. “They’ve been working on it pretty hard, and it’s part of the few bright spots in the overall China-U.S. relationship,” the person who was briefed by U.S. officials told me. “So this is an area they have been collaborating and found some common ground.”

“This seems like a pretty significant contribution and hopefully will build momentum towards Paris,” the source said. “This is not going to resolve everything, but it’s an important signal between the two biggest players.”