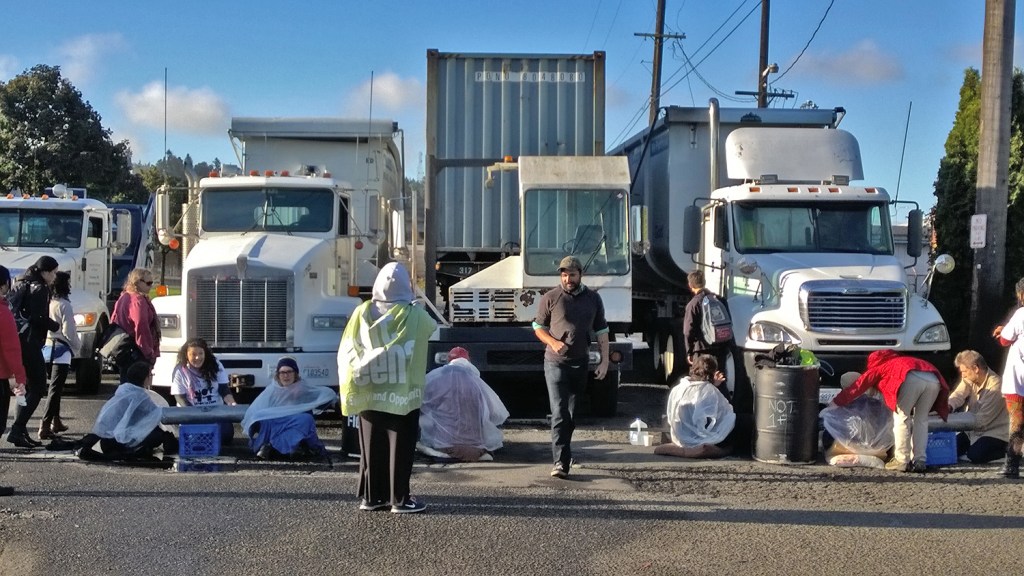 About a month ago, the Northwest Detention Center Resistance Coalition (NWDCR), a Seattle-based immigrant activist group, issued a call to action: It asked local groups to show solidarity with immigrant detainees inside the privately owned Northwest Detention Center in Tacoma. Specifically, the group called on supporters to block buses and vans that drive detainees to Sea-Tac Airport to be deported.

On Monday, that’s exactly what happened, as local climate activists and other allies formed a human chain (reinforced with lockbox devices made of PVC pipe and metal) and blocked three exits where buses usually take detainees out. The protest successfully prevented anyone from being deported from the Tacoma detention center — at least this week.

NWDCR, which is part of a national network called Not 1 More, formed about a year-and-a-half ago, when a group of detainees inside the facility began a hunger strike to protest the conditions there: maggots in the food, abuse from guards, and lack of access to medical treatment. The Northwest Detention Center, which is owned by the GEO Group, is also built adjacent to a Superfund site commonly referred to as the Tar Pits; detainees and visitors often describe the smell at the detention center as a mix of sulfur and rotting food. The site is vulnerable in the event of a tsunami — its more than 1,500 detainees could drown in just eight minutes.

After the 2014 hunger strike, which lasted 56 days and inspired similar protests in two Texas facilities, some detainee strikers were released, while others were deported. Those still inside, some of whom have been held for years, continue to agitate for release. According to Angelica Chazaro, who organizes with NWDCR and helped put together a similar but smaller blockade action last year, the 2014 victories inspired “a lot of groups who didn’t even know the detention center even existed” to show solidarity with hunger strikers. Still, she says she was pleasantly surprised at how many people, including greens who’ve not traditionally worked with immigrant rights groups in Seattle, showed up on Monday — locking arms in the 5:30 a.m. darkness.

And it wasn’t just climate activists who blocked the three exits to the detention center. Food, labor, and transgender activists also answered the call — as did the Raging Grannies, including one woman in a rocking chair. For the climate-movement participants, the detention facility’s conditions were one motivation, but so was making an overt connection between immigration and the environment.

Rising Tide Seattle volunteer Ahmed Gaya is participating in an affinity group of climate activists who have put immigration on their agenda and decided to help with Monday’s action. “On a broader scale, we think the struggles of migrant and climate justice are one and the same,” explains the 29-year-old. “Many people are migrating and are forced to leave their homes because of climate change.” Further changes in the climate will lead to increased migration — and countries like the United States, which have produced more pollution, have a responsibility for that human impact.

While many of the protesters had participated in other direct actions in the past, for some, including 59-year-old Matthew Horwitz, it was their first time. Horwitz, who works on developing affordable housing and is affiliated with 350 Seattle, had never physically locked himself down — but wanted to stop deportations on Monday. “We’re well aware that there will be, and are currently, people that are being dislocated and displaced because of climate change,” says Horwitz.

According to NWDCR’s Chazaro, deportation buses leave the Tacoma center once a week on Monday, and never later than 12 p.m.; it’s assumed that no other deportation buses will leave the facility this week, given the coordination it takes to actually deport someone. (Phone calls to Immigration and Customs Enforcement’s Seattle field office to confirm this were not returned.) And although police showed up to the action and several cars and trucks inched very close to the activists, no one was moved or arrested — including one climber who strung up a message of solidarity for the detainees inside. Shortly after noon, the direct activists unlocked their arms from devices and walked away: not one arrest, and not one deportation.

What happened in Tacoma Monday builds on what NWDCR has worked on for more than a year: figuring out ways to support detainees inside the center — preventing deportations and working on their release. It’s difficult to organize with detainees inside immigration facilities, who can be transferred anywhere within the U.S. at any time. And it isn’t always easy to connect with groups that haven’t traditionally advocated for immigrants.

“We’re looking forward to more conversations with the climate justice movement, who put themselves on the line,” says Chazaro, adding that NWDCR next wants to consider how her group can show up for the climate.