BERKELEY, Calif. — Willis Linn Jepson encountered a squat shrub while he was collecting botanical specimens on California’s Mount Tamalpais in the fall of 1936. He trimmed off a few branches and jotted down the location along the ridge trail where the manzanita grew, 2,255 feet above sea level.

The desiccated specimen is now part of an herbarium here that’s named for the famed botanist. It was among hundreds of thousands of specimens of thousands of different species that were used recently to track the movement of plant species up the state’s many hills.

The results of the analysis warn that native plants are struggling to keep up with changes around them as pollution from fuel burning and deforestation continues to warm the planet. Earlier research into the movement of Californian animals shows they’re shifting more quickly than the native plants. 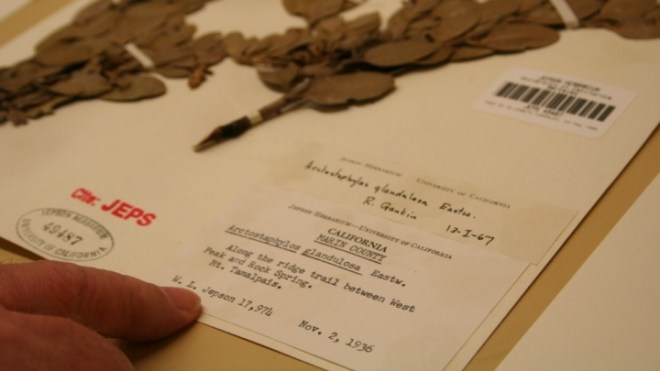 “The big takeaway is that species are on the move, and they’re moving at different rates,” said Jon Christensen, a scientist and historian at the University of California, Los Angeles. “Which raises the concern that the ecosystems of California could be unraveling.”

Christensen and four other scientists analyzed a database of 2 million specimens from a network of 35 Californian herbariums. Herbariums are like little-known natural history museums that store vast collections of ferns, mosses, algae and other plants. They found 681,609 specimen records to include in their analysis.

They discovered that the range of the Eastwood’s manzanita, which was the type of plant Jepson trimmed on the mountain trail in 1936, hasn’t budged — even as temperatures have risen around it.

Temperatures have been rising around the world because of the heat-trapping effects of carbon dioxide, methane, and other types of atmospheric pollution. The combined effects of global warming and phases in ocean cycles contributed to record-breaking warmth globally in 2015.

More warming is anticipated in the years and decades ahead, yet ecologists remain unsure how wildlife will be affected. The discovery that the Eastwood’s manzanita range has been locked in its original range “raises questions” about whether it will be able to adapt as the climate changes around it, Christensen said.

Overall, just one in eight native Californian species shifted their ranges significantly upward during more than a century of specimen collecting in California, during which time temperatures rose by about 1 degree C (nearly 2 degrees F), the researchers concluded in a paper published in Global Ecology and Biogeography.

“Plants and animals aren’t moving together in sync,” University of Connecticut ornithologist Morgan Tingley, who has studied the shifting ranges of native birds in parts of California, said after reading the new paper.

“This leads us to suspect that ecological communities are breaking down and disassembling,” Tingley said. “It’s a worrying possibility, and one that we don’t yet know the consequences of.”

The native plants were also found to be moving more slowly into higher altitudes than their invasive counterparts, one in four of which were found to be spreading uphill.

As the planet warms, ideal climatic conditions for different species of wildlife tend to shift to higher latitudes and greater altitudes. Not all species are expected to be able to keep pace with the changes underway. Of those that do, some will encounter mountaintops, shorelines, and freeways that prevent them from going any farther.

“If the climate changes too quickly, and species can’t keep up with it, they might be left behind in a climate that’s completely unsuitable for them,” said Nate Stephenson, a federal forest ecologist who researches climate change. “Then their population numbers may go down. In extreme cases, they might even blink out.”

While animals can fly or clamber to new grounds, most plants expand their ranges only when they cast their seeds.

“There’s a legitimate concern that many plant species are simply not evolved to be able to shift their population distributions as fast as the current climate-change event will require,” said Park Williams, a bioclimatologist at the Lamont-Doherty Earth Observatory.

Williams described the new paper, with which he was not involved, as the “culmination of an incredible amount of work.” He said its conclusions are also “broadly relevant” outside California.

“California is a great place to study species’ range responses to climate,” Williams said. “They have a great dataset, and also a lot of diversity in terms of elevation and climate type.”

The new study relied on the results of the ongoing digitization of the specimens at the Californian herbariums. Digitization involves shooting digital photographs of samples and noting the coordinates and other details of the sites where they were collected.

About a quarter of more than 2 million specimens stored in manilla folders in long rows of tall cabinets in a large herbarium at the University of California, Berkeley have been digitized so far. “Big data is a big thing on our campus,” said Brent Mishler, a biology professor who oversees the collection. 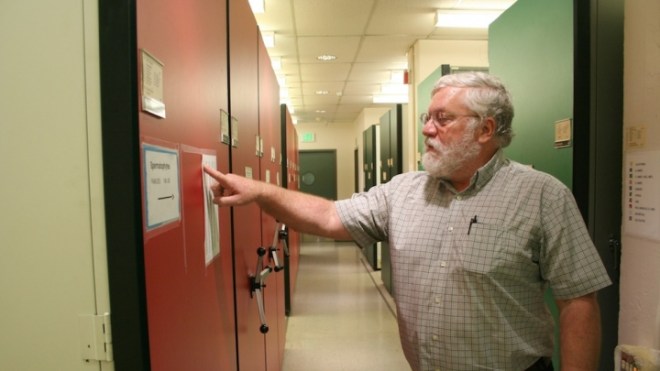 Brent Mishler, director of the University and Jepson Herbaria at the University of California, Berkeley, in a row of cabinets filled with botanical specimens.John Upton/Climate Central

The potential power of each piece of data is limited by the amount of information recorded when the specimen was collected.

“The older ones — they may not have as much data,” Mishler said. “But it still tells you where it was collected and when.”

The analysis of the big herbarium data showed small-seeded native plant species, such as grasses, are moving more quickly and more often up California’s hills than those with larger seeds — such as manzanita. Small seeds travel farther than large ones, making it easier for those types of plants to spread.

Invasive species were more likely to be stretching their ranges upward than native species, and the ranges are moving or expanding more quickly.

Unwanted weeds aren’t necessarily growing their Californian footprints because of climate change, although it may be helping some of them. Many would still be conquering new territory as they continued to invade after finding footholds in the state in decades past, regardless of climatic changes.

The expanding ranges of unwanted weeds is putting extra pressures on native plants, which are already struggling to withstand the effects of climate change.