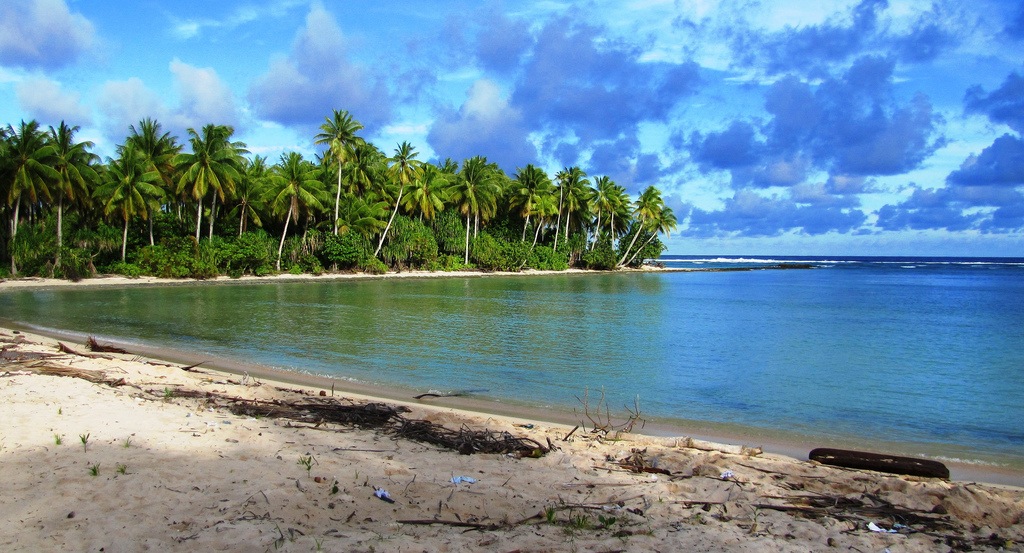 How should governments treat people who are forced to migrate due to climate change? That question is on the working agenda for the upcoming Paris climate talks, at least sort of — and that’s a good thing. As it stands, there’s no clear definition of what, exactly, a forced climate migrant is; nor is there an international legal framework to deal with the mass movement of people (and, sooner than you might think, entire nations) displaced because of global warming. Paris could go a long way toward further recognizing the phenomenon, as well as helping to shape how to deal with it. If it doesn’t, some of the world’s most vulnerable people will remain in a bizarre legal and political limbo.

The United Nations’ 1951 Refugee Convention governs who is deemed a refugee, and what rights they’re afforded as a result. It explicitly protects people who have a “wellfounded fear of being persecuted for reasons of race, religion, nationality, membership of a particular social group or political opinion,” and who have traveled outside of their country of origin. That means that the people we sometimes call “climate refugees,” who flee their country because of sudden environmental disasters, aren’t covered. Sixty-four years after the treaty was signed, it has proven inadequate to handle the devastating ramifications of global warming — which makes sense, since it wasn’t designed to address them. Its authors couldn’t foresee that the global community might someday need to figure out how to protect people whose small island states are disappearing because of rising sea levels — people like Angua Erika and Ioane Teitiota.

Erika and Teitiota, both originally from Kiribati, decided to leave their climate-threatened South Pacific home because the sand they were trying to live on was sometimes inundated by the ocean. They got New Zealand work visas in 2007 and made a new life for themselves there. The couple soon found work and birthed three children in their new home. In 2011, Teitiota was pulled over for a broken tail light — and that’s when authorities realized that he was in the country on an expired visa. As a result, the family, including the three New Zealand-born children, was threatened with deportation.

Fearful of returning to a nation that is disappearing underwater, Teitiota claimed he was a climate refugee. His case, the first of its kind, went all the way to New Zealand’s Supreme Court, which dismissed it in July. Because Teitiota didn’t qualify as a refugee under the United Nations’ 1951 Refugee Convention, and because New Zealand doesn’t extend birthright citizenship to children born of non-citizens, the whole family was deported to Kiribati in September.

The same decision that secured the family’s deportation also noted that it “did not mean that environmental degradation resulting from climate change or other natural disasters could never create a pathway into the Refugee Convention or protected person jurisdiction.” That nod didn’t mean much for the case in question, but it nevertheless leaves open the possibility for forced climate migrants to obtain recognized refugee status in New Zealand or elsewhere in the future. How that would actually be accomplished, however, remains a bit of a mystery.

While island nations like Kiribati face total inundation, other regions less existentially threatened still face an increase in weather-related disasters like droughts and hurricanes — and people who flee such disasters aren’t covered under the refugee convention, either.

Lewis Marshall, founding president of the American Academy of Disaster Medicine, says it would make sense to extend refugee protections to people ravaged by environmental disasters. “There is terminology in the [1951 convention] that entitles refuges to protections during public disruptions, so we should be able to apply the charter to environmental refugees,” he says.

The advantages refugee status confer are not to be underestimated: Not only are refugees immune from deportation, but they enjoy other entitlements, too — typically, all the benefits of citizenship of the country that has granted the refugee status.

“It would be difficult, if not impossible, to frame and implement such international protection legislation to address the issue [under the refugee convention],” explains the U.N. Refugee Agency’s Andreas Needham. But the agency is working on a Protection Agenda that relies on existing national mechanisms to deal with people displaced by climate change. This month, 110 nations adopted the measure. Yet even under the Protection Agenda, it’s not exactly clear who is covered, or how.

And therein lies part of the problem: We’re using loose terms to talk about two unique categories of people who are moving due to global warming. One group (the small-island peoples) needs entirely new land for their states; the other group (people who flee disasters) simply needs to deal with the displacement of a given number of people, whether internally or across borders.

Although an agreed legal term as well as an international legal framework may help address the threats faced by small-island peoples, the solutions may need to be more political in nature. “It will have to be dealt with separately, in the sense of finding land to relocate them might lead to more bilateral or regional agreements being signed,” says Atapattu. She adds that recognizing the problem within an international legal framework would still be helpful.

The same is true for people moving across borders due to the weather-related consequences of climate change. The United States, for example, might sign on to an international legal framework that recognizes that forced climate migration exists. But when a massive hurricane in Mexico causes massive migration to the north, the question quickly becomes a sticky political issue and not solely a legal one.

And what about hurricanes that, like Patricia last week, may or may not be caused by climate change? That’s why experts are careful not to link any one storm to climate change, and talk instead about the increased overall likelihood of extreme weather events. But we’re not even that far along toward establishing a definition of how global warming affects migration to debate those details.

One thing we know is that, time and time again, the people who are least responsible for creating global warming are the ones most often forced to find new places to live because of it. Developed countries, which have emitted more carbon in the process of their economic development, have seen far less devastation — and when they do, they’re also more like to be better equipped to deal with the consequences because of the wealth they’ve amassed.

Atapattu, the U.N.’s Needham, and disaster doctor Marshall are all optimistic that an international framework will be fully adopted, and soon — though not necessarily soon enough. As it stands, one person is displaced each and every single second because of a natural disaster. That’s more than 25 million displaced people every year since 2008 — millions of whom can blame climate change for their plight.

“I’m hopeful that the Paris conference will at least include them,” says Atapattu.

But if the mere recognition of forced climate refugees is cause for celebration, we’ve got a long way to go — and fast — for the displaced multitudes. They’re escaping conditions they’ve had little to no hand in creating, while those who are responsible for global warming are just now considering what to call them, how to classify them, and how to protect them.