Your sleepless nights of anticipation are about to end: The U.N. just released its report on the projected aggregate effects of countries’ intended nationally determined contributions (INDCs).

In the event you haven’t been biting your nails to the extreme cuticular degree that we have over at Grist HQ, here’s the scoop. Since the end of February, countries around the globe have been submitting emissions reduction pledges — INDCs — to the U.N. in the run-up to the year end’s Paris climate negotiations. But countries’ INDCs are a bit of mixed bag. Everyone tends to use drastically different metrics for reporting their targets, which makes calculating the collective impact on global greenhouse gas emissions trickier than it should be.

Luckily, the U.N. is up to the task. On Friday, the multilateral body released its synthesis report on the projected impact of INDCs submitted thus far. The verdict? If all 147 countries that submitted an INDC by Oct. 1 followed through on their pledges, the U.N. predicts we’ll be able to cut the world’s average per capita emissions by up to 9 percent by 2030, compared with 1990 levels. In a statement, U.N. climate head Christiana Figueres noted that existing temperature projections consistent with emissions projections in the report could limit global warming “to around 2.7 degrees Celsius by 2100.” It’s no 2C (or 1.5C!), but it’s better than the 4.5C we’re projected to experience without the pledges. The main results are summarized in the lovely chart below: 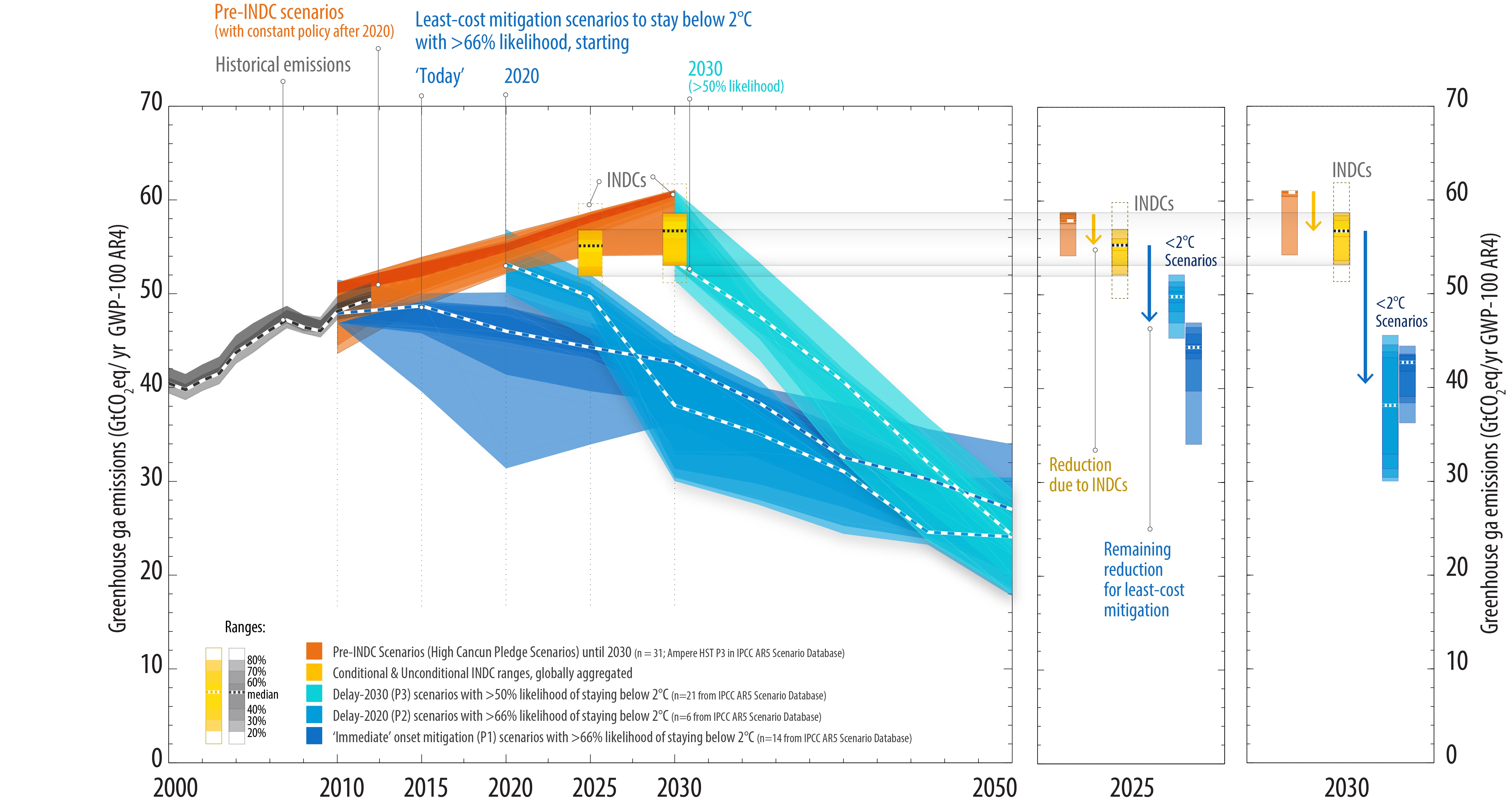 Note, of course, that the yellow INDC bars aren’t exactly getting us to the 2C targets in blue. (The multiple shades of blue indicate various levels of confidence in emissions levels actually corresponding to 2C.)

The U.N.’s projections and Figueres’ statement appear to line up with temperature predictions found in a similar report released by Climate Action Tracker (CAT) earlier this month, as CAT also predicted a 2.7C increase given existing pledges. The U.N.’s methodology — or at least Figueres’ optimism — is perhaps slightly more conservative than CAT’s, though, given that the earlier report included the pledges of only 135 countries.

Figueres said that the INDCs “represent a clear and determined down-payment on a new era of climate ambition” and that they provide “a foundation upon which ever higher ambition can be built.” Manufacturing this ambition will be crucial if global leaders decide they’re serious about ratcheting below 2C.

In addition to aggregating climate change mitigation targets, the U.N. report also attempted to summarize countries’ adaptation plans. Adaptation, however, lends itself even less to neat aggregation, and only about two-thirds of countries that submitted pledges included an adaptation component. What we do know is that adaptation will embody a hefty cost of its own, with “individual needs ranging from USD 100 million to over 200 billion for the whole INDC period to around USD 10 million to 3 billion per year,” wrote the report authors.

All told, the report is cause for some degree of optimism, but it’s the same kind of “least-worst candidate” optimism you feel around election time. Sure, 9 percent emissions cuts and 2.7C are better than nothing, but “better than nothing” isn’t going to save the world.