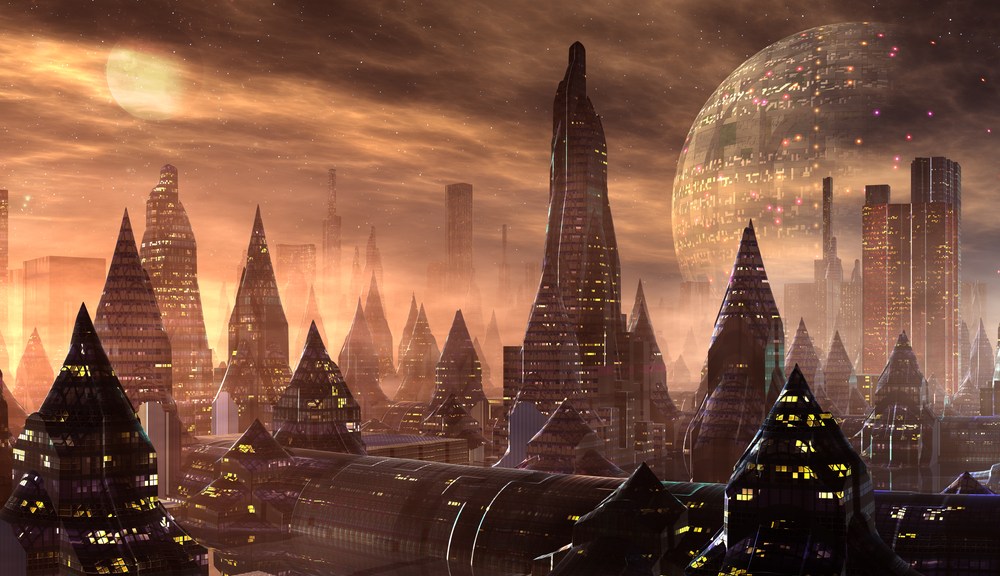 The world as we knew it is gone.

Even if nobody is talking explicitly about it, it’s clear that something terrible has happened and in its wake, humanity must once again reset its priorities. Can we, in this resource-scarce new world, fashion some kind of idyllic agrarian commune with shared goods, serene faces, and hemp robes? Or are we doomed to be selfish hoarders, creating even greater scarcity which we can then leverage for our own benefit? Also, is that … is that some kind of genetically modified man-wolfephant?

Post-apocalyptic science fiction isn’t new. But you may have noticed an uptick in books set in the wake of some kind of major climate disaster. Some call it “cli-fi” — sci-fi infused with the increasingly frightening impacts of climate change. The trope has deep roots, says science fiction scholar Istvan Csicery-Ronay, and plenty of room to grow.

In fact, of late, cli-fi has been creeping out of the fantasy and science fiction sections of bookstores and libraries and into the mainstream. Margaret Atwood’s Maddaddam trilogy, for example, is everywhere. Its simple, cartoon-like, GMO-gone-wrong future isn’t hard to imagine. Once you get past the brand names and animal mashup portmanteaus (pigoons, rakunks, wolvogs), you realize you’re just looking at a version of us, not all that far in the future. It’s relatable, in a woozy way.

Cli-fi is “getting some interest from folks who are not necessarily interested in science fiction,” says Csicery-Ronay, an English professor at DePauw University in Indiana and co-editor of the journal, Science Fiction Studies. For some people, it may be even be a sort of gateway into science fiction, which has a long and proud history of tearing civilization down and making characters build it back, or deal with the consequences of living in someone else’s rebuilt world.

The Russians, according to Csicsery-Ronay, were pioneers of the genre. “They had a category, late 19th century, early 20th century, called the ‘If-This-Goes-On Fiction,’ kind of a warning,” he says, “a particular kind of dystopian fiction, that if a certain trend goes on, and we don’t stop, then this is what’s going to happen.”

“This is sort of my fetish,” Bacigalupi says. “Bad decisions made badly by bad people. What happens next?”

His latest inspiration? Erstwhile Republican presidential candidate Rick Perry. “I was down in Texas when their drought was getting going,” Bacigalupi says. “It was sort of biblical, apocalyptic heat. The cows were being put down because the land can’t support them. All this great systemic collapse stuff percolating around, and at the same time, Rick Perry … is organizing a prayer circle and praying for rain.

“That was the moment,” Bacigalupi says.

The result is The Water Knife, a novel set in a near-future, drought-stricken southwestern United States — similar to the one he created in his short story “The Tamarisk Hunter” — and featuring a water war between Phoenix and Las Vegas. The two cities have arrived at this point in the future with different approaches. Good old, cynical Las Vegas recognizes it’s going to have trouble as water becomes more scarce and prepares for battles to come, legal and otherwise. Phoenix takes more of a Rick Perry approach.

The book, and others like it, could provide a model for scientists and environmentalists who are clamoring for some kind of approachable yet still awesome — in both senses of the word — way of communicating a very real if-this-goes-on message. As in, if this goes on, inland real estate is where it’s at, presuming we don’t revert to a system of bartering or pillaging or maybe just asphyxiating.

And this is why there may be more at stake with cli-fi than most fiction. For Annalee Newitz, editor-in-chief of science fiction site io9.com, there’s real value in getting climate change right. In a post on that site, she hails Tobias Buckell’s Arctic Rising for the way it “explores how the loss of ice in the Arctic Ocean will change international relations and reverse some countries’ economic fortunes,” and Kim Stanley Robinson’s epic 2312, in which humans have colonized much of the solar system, with a great, moving city that stays on Mercury, but never on the side the sun hits; moving colonies inside asteroids; and, of course, a city of canals in what we know now as New York City. His approach to technology is held in science fiction circles to be both plausible and cynical — cli-fi characteristics, to be sure.

Others in the science fiction realm with climate themes you might consider, according to Csicsery-Ronay: Robinson’s Forty Signs of Rain trilogy, the aforementioned Atwood Maddaddam trilogy, Ian McDonald’s River of Gods and The Sea and the Summer, also published as The Drowning Towers, by George Turner.

And there’s more coming soon. After making a deal for Bacigalupi’s Water Knife, due out in spring of next year, an editor at Knopf told the New York Times that he thinks it’ll “attract a crossover audience beyond Mr. Bacigalupi’s core readers.”

It’s about time for that crossover, too. Climate fiction suggests a few things: First, humans are humans, and we’ll have the same stupid fights on any backdrop spacetime throws at us. Second, that today’s hero, be it a captain of industry, a liberation fighter, or a seemingly clever technology, could well be tomorrow’s villain — a lesson we in the real world tend to learn 30 years too late. And third, that climate change might be awfully scary, especially for those of us who’ve grown accustomed to building sprawling, air-conditioned cities, on inhospitable terrain, with apparent impunity.