A few years ago, Jack Fleck was reading Tropic of Chaos, an investigation into how climate change fuels political discord and violence, when he began to feel discordant.

“It talked about the impunity of oil companies, that they can do anything and there are no consequences for them,” says Fleck, a 67-year-old retired transportation engineer in Oakland.

So Fleck devised a clever way to strike back at Big Oil: little labels on gas-station pumps, telling motorists their purchases are harming a feverish planet. After all, a typical car coughs out about 4.7 metric tons of CO2 a year. Why shouldn’t drivers be reminded of that?

“I think of it as an idea whose time has come,” says Fleck, phoning from inside his Chevy Volt. “The only thing I can’t understand is why we haven’t done this all along. How are we selling a product threatening the future of civilization and not telling people there’s a problem?”

Fleck’s plan pinged the media radar and attracted attention, not all of it positive. A Fox Business interviewer last year called him “disingenuous,” saying: “If something happened to you today … I’m sure you would hope that the nearest ambulance was filled up with that fossil fuel to get you to a hospital.” 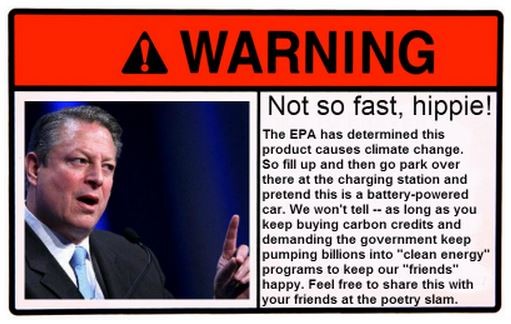 But Fleck might get the last guffaw. After years of playing PR chess and speaking at public meetings with the environmental group 350 Bay Area, he’s smelling possible victory. Both Berkeley and San Francisco are working in tandem to introduce label laws. City attorneys are reviewing the ordinances, and Berkeley’s city council could vote on theirs as early as summer.

“I don’t think anybody thinks this will take care of 50 or even 10 percent of the problem,” he says. “It’s one small step in a whole broad range of things we’re trying to do. We’re expediting solar permits for public and private properties, increasing funding for public transit, and making pedestrian and bicycle enhancements to incentivize more people to bike and walk.”

But Worthington adds it could be a good way to have consumers consider their own responsibility in the climate problem. “The most fundamental thing about [a label] is it’s at a direct point-of-sale, right when somebody is doing something that’s going to cause greenhouse gas emissions,” he says. 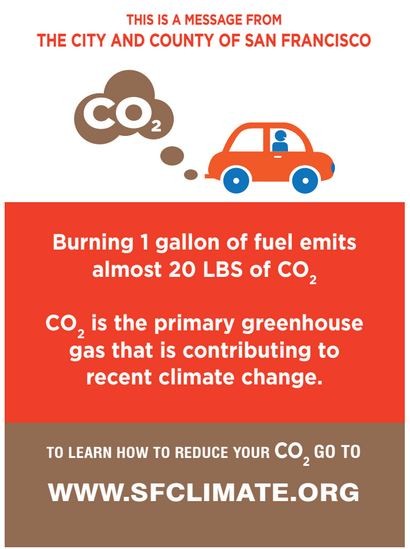 The Bay Area’s pioneering interest in climate branding is reflected in a January recommendation from Berkeley’s Energy Commission, saying it has the “potential for long-term behavior change” and is in line with the city’s long-term goal of reducing emissions 80 percent by 2050. Wrote the commission:

Although the link between motorized vehicle use and GHG emissions is widely known, making this information available at the point of purchase of motor vehicle fuel is intended to contribute to behavioral changes to reduce motorized vehicle use, thus contributing helping to accomplish the Berkeley Climate Action Plan (CAP) goals and helping to mitigate impacts on climate. These labels are analogous to the health warnings placed on cigarettes.

The labels could measure roughly four-by-six inches with a font at least 16 points tall. They’d be required for gas and diesel pumps and also establishments selling biofuel blends, compressed natural gas, and EV-charging services, as these are all somewhat connected to fossil fuel-derived energy. (Pure biofuels get a pass.) The city would produce the labels for a yearly cost of less than $10,000, but it’d be up to business owners to install them — or else suffer an unspecified violation.

From warning labels to information labels

When this idea first surfaced, activists referred to the climate notices as “warning labels.” This early prototype, for example, suggests there’s something nearby requiring a hazmat suit: 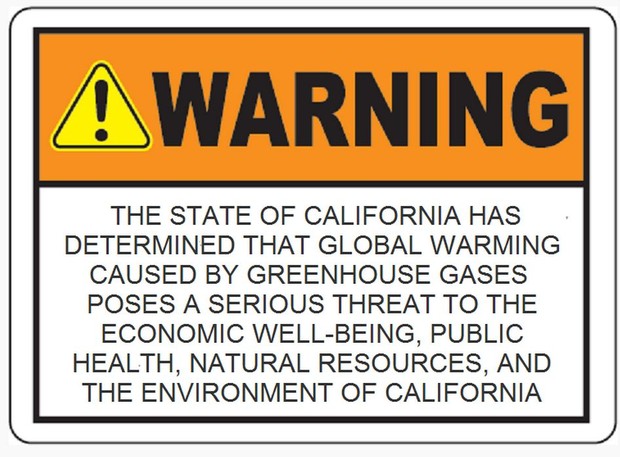 Now that lawyers are involved, the mock-ups are looking less alarming. The term “warning” is out and “information” is in. And the latest proposed text reads like lukewarm word oatmeal: “The U.S. Environmental Protection Agency (EPA) has determined that consumption of energy products derived from fossil fuels contributes to climate change.”

There’s good reason for the legal tip-toeing. The Berkeley energy commission has said it is “likely” the city would get hit by a suit from the Western States Petroleum Association or other industry group. Indeed, the WSPA has already spoken against the label idea, calling it “the type of forced speech that the United States Supreme Court has ruled is absolutely unconstitutional.”

WSPA believes consumers can and should educate themselves about the various political positions and science surrounding climate change. Fortunately, this information is widely available and may be read on demand through literally thousands of websites, blogs, newspapers, periodicals, books and other publicly accessible materials. … WSPA urges the City to consider further supporting and funding these avenues of promoting its viewpoints, rather than adopting unconstitutional mandatory labels forcing gasoline retailers to convey the State’s and the City’s views on climate change.

That raises the question: Is this constitutional?

Jamie Brooks, a 49-year-old retail-shoe salesman involved in the label push, says his personal research makes him believe the Bay Area can control the message. (Though he adds, “I’m not a lawyer and can’t speak with any authority on this.”)

“Under the auspices of climate-action plans — and there are hundreds in California — cities have the police power to safeguard people from greenhouse gases,” Brooks says. “And here we are burning [fossil fuels] like there’s no tomorrow. It’s such a cognitive dissonance.”

Worthington seems more cautious. “Morally, I’m sure” it’s acceptable, he says. “Legally, we’re researching that. … It does seem like some language is more legally defensible than other language.”

The Berkeley of the North — aka Canada — is also facing the unknown. Earlier this year, and completely independent of what’s happening in the Bay, West Vancouver passed a resolution supporting similar labels. “West Vancouver is always at the leading edge of things like this,” Mayor Michael Smith told the media.

But the labels have yet to be implemented, as local politicians are waiting for broader national support. Still, they look impressive: The designs include photos that claw at the heartstrings, like a child’s morose face, a wasteland of bleached coral, and some kind of animal corpse in a desert landscape

“Research from the tobacco realm shows that labels with images have more of an impact than text-only labels,” says Robert Shirkey, whose group Our Horizon helped advance the resolution. 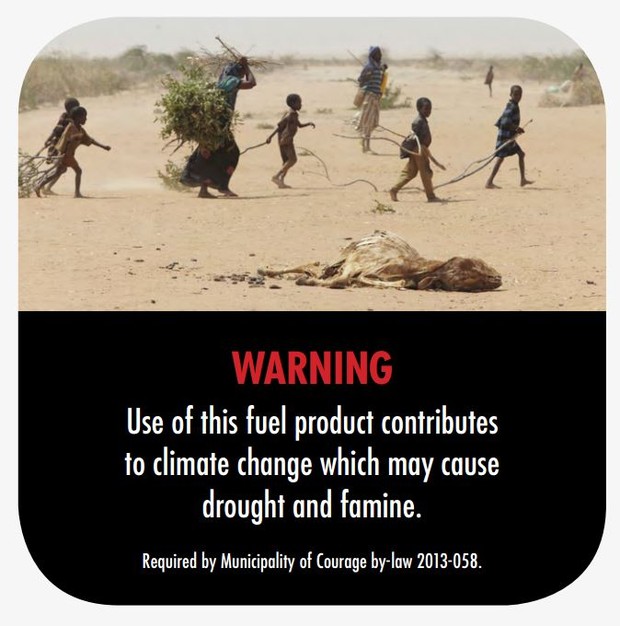 “The priming aspect is also useful in that it can help to shape how the product is perceived after the labels are implemented,” he says. “If fossil fuels are thought of in similar ways as we think of cigarettes, you’re creating a social environment that gives government much more space to address the issue.”

Slapping a dead polar bear’s likeness on a pump would likely sink Bay Area cities in a mire of legal hurt. The U.S. court system, for instance, has ruled that requiring graphic images on cigarette packs is a violation of free speech. But even with a less-in-your-face design, can the labels escape a potentially crater-making lawsuit?

If the cities get sued and lose, they could be on the hook for punishing attorney fees. However, the public spectacle of a trial might make it almost worth it for taxpayers.

“If oil companies take us to court and try to argue climate change isn’t happening, it’ll be like the Scopes Monkey Trial. They’d just get slaughtered,” predicts Fleck. “I’d love to have their paid stooges up there, and we put up IPCC experts.”

But if the label law does squeeze, it’d be one more notch in Berkeley’s title belt for Most Granola City Ever — first to approve a soda tax, first to celebrate a Bisexuality Pride day, and now first to attack global warming at the pump.

Fleck sounds fairly confident it’ll happen. “I’m from Peoria, Ill. I know if I took up climate change in Peoria, Ill., I’m not going to get anywhere,” he says. “But I also know in the Bay Area, we can do lots of things we can’t do in Peoria.”​