Cool roofs offer a salve for hot cities -- and the climate, too 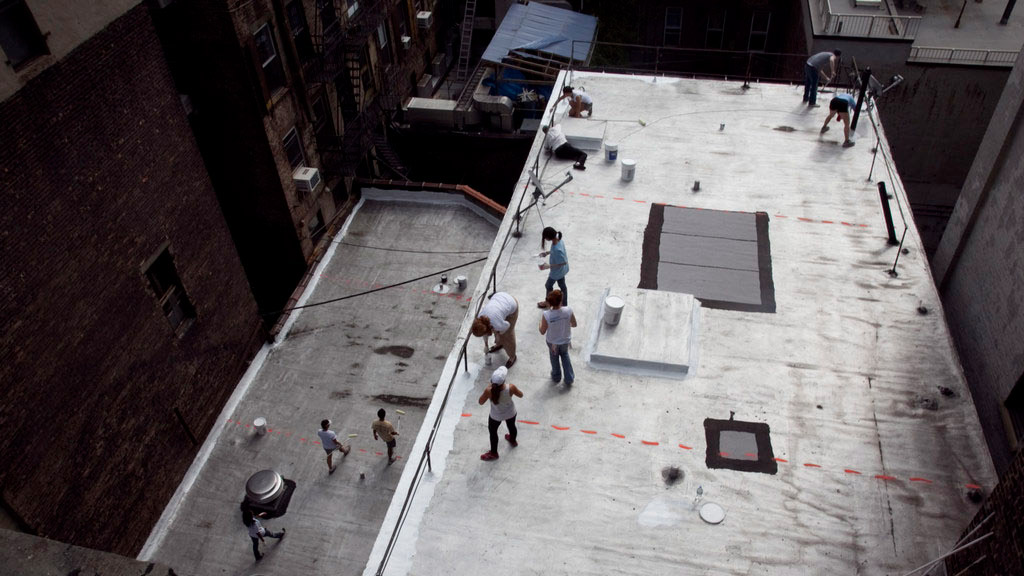 Cool roofs offer a salve for hot cities — and the climate, too

From his office in the Berkeley hills, Art Rosenfeld looks out on the heart of California’s Bay Area. The 87-year-old scientist keeps a pencil and a small notebook in his breast pocket, ready to jot down a quick note or make a calculation. With these simple tools he has been able to influence state and national energy policy over the years. But for now they stay tucked away as he enjoys the scenery. “I get a pretty good view of San Francisco,” Rosenfeld says.

While his vantage point has remained unchanged since beginning his career at Lawrence Berkeley National Laboratory in 1955, the view outside his window has changed considerably. The buildings are taller and more densely packed in on all sides of the bay. And from Rosenfeld’s bird’s-eye view, he sees that many of these buildings now boast noticeably brighter rooftops than they did even a few years ago.

This brightening is a direct result of Rosenfeld’s vision. For decades he has promoted “cool” roofs, which are lighter in color than traditional black slabs and therefore reflect more of the sun’s heat. Cool roofs save money by keeping indoor temperatures more comfortable in warm weather and reducing the need for air conditioning. And since smog forms more rapidly at higher temperatures, reducing excess urban heat can also make city air safer to breathe. To top it off, cooler temperatures can make heat waves less hazardous to city-dwellers.

On a larger scale, the impact can be even greater. A global campaign to brighten cities could cancel out some of the warming caused by greenhouse gases. This is because reducing energy absorption at Earth’s surface decreases the amount of heat these gases can trap in the atmosphere. Of this planetary conversion, Rosenfeld says “it’s like taking half of the world’s cars off the road for 20 years.”

With the United States leading the charge, that reality may not be far away. Cities from San Francisco to New York are combating rising temperatures and improving air quality – dampening the effects of climate change in the process – by brightening their roofs. In a way, it’s as though Rosenfeld has taken his pencil to city skylines; instead of shading in the changes he has influenced, though, he uses the other end to erase black roofs.

Art Rosenfeld got his Ph.D. in 1955 at the University of Chicago, where he was one of the final disciples of legendary physicist Enrico Fermi. From there, he built a career in nuclear particle physics at Lawrence Berkeley National Laboratory, one in a network of Department of Energy research institutions. Then the oil embargo of 1973 sent him down a new path. “Americans knew so little about how their automobiles worked that there were long lines of cars waiting to drive into gas stations with their engines idling, running out of gasoline as they sat there,” he says.

One Friday evening that fall, with the embargo in full effect, Rosenfeld noticed that across the bay in San Francisco, office buildings were “ablaze with lights.” All those lights would burn until Monday morning, while the workers who used them were away for the weekend. Using his trusty pencil and notepad, he calculated that shutting off the lights in one office floor over the weekend would save about as much energy as a tank of gasoline produced.

Intrigued by the prospect of reducing energy waste, Rosenfeld began studying how buildings can use energy more efficiently. “My wife thought I was overqualified for the job of going into energy efficiency,” he says.

In the 40 years since then, his work has revolutionized the energy performance of refrigerators, light bulbs, windows, and other building components. He is even credited with keeping Californians’ per-capita electricity use steady since the early 1970s while it has climbed steadily elsewhere—a phenomenon familiarly called the “Rosenfeld effect.” Rosenfeld first pitched cool roofs more than 30 years ago as an unconventional solution to air quality issues, with energy savings as a bonus. In 1980, recognizing that smog had become a problem, Los Angeles officials convened a panel of experts – Rosenfeld included – to discuss potential fixes. Smog is a noxious gas that forms when certain emissions, such as car exhaust, mix with ultraviolet sunlight. Because high temperatures catalyze this reaction, Rosenfeld saw cool roofs as a way to limit the rate at which smog forms.

“We came up with a plan to use cool roofs and plant shade trees in order to reduce air conditioning needs considerably,” Rosenfeld says. “We figured this could knock 4 degrees [Fahrenheit] off the temperature on a hot afternoon, which would reduce smog by 5 or 7 percent.”

Rosenfeld calculated that installing white roofs throughout the Los Angeles basin would save Angelenos $170 million each year in energy costs and health-related expenses. But air quality officials instead focused efforts on limiting the emissions that react to form smog (which has been fairly successful, but arguably leaves room for improvement).

Undeterred, Rosenfeld continued pushing his idea forward. After spending six years in Washington, D.C., as an energy policy adviser in the Clinton administration, Rosenfeld was appointed to the California Energy Commission in 2000. Five years later, he instituted the nation’s first cool roof mandate, which requires that all new and retrofit commercial flat roofs in the state be white. More recently, the directive has expanded to include residential homes in the very hottest parts of the state – but notably not Los Angeles. Federal agencies such as the Department of Energy are also transitioning to cool roofs on all their facilities, which account for roughly 3 percent of the nation’s buildings.

After he retired from the California Energy Commission in 2010, Rosenfeld returned to Berkeley Lab, where he continues to promote technologies that can create cooler cities. Meanwhile, his ideas continue to spread.

When Juan Carlos Piñeiro Escoriaza first heard Rosenfeld’s selling points for cool roofs several years back, he recalls wondering, “How did we ever decide to paint all of the roofs in our city black?”

So Piñeiro Escoriaza and a few friends began approaching nonprofits throughout the city, offering to coat their roofs white for free. News of their first project spread quickly through word-of-mouth, and when they showed up for the job, more than 100 other volunteers were there to help. That was when Piñeiro Escoriaza says they went from being “an intrepid group of activists to actually starting a movement.”

Not long after, Piñeiro Escoriaza formalized this movement as a nonprofit called the White Roof Project, which has brightened more than 100 buildings in New York.

In 2011, around the time the White Roof Project was getting off the ground, the Big Apple passed a roofing requirement similar to California’s. Chicago had already joined the cool roof club in 2008. And the Los Angeles city council recently approved the most stringent reforms yet, requiring cool roofs not just for commercial buildings, but for new homes and major home renovations as well. The rules were spurred by a study projecting that the region’s temperature would rise by up to 7 degrees by 2050, prompting concerns over air quality, energy use, power reliability, and public health. Homeowners can get a rebate of up to 30 cents per square foot when they purchase a cool roof product.

Rosenfeld believes that recent efforts aimed at cooling Los Angeles – including the new roofing regs – have righted its course. When he first started studying energy efficiency in the 1970s, the city’s average temperature had been going up about 1 degree every 12 years. He attributed this trend to its rapid urban expansion, which required the use of more and more dark surfaces. If that kept up, Rosenfeld predicted that “by about 2020, L.A. would be hotter than any city in the Western Hemisphere was at that time.” Now, he says, “That’s been stopped.”

Some remain leery of these reflectance requirements, particularly in northern cities, where roofs that absorb less sunlight in the winter can drive up heating bills. Chicago-based architect Tom Hutchinson notes that what is suitable in one place may be detrimental in another. “Roofing needs to be a decision based on a lot of things like location, sun, wind, rain, microclimates – there’s no one solution to fit all of those,” Hutchinson says. “Buildings are made up of systems, so you can’t prescribe just one component of the system like a white roof.”

Rosenfeld agrees that insulation can be a good way to make buildings more energy efficient, but he says that it has none of ancillary benefits of reflective roofs. “It’s surely a lot cheaper to make a city’s roofs white when they need to be replaced anyway than to bring all their insulation up to code,” Rosenfeld says. Besides, as he points out, “Insulation can’t make the air cooler during a heat wave.”

Rosenfeld also believes in the global benefits of brighter cities, which can make up for a portion of the brightness that is being lost as glaciers and sea ice melt. The ice that has traditionally occupied the poles is bright white, which allows it to regulate the planet’s temperature by reflecting sunlight. As global temperatures rise and this ice melts, it gives way to dark water that absorbs sunlight. While making cities brighter won’t stem sea-level rise, it might slow rising temperatures.

And the movement toward cool roofs is picking up steam around the world. Brazil, China, India, Japan, Mexico, and South Africa have all made commitments to prioritize reflective roofing.

Even where cool roofs have caught on, however, it could take 20 or more years for all structures to transition. Only then will the large-scale climate impacts be known, and it is likely that they are only a small part of the solution to climate change.

But Rosenfeld doesn’t let this slow him down. As long as there are still black roofs and hot cities, his eraser has more work to do. And as the movement he has inspired pushes forward, his handiwork will be ever more visible in the brighter, cooler metropolises of the future.