One of the perennial discussions in climate circles is about which impacts will break through the noise and apathy to finally galvanize people to do something about the problem. The usual suspects are droughts and food shortages, since they’re expected to bite first.

My own dark-horse candidate has been sea level rise. As I wrote last year, the carbon in the atmosphere today has already “locked in” enough sea level rise to swamp hundreds of coastal cities and towns around the world. Some 316 settlements in the lower 48 states, with a cumulative 3.6 million residents, are already doomed. If we continue on our current trajectory, 1,400 American towns and cities will eventually, inevitably be lost to the ocean.

But when? Problem is, we don’t know. It’s likely in the next several hundred years, but it could be a thousand. The science is maddeningly difficult to nail down. It’s not exactly enough to get people fired up.

But! It turns out rising sea levels don’t have to rise very much before they get annoying, and then burdensome, and then overwhelming. This fact is well-captured in some interesting new research from NOAA scientists William Sweet and Joseph Park. (Over on Mashable, reporter Andrew Freedman has a great write-up.)

Rather than focus on average sea level, researchers focused on the frequency of “nuisance-level” flooding events, defined as water one or two feet higher than local high-tide level. (The name is deceptive — it’s expensive to clean up and repair after such events, especially if they reach vulnerable infrastructure.) Two important insights emerged.

First, the frequency of nuisance-level flooding is rising faster than average sea level, and on a non-linear trajectory. Such floods are already five to 10 times more common than they were 50 years ago. Long before the sea rises far enough to literally swamp coastal towns and cities, it will rise enough to bedevil them with frequent floods.

Second, lots of American cities and towns are on the verge of serious trouble. The researchers identified 30 or more days of nuisance-level flooding a year as a “tipping point,” the level at which flooding goes from burdensome to overwhelming. The tipping point has already passed in some places and it’s rapidly approaching in others.

In addition to [Washington] D.C. and Annapolis, Maryland, other cities that will soon exceed their tipping points include Baltimore, Maryland; Charleston, South Carolina; and Atlantic City, New Jersey. These locations should pass the 30-day flood-frequency benchmark within the next five years, the study found.

Here’s a handy chart showing just when your city is f*cked! 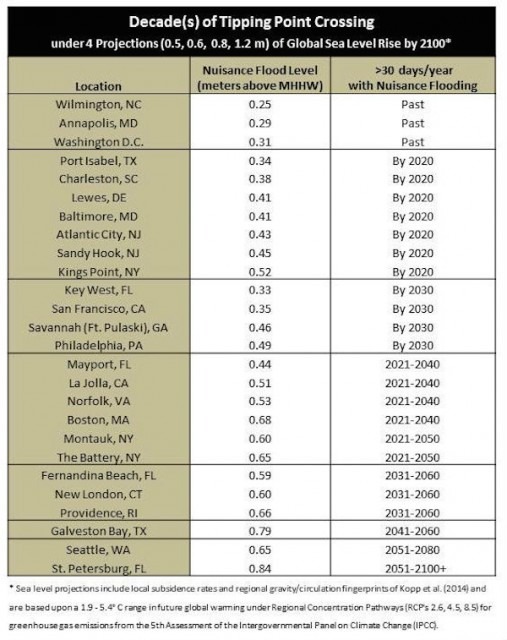 The last word on this goes to Freedman:

The study is a warning to decision-makers in many coastal areas that they need to think more proactively about protecting their critical infrastructure from coastal flooding, rather than assuming that most of the impacts of sea level rise will be delayed until the end of the century.

The study, as well as a recent report from environmental advocacy group Union of Concerned Scientists (UCS), shows that floods reaching such heights are becoming the norm — rather than an outlier — in many places.

The UCS report, for example, warns that flooding at high tides may become so common along the East Coast that “sections of coastal cities may flood so often they would become unusable in the near future.”

What about the somewhat farther future? Sweet says that “by 2100, most coastal locations analyzed in the [NOAA] study are predicted to have almost daily flooding.”

Daily flooding. That will be fun.

In light of this background, let’s quickly check out a couple of stories from one of the cities that will be first in line for flooding damage: Miami.

Start with this story by reporter Nick O’Malley. The purported focus is the effect of rising seas on South Florida, though under cover of that topic O’Malley manages to squeeze in a considerable amount of political background on climate. It’s a great story, but in this blogger’s humble opinion, he rather buried the lede.

In the latter half of the story he talks to Harold Wanless, chair of the Department of Geological Sciences at the University of Miami, about why South Florida is so vulnerable to even small increases in sea level. What should be done about it?

Wanless believes the hundreds of millions of dollars that have already been spent of flood mitigation infrastructure around Miami have been wasted because the sea cannot be held back.

“We are in the position where we think we are going to fight it and win. We are not going to win.”

Soon, he believes, insurance companies will stop underwriting homes in the worst affected areas and then owners will be unable to sell.

Money should be saved for moving people away while all levels of government work to reduce emissions, he argues.

So the head of the Geology Department at the University of Miami thinks that large swathes of Miami should be abandoned, starting now. OK!

These decisions are going to press themselves on Miami more and more unavoidably, within our lifetimes. So far the city’s response is … not entirely rational, as this darkly humorous Washington Post story reveals. To raise money to build the $300 million storm-water project they desperately need to deal with increasingly frequent flooding, they need property tax revenue, so they’re allowing a bunch of high-end condos to be built … on Miami Beach, one of the nation’s most vulnerable flood plains. D’oh.

Miami Beach Mayor Philip Levine says, “We’re showing the world, the investment community — what we do works. That brings calm, comfort and security to everyone.” I picture him wiping flop sweat off his forehead, looking nervously over his shoulder.

When wealthy areas of Miami become uninhabitable — which could happen within decades — it’s going to make a splash. Half the people in America live within 50 miles of a coast! Maybe getting repeatedly smacked in the face by floods is finally going to wake the public. One can hope.

This was an epic year for droughts, floods, and extreme weather