Stick your hand over a lit stove and you can get a feel for 2014’s overall climatic situation: scorching heat. For months, experts have been predicting this will be the hottest year in recorded history, and while in the end it might not quite achieve that ignoble record, it will be way up there (perhaps at No. 3).

The thermostat could’ve seemed low in your neck of the woods — meaning America’s East Coast and Midwest and the Falkland Islands — but temperatures were sweltering in the rest of the planet. Take a look at these abnormally high and record-hot readings, which represent a 1.2 degrees Fahrenheit deviation above the historical average. Notes the National Climatic Data Center: “This was the warmest January-November in the 1880-2014 record, surpassing the previous record set in 2010 by 0.02 degrees F.” 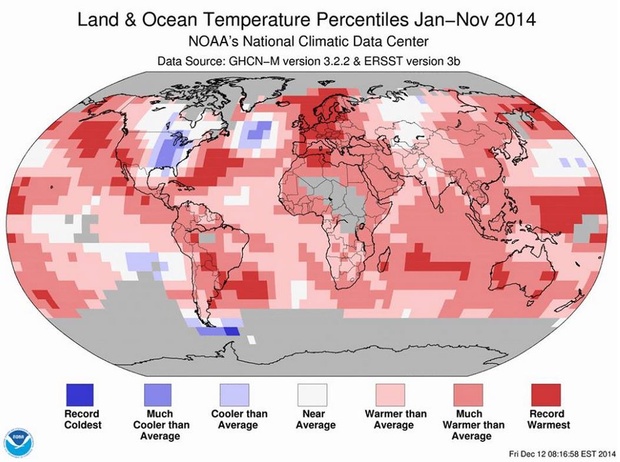 Not surprisingly, there were plenty of eye-popping weather and climate events this year, beginning with …

A major heatwave bedeviled the nation’s topmost state for the beginning of the year, leading to wet, crushing avalanches like the one above on Richardson Highway. Here’s a fly-over showing the huge extent of the mucky collapse:

With temperatures as much as 40 degrees above average, several sled-dog races were canceled for lack of snow and the fear onlookers would fall through thin river ice. Perhaps somebody should’ve organized a marathon instead, as the “all-time warmest January temperature ever observed in Alaska was tied on January 27 when the temperature peaked at 62 degrees F (16.7 degrees C) at Port Alsworth,” according to the Weather Underground.

Alaska wasn’t the only place suffering from aberrant warmth. In Melbourne this January, the mercury practically shattered the thermometer at an infernal 109 degrees. The scorching sun had players at the Australian Open volleying vomit instead of tennis balls and, in the case of Canada’s Frank Dancevic, hallucinating about Snoopy before passing out. A scientific report this same month piled on the bad news, saying Australia should brace for more run-ins with brutal heat if carbon emissions continue at their billowy rate.

By February, the arid spell helped the spread of major wildfires around Melbourne, which from the air looked like a flaming nightmare:

The vortex that shall not be named

The winter of 2014 was stalked by a glacial presence the media dubbed the “Polar Vortex,” which in fact was probably located elsewhere on the planet. What wasn’t in dispute is that things were horribly cold through much of North America, with temps as much as 35 degrees below average for the eastern two-thirds of the country. The shivering and long-lasting cold snap helped the natural-gas market reach a five-year high, hitting $6.25 on Feb. 19.

Recent rains alleviated a little of the West’s thirstiness, but California remains in a mortal struggle with drought. The state just lived through its driest three-year period in at least 1,200 years, with agricultural pumping and natural causes to blame. (Scientists believe the changing climate will make the West even hotter and drier in the future.) A line of dismal milestones was passed in the descent into crisis: Officials begging people to ration water, reservoirs dropping to record-low levels, the physical mass of California itself shrinking due to disappearing H2O.

If you’re wondering why hamburger was 20 percent more expensive this year (and next year, why produce costs so much), blame the pernicious dryness. And food woes are likely to worsen if the West gets a repeat of 2014. “The general mood is, ‘We’ll get through this year, but who knows about next year?'” said one irrigation-company worker. “If there’s another severe drought, the face of farming is going to change.”

Further south, cities like São Paulo, Brazil, we should note, are in much the same boat.

One hell of a tornado encounter

Tornado activity was anemic in the U.S., with about 400 fewer twisters than the annual average of 1,260, notes the Capital Weather Gang. Yet a couple incidents stood out as examples of these terrifying spinners’ power: A late-April outbreak dropped a bevy of tornadoes onto the nation’s midsection, killing nearly three-dozen people and leaving several chicken farms looking like they’d incurred a gas explosion. And in May, oil workers had an unbelievable brush with a monumental pillar of whirling debris that ripped through their camp in North Dakota, damaging more than a dozen trailers. This is, officially, the Weather Video of the Year; the fact that these leathernecks are laughing makes it all the more surreal (profanity ahoy):

Waves lapping at boot soles could become a common occurrence in the coming decades, to believe a July NOAA report. Researchers predicted the number of days with nuisance floods — ones that inconvenience the public with stuff like road closures and infrastructural damage — will rise by as much as 925 percent along the U.S. East Coast. 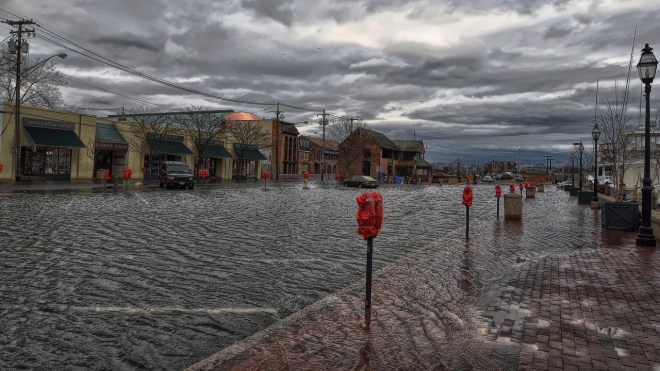 “Flooding now occurs with high tides in many locations due to climate-related sea-level rise, land subsidence, and the loss of natural barriers,” said oceanographer William Sweet. “The effects of rising sea levels along most of the continental U.S. coastline are only going to become more noticeable and much more severe in the coming decades, probably more so than any other climate-change related factor.” 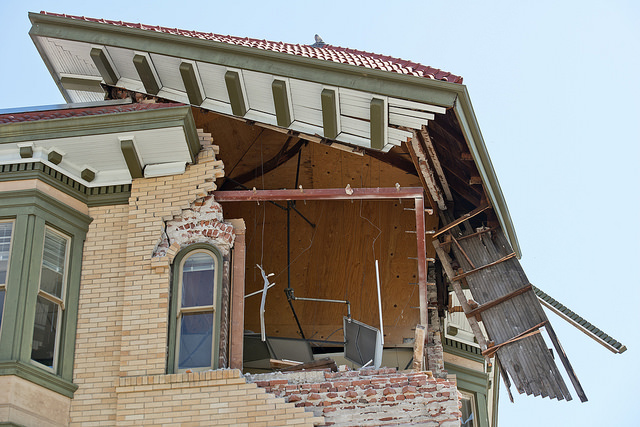 It wasn’t the Big One, but a magnitude-6 earthquake on Aug. 25 near Napa, Calif., injured roughly 250 people, triggered a bad rash of gas fires and water breaks, and sent innumerable wine barrels and bottles crashing to the floor in sad, crimson cascades. The total damage is expected to top $2 billion. It was the most powerful quake to hit the Bay Area in a quarter-century; scientists have predicted Napa’s next one will be even shakier and more devastating.

The year’s priciest weather was not a city-crumbling earthquake or roaring hurricane, but a stretch of bad rain on the border of India and Pakistan, according to Property Casualty 360. A steroidal September monsoon dropped more than a foot of water on the region, killing about 650 people and damaging 375,000 buildings. When the skies cleared, the two countries were left looking at devastation amounting to $18 billion or more, making these storms the most expensive natural disaster in India, ever.

India didn’t have good meteorological luck in 2014. In October, Cyclone Hudhud roared out of the ocean to tear into the southern Andhra Pradesh state, destroying thousands of homes, killing more than a hundred, and leaving damage so severe in Visakhapatnam that a rescue worker said it could take “at least 100 years to rebuild our beautiful city,” according to the Hindustan Times. Hudhud’s punch left an $11 billion dent in India’s economy, making it the costliest cyclone in the country’s history.​

Buffalo uses all its snow days at once

In the middle of November, parts of the Buffalo region got pounded by a one-two-three series of lake-effect knockouts. Even for a metro area used to powder dumps, these storms were surprising, looking like a vengeful god was spraying the region with an almighty snow blower. Accumulations in some areas topped seven feet. Here’s some footage of one of the narrow but intense snow bands coming off Lake Erie:

In November, the U.S. and China announced they’d work together to curtail greenhouse-gas emissions—a move of no small significance, given that these countries plus the European Union “emit about as much each year as the rest of the world combined,” according to the World Resources Institute. Here’s more on the deal:

As part of the agreement, Mr. Obama announced that the United States would emit 26 percent to 28 percent less carbon in 2025 than it did in 2005. That is double the pace of reduction it targeted for the period from 2005 to 2020.

China’s pledge to reach peak carbon emissions by 2030, if not sooner, is even more remarkable. To reach that goal, [Chinese President President Xi Jinping] pledged that so-called clean energy sources, like solar power and windmills, would account for 20 percent of China’s total energy production by 2030.