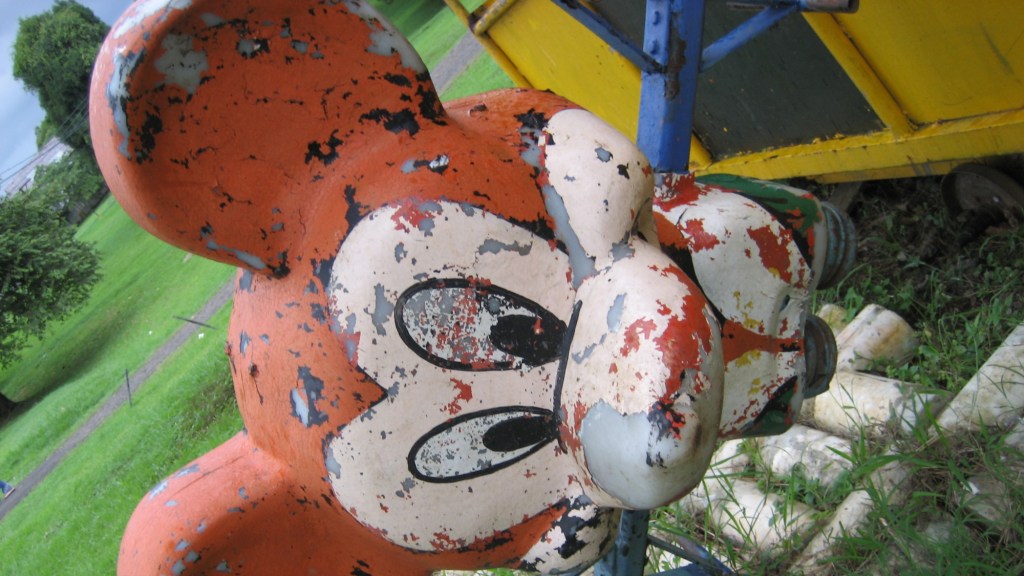 Mickey seems to be getting desperate for cash as he gets on in years. chuck holton
Climate & Energy

A Radio Disney station in Ohio recently teamed up with the state’s oil and gas industry on an “educational program” promoting resource extraction — from Never Land to Gasland, you might say. The partnership made many parents and environmentalists unhappy.

The program, called Rocking in Ohio, went on a 26-stop tour of elementary schools and science centers across the state last month. It involves interactive demonstrations of how oil and gas pipelines work, and is led by three staffers from Radio Disney’s Cleveland branch. It is entirely funded by the Ohio Oil and Gas Energy Education Program (OOGEEP), which gets its money from oil and gas companies.

Radio Disney of Cleveland and its road crew promoted the Ohio Oil and Gas Energy Education Program, with games pitting all ages of children vs. their peers and even families vs. families and dads trying to beat other dads in a variety of challenges. All the challenges, except perhaps the dads’ dance competition, related back to the science behind oil and gas production and their value as natural resources. …

One of the challenges was “literally creating our own pipeline,” [said Jag, the Radio Disney master of ceremonies], using balls and tubing to demonstrate “how we get oil and gas to your home.”

As contestants shot balls through the “pipeline” to end up in colored pails at the other end, Jag encouraged the audience, “Cheer these guys on like crazy.”

“I don’t think it’s doing the children or the state of Ohio any good,” Robert Shields of the Sierra Club’s Ohio chapter told Al Jazeera. “Kids’ ability to reason is not yet quite established, so it feels to me that they’re getting some kind of propaganda.”

After concerned citizens started protesting and circulating petitions, Disney backed out. Here’s the latest from the Cleveland Plain Dealer:

The Cleveland-based Radio Disney station will no longer participate in an educational program sponsored by Ohio’s oil and gas industry, after protests by environmental activists snowballed in recent weeks.

The Rocking in Ohio program raised eyebrows and outrage among parents and environmental advocates who say the program activities constituted propaganda.

A Disney spokesman provided the following statement to Northeast Ohio Media Group: “The sole intent of the collaboration between Radio Disney and the nonprofit Rocking in Ohio educational initiative was to foster kids’ interest in science and technology. Having been inadvertently drawn into a debate that has no connection with this goal, Radio Disney has decided to withdraw from the few remaining installments of the program.”

But that’s not the end of the roadshow. Rhonda Reda, director of the Ohio Oil and Gas Energy Education Program, said the controversy was “blown out of proportion” and the program will continue without Radio Disney.