E.O. Wilson answers your questions about GMOs, ants, the Pope 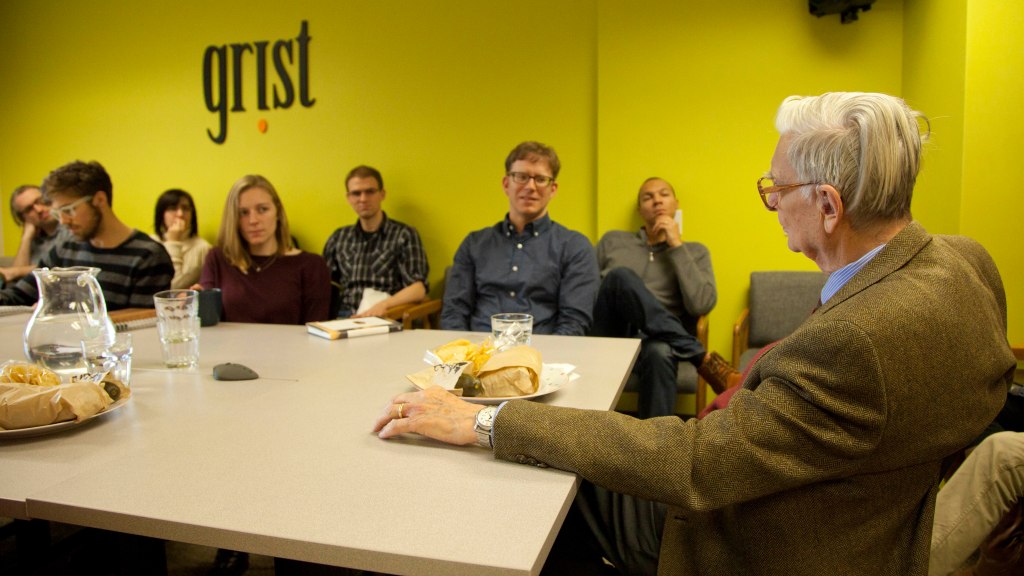 E.O. Wilson answers your questions about GMOs, ants, the Pope

This afternoon, the Grist office piled into our conference room for a brown-bag lunch and chat with E. O. Wilson, an American biologist, researcher, and public intellectual, often heralded as the father of biodiversity and the world’s leading expert on myrmecology (the study of ants). Wilson is on tour to talk about his new book, the humbly titled The Meaning of Human Existence. In other words, he’s a very big deal — even outside of the ant world.

And though we wanted to spend a large fraction of our allotted time trying out our Formicidae jokes, (“What do you call an ant who always does what he’s told? COMPLIANT!” HA! We would all laugh and have a merry time) we held back. Instead, we kept things professional by taking some of your questions and, between bites, posing them to Wilson. Thanks for helping us sound smart, y’all. Here are the edited versions of his surprising answers:

Wilson: You mean establishing national parks in Manhattan? It can’t be done. But lots of undeveloped land and sea still remains to reach the one-half mark.

Wilson: I haven’t been back there in a long time. There’s a good chance that, even though this is a fair distance north in what was primeval, very old mature forest, it might’ve now been overtaken by cultivation.

@grist
EOWilson = HERO
How does he feel about R-Up Ready GMO's?
And does R-Up kill insects & microbes in soil (+weeds)?
What's the remedy?

Wilson: Each GMO technology needs to be carefully monitored, one at a time. And where they pose no great problem, we should go ahead with them, because in general the benefits vastly outweigh the risk. I did a study of GMOS about 15-20 years ago when the  conflict first began and I could find very little reason to suppose that they were a menace to people or environment that they were thought to be.

The problem in the case that you mention is corn. The food plant – milkweed — is being wiped out by the spread of corn, mostly grown for biofuels – that oughta tell you something about what’s wrong about the human species. In so doing, we’re taking away the food source of the iconic monarch butterfly. I hope when the tipping point comes, we remember things like that.

@grist Is it true that ants can carry 10x their body weight in emotional baggage?

Wilson: Yes. Because they have almost no emotion. The only one I’ve ever observed directly is anger.