If you were in Paris or Madrid as June transitioned to July, you could be forgiven for thinking you had been transported to the equator, as temperatures across Western Europe soared over 100 degrees F, toppling records during major sporting events like the Tour de France.

The unusually early surge of summer heat was almost certainly affected by the overall warming of the planet, which has at least doubled the chances of such a heatwave, a group of scientists working with Climate Central, as part of its World Weather Attribution program, has concluded.

One of the clearest findings of climate science has been that heatwaves will become more common, more intense, and longer as a result of global warming. Heatwaves today are already happening in a world that is 1.6 degrees F warmer than at the beginning of the 20th century. Warming has also influenced the way that weather patterns, including those that usher in heatwaves, behave.

A previous Europe-wide heatwave in 2003, for example, contributed to the premature deaths of an estimated 70,000 people. Early summer heatwaves like the most recent one can be particularly harmful as people haven’t yet had time to adjust to higher summer temperatures.

The team of scientists working with Climate Central is attempting to look for the fingerprints of warming in heatwaves and other extreme weather events as part of a burgeoning field called extreme event attribution. While most such sleuthing efforts have happened months or years after an event, this group aims to do its analyses during or closely following an event.

In this case, the scientists looked at how much more likely the extreme temperatures recorded across Europe were during this heatwave because of warming, and found clear indications that it upped the odds.

The recent heatwave was the result of a mass of hot air from over the Sahara Desert pushing up across the Iberian Peninsula and then spreading over the rest of Western Europe, sending temperatures over a wide swath of the continent northwards of 95 degrees F.

After the peak, but while the heatwave was still ongoing, the group started its analysis, using observed temperatures from previous days and forecast temperatures for the remainder of the event.

It was “the first time we have done something even while it was still unfolding,” Friederike Otto of the University of Oxford said. The aim was to be able to say something about the role of warming while people were still talking about the event.

They looked at five cities — De Bilt in The Netherlands, Madrid, Mannheim in Germany, Paris, and Zürich in Switzerland — because “they were forecasted to be hotspots of the heatwaves” and had long, reliable temperature records, Otto, who led the modeling effort, said.

The team conducted two independent analyses. One looked at the historical temperature record and compared how often such severe heatwaves occurred a century ago versus today using three-day averages; the other used climate models that simulate a world with and without warming to see how the odds of such an event shifted.

Both methods showed that climate change made such events more likely, though the exact numbers differed. After the heatwave broke, they ran the numbers again using the observations for the days that were initially forecast. While the odds shifted because of temperatures that came in hotter or colder than expected, the overall trend was the same: Extreme temperature events are happening more often.

How much the odds shifted and how common such events are varies from city to city. Paris, for example, historically sees such high temperatures more often than Mannheim, Germany. The observational data suggest that such a heatwave was a 1-in-10 year event in 1950, but is now a 1-in-3 year event for Beauvais-Tille, a town outside Paris that excluded urban heat island effects.

In Mannheim, it has gone from a 1-in-240 year event to a 1-in-30 year one, compared to 1930. (The starting years varied from city to city depending on the quality of the records.) The change in odds for each city are listed in the chart below. 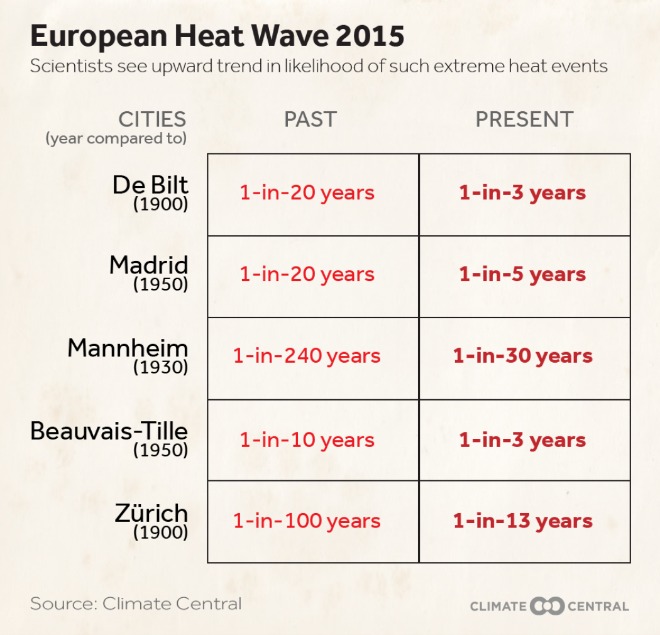 While this recent heatwave occurred earlier than usual and was widespread, it wasn’t nearly as bad as the one that blanketed Europe for weeks in 2003, an event also found to be more likely to happen in a warming world.

That event hit particularly hard in France, which prompted to the country to make major changes in how it handles extreme heat. Those lessons learned were clear this time around, with the government sending out numerous alerts and opening cooling centers so residents could find relief.

“Definitely in France the 2003 heatwave was a wake-up call, that this extreme heat is really dangerous,” Otto said.

“France certainly made a big, big improvement after 2003,” Maarten van Aalst, director of the Red Cross/Red Crescent Climate Center and part of the Climate Central team, said. The Red Cross in each country also issued alerts.

The team hopes that explaining how climate change is increasing the odds of such punishing heatwaves will drive home the idea that warming “has serious implications for our day-to-day life,” van Aalst said.

In the meantime, they will conduct deeper analyses of events they have studied in near or real-time and look for more events to probe as they happen.