To truly tackle climate change, we’ll need to mobilize Scrooge McDuck-level rivers of cash — and most of it will need to flow to developing countries. But most wealthy countries have committed only paltry sums to this end so far, despite signing a 2010 pledge to raise $100 billion annually by 2020. It may not be 2020 yet, but if you’re India or Vanuatu, the current trend doesn’t make for a lot of faith in Uncle Scrooge.

Last week, a group of the world’s largest development banks took a step that might help build a little more confidence. The group of 28 banks, which includes heavy hitters like the World Bank and the Asian Development Bank, announced that they would streamline their approaches to tracking climate change adaptation finance by adopting uniform and transparent formulas for their projects. It’s a simple agreement but an important step toward building trust in climate finance — and for the banks involved, a step toward building trust in one another’s numbers.

From a statement by the banks:

By increasing transparency of climate finance flows, the agreement … for tracking climate finance will help to build confidence that money is flowing to help deal with this major global challenge.

It is an important signal ahead of this year’s COP21 conference in Paris that aims to deliver a global agreement on climate.

The current lack of faith in climate finance mirrors a broader skepticism of the U.N. climate negotiation process. (Last week, Nobel laureate in economics Joseph Stiglitz called the upcoming Paris talks “a charade.”) Regaining faith in funding is seen by many to be crucial for a successful outcome in Paris this December.

Part of the problem is that it isn’t always clear what counts as adaptation finance. “Climate resilience and adaptation are intrinsically linked to development,” wrote the banks in the text of their initiative. “This may make it challenging to identify what can be defined solely as adaptation finance, and has resulted in different approaches and methods for tracking and reporting.”

Furthermore, funding for adaptation is only one small segment of total climate finance. Most of the money goes toward climate change mitigation — that is, toward greenhouse gas emissions reduction and general decarbonization projects. But for developing countries where climate change is already wreaking havoc, adaptation projects are critical.

The initiative is also touted as a step toward simplifying a convoluted network of funds and financial institutions that make up climate finance. See the following diagram for a hint of the complexity at hand (the red circle highlights the multinational development banks participating in the new agreement): 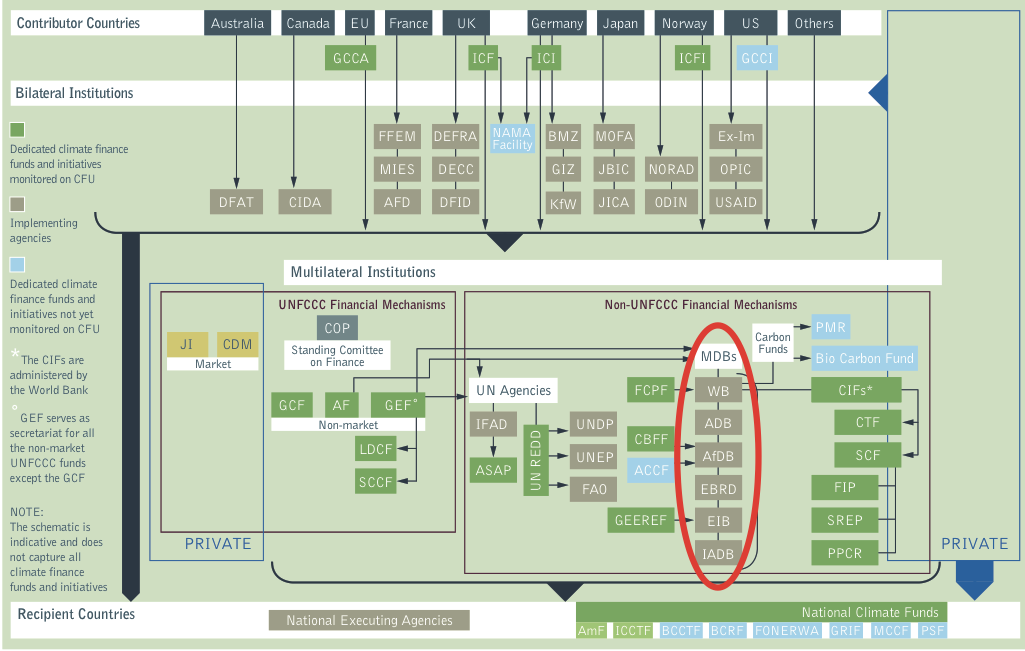 Which isn’t to say that the agreement isn’t important. Initiatives like this one can show which groups are pulling their weight, and that kind of transparency can breed accountability. Now if we could just convince the banks to actually phase out fossil fuel subsidies …

Your plane’s ETA is wrong, and it’s the climate’s fault