A decision on whether to allow the Keystone XL pipeline to be built in the U.S. could come at any time, but there are myriad other projects on the table designed to do exactly what Keystone XL was designed to do: transport Canadian tar-sands oil to refineries.

Those pipelines, both in the U.S. and Canada, are being designed to move the oily bitumen produced from the tar sands to refineries in Texas and eastern Canada, and to ports on the Pacific Coast where the oil could be shipped to Asia. 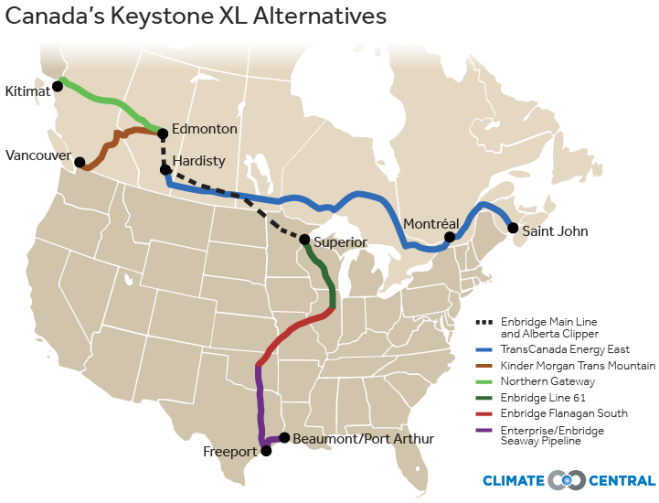 Combined, the pipelines would be able to carry more than 3 million barrels of oil per day, far in excess of the 800,000 barrels per day that TransCanada’s Keystone XL is designed to carry.

Canada is sitting on about 168 billion barrels of crude oil locked up in the Alberta tar sands northeast of Edmonton — a trove of carbon-heavy fossil fuels bested in size only by oil reserves in Venezuela and Saudi Arabia. Today, the roughly 2 million barrels of tar-sands oil produced each day in Alberta is sent to refineries in the U.S. and Canada via rail or small pipelines, none of which are adequate to carry the 3.8 million barrels of oil per day expected to be produced in the oil sands by 2022.

With Keystone XL’s future in question, Canada has a huge economic incentive to find alternative routes to markets. The tar sands represent a windfall of revenue for Alberta, which could see $350 billion in royalties and $122 billion in total tax revenue if they are fully developed over the next 25 years, according to Alberta government statistics.

But Keystone XL famously galvanized climate activists, and the Obama administration must approve the pipeline crossing in the U.S. The tar sands are one of the most carbon-heavy kinds of oil found on Earth, and processing and burning it will help accelerate an already rapidly changing climate, scientists say. Of course, the U.S. already refines and burns tar-sands oil, but Keystone XL has become a symbol for accelerated tar-sands development to the detriment of the climate.

The U.S. Department of State, charged with the environmental review of the proposed pipeline, could decide at any time whether to green- or red-light the Keystone project. (President Obama’s recent veto of a bill requiring Keystone XL to be built did not halt the pipeline, only the effort by Congress to force the pipeline’s approval.) The pipeline has other controversies associated with it, including the possible contamination of the Ogallala Aquifer, the primary source of water across much of the Great Plains, if there is a spill. But if the Obama administration rejects Keystone, it will likely be on climate grounds.

As a way around those challenges, other pipelines are in the works. One pipeline is already operating and sending hundreds of thousands of barrels of tar-sands bitumen to Texas every day.

Experts, such as Stephen Kelly, a former U.S. diplomat and a visiting professor of public policy and Canadian studies at Duke University, say that the long-term outlook for Canadian oil-sands production is not closely linked to the fate of Keystone XL.

“Canada has ample financial incentive to find ways to get its oil to world markets, and it’s likely to find ways to build pipelines to its coast, despite opposition,” he said last year.

Keystone XL alternatives face their own set of challenges in Canada. They basically fall into three camps, said Monica Gattinger, a University of Ottawa political studies professor focusing on cross-border energy policy. Those include aboriginal opposition based on rights of First Nations peoples, principled opposition from those opposed to the climate impacts of developing the oil sands, and opposition from communities concerned about the local environmental impact of a pipeline.

Despite low oil prices today, the long-term economic outlook for the tar-sands oil and the pipelines and railways that will carry it to refineries is likely solid, Gattinger said. “To kill an individual project (like Keystone XL) and think that that’s the end of it is somewhat naive in my point of view,” she said. 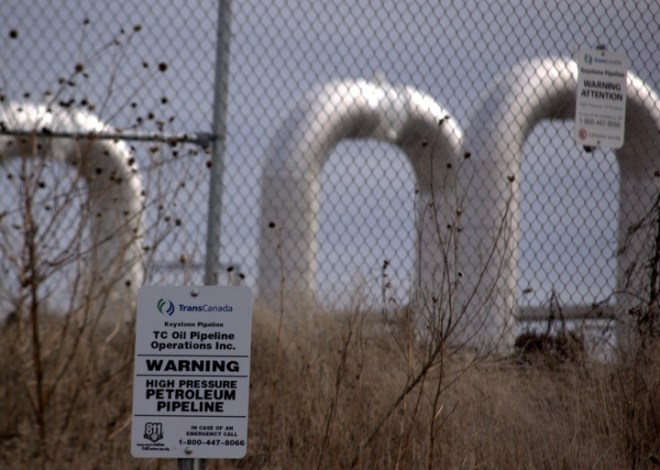 A TransCanada pipeline pump station in Nebraska. TransCanada is the company looking to build the Keystone XL pipeline.Shannon Ramos

These are the pipelines currently on the drawing board that will do much of what Keystone XL was designed to do:

As interest in the oil sands began heating up, Enbridge began increasing the capacity of the Alberta Clipper Pipeline, one of its main oil pipelines running southeast out of Alberta. The pipeline carries tar-sands oil from the Edmonton, Alberta, area to a terminal in Superior, Wis. Enbridge also plans to replace and upgrade another pipeline called Line 3, which runs parallel to the Alberta Clipper.

Where the Alberta Clipper and Line 3 end in Wisconsin, Enbridge’s newly expanded Line 61 Pipeline picks up, carrying tar-sands oil to the company’s Flanagan Terminal south of Chicago. Line 61, which originally carried 400,000 barrels of oil per day, was upgraded to 560,000 barrels per day in 2014, and the company is currently in the process of doubling its capacity to 1.2 million barrels of oil per day.

From the Chicago area, Line 61’s oil continues another 600 miles south to a major terminal in Cushing, Okla., via the new Flanagan South Pipeline. That then connects to the new Seaway Twin pipeline, which started carrying Canadian crude oil to Freeport, Texas, in December. At full capacity, the Seaway Twin will carry 850,000 barrels of oil per day, about the same as the Keystone XL.

Another Enbridge project, the proposed Northern Gateway Pipeline would take 500,000 barrels per day of tar-sands oil 731 miles in a different direction — to Kitimat, B.C., on Canada’s west coast, from Edmonton. The pipeline, at a cost of $6.5 billion, is expected to open up Asian markets for Alberta crude and is controversial for its possible environmental impact as it crosses the Canadian Rocky Mountains. Northern Gateway received government approval last year with 209 environmental conditions to meet.

First Nations tribes are mounting legal fights to stop the Northern Gateway from being built, saying it violates aboriginal land rights as fears about the impacts of possible oil spills from the pipeline galvanize more opposition. The project has lost momentum in recent months because of rising opposition and costs related to meeting the environmental conditions the Canadian government imposed on the project.

The Pacific Coast is also the destination for U.S.-based Kinder Morgan’s Trans Mountain Pipeline expansion, which would nearly triple the 300,000-barrel-per-day capacity of the existing 710-mile pipeline stretching from near Edmonton to Vancouver. Expected to carry 890,000 barrels per day of tar-sands oil to port en route to Chinese refineries, the $5.4 billion Trans Mountain Pipeline is currently being reviewed by Canadian regulators, who are likely to decide whether to approve the project sometime next year. Kinder Morgan wants to finish construction on the project in 2017. 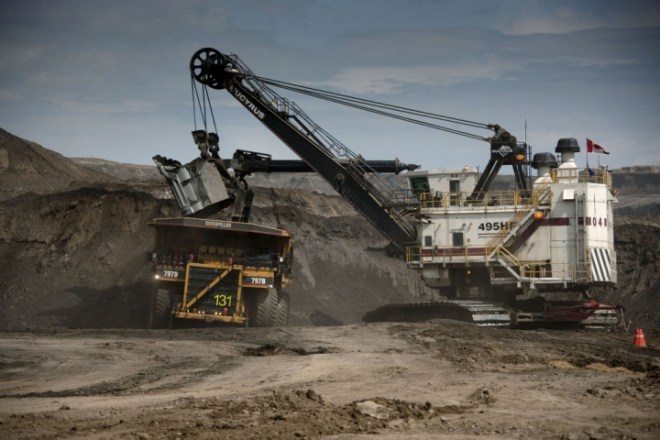 Like most of the other routes for tar-sands oil to get to refineries, the project could be held up by locals along the pipeline’s route who oppose the project. Most recently, residents in the Vancouver area have begun protesting Kinder Morgan’s plans to blast the pipeline through a mountain near Burnaby, B.C.

TransCanada is envisioning a $9 billion alternative to Keystone XL called Energy East that, if completed, will carry more than 1 million barrels of oil per day to Canada’s east coast. Much of the proposed 2,858-mile Energy East is already built, stretching from Saskatchewan to Quebec. TransCanada plans to extend the pipeline from near Montreal to refineries in St. John, New Brunswick, where the oil could be refined locally or loaded on tankers en route to other refineries along the Texas Gulf Coast or ports beyond.

Energy East, opposed by many environmental groups and First Nations people along its route, is slated for completion in 2018 and is under environmental and regulatory review by the Canadian government.

There are other pipelines in the works that could carry tar-sands oil to refineries. Enbridge plans to complete an expansion of a pipeline known as Line 9, that runs between Sarnia, Ontario, on Lake Huron to Montreal, giving Canada’s eastern cities greater access to Alberta’s oil.

Lastly, Alberta Premier Jim Prentice wants to build an oil pipeline from the Alberta tar sands to a port in Alaska, possibly following the McKenzie River Valley. It’s little more than talk at this point as no specific project has been proposed.