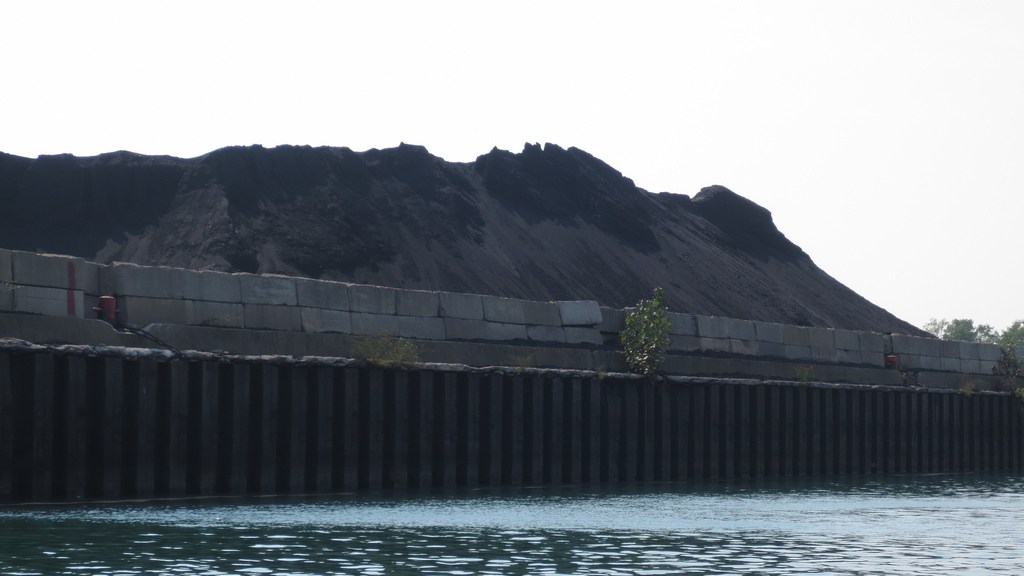 Petcoke piled up along the Calumut River in Chicago. Josh Mogerman
Climate & Energy

Residents of Chicago’s southeast side aren’t going to sit idly by as their city, state and federal governments try to protect them from byproducts of tar-sands oil refining — the black dust that’s been blowing over their homes from nearby petcoke piles. The residents have called in a team of lawyers, and they are going after the companies that produce and store the uncovered piles of carbon powder.

The petcoke is left over after the refining of tar-sands oil, most of which is coming into the Midwest from Canada. Petcoke can’t be legally burned as fuel in the U.S., but subsidiaries of Koch Industries have been buying up the waste across the country anyway, presumably for sale into countries with less strict air pollution laws. And two of the defendants named in the lawsuit are subsidiaries of Koch Industries, including KCBX Terminals, which is storing some of the piles of petcoke along the Calumet River.

Koch isn’t the only familiar name listed as a bad guy in the new lawsuit. BP is also named as a defendant. That’s because much of the problem petcoke is coming from the company’s nearby Whiting refinery, where billions of dollars have been spent to help it process Canadian crude. From a Nov. 15 Bloomberg story:

The 420,000-barrel-a-day Whiting plant brought online a new delayed coker, according to a person familiar with operations at the plant. Combined with a crude unit that started in June, the equipment will allow Whiting to process as much as 85 percent Canadian heavy crude, up from about 20 percent, the company’s website shows. The refinery is scheduled to ramp up heavy oil consumption over a three-month period, the company said in an Oct. 29 presentation.

The Chicago Sun Times reports on the lawsuit:

The suit, filed Monday in federal court, accuses BP, Koch Carbon, KCBX Terminals [another Koch subsidiary], George J. Beemsterboer Inc. and KM Railways of each knowingly and intentionally producing, marketing and selling the chemical mixture of petroleum coke instead of destroying it, with residue coating the homes and property of residents throughout the surrounding South Chicago neighborhood. …

As the U.S. is flooded with tar-sands oil from the mining boom up north, you can expect this problem will only deepen.