Which is why you should file this under this-will-not-end-well news. Despite a massive flood last year that triggered a natural gas explosion at Escambia County Jail in Pensacola, Fla., the Board of Commissioners recently decided to keep the jail in the same location instead of relocating.

On April 29, 2014, torrential downpours and flooding hit new records in Florida. Within 24 hours, Pensacola had received 20 inches of rain. It was Escambia County’s worst flood in 30 years. For those working and incarcerated in the county jail, the flooding was deadly. In the late hours of the following day, April 30, a natural gas explosion at the jail left two people dead and nearly 200 people injured. (The jail detained about 600 inmates at that time.) The explosion occurred after torrential rains flooded the basement and left the jail without electricity. Months later, in November 2014, a Grand Jury investigated the incident and found:

On April 29, 2014, the Pensacola area again received torrential rainfall which resulted in the basement of the Central Booking and Detention Center being flooded … The flooding of the basement caused the building to lose power and was generating on a diesel generator. The plumbing was no longer operational and food for the inmates was brought from the main jail.

… At approximately 2:15 am on April 30, 2014, the clothes dryers are seen on video pulling away from the wall and floating in the water. At about the same time, natural gas records indicate a substantial spike in the amount of natural gas flowing into the Central Booking and Detention Center. This spike continued throughout the day and night of April 30, 2014.

Both inmates and guards complained about the smell of gas to jail supervisors, but no one ever contacted the natural gas provider. The explosion — which destroyed most of the building — occurred around 11 pm on the night of April 30, 2014. 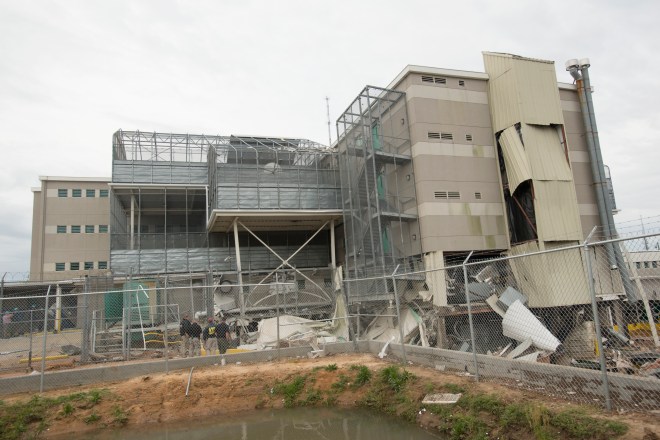 The aftermath of the gas explosion that demolished parts of the jail.REUTERS/Michael Spooneybarger

As you could imagine, the explosion left the people incarcerated (many of whom had not been convicted of a crime) and their family members traumatized. It wasn’t the first issue with flooding at the jail. In 2012, a similar incident occurred when a torrential rainstorm flooded most of the jail’s basement, resulting in substantial damage and the County needing to reconstruct parts of the jail. A year ago, the Grand Jury recommended that the County relocate the jail elsewhere because of the recent history of the location. It would’ve been a smart decision — seeing that this location is prone to serious flooding (in part thanks to climate change).

But last week, when the Escambia County Board of Commissioners were supposed to choose between three new locations for the jail, they decided to keep the same location and simply rebuild it there. Why would they do that? Well, during the public comment period, several (mainly small) business owners from the area testified that they did not want the jail moved and that the jail’s location was important for their business interests. But perhaps, I don’t know, the safety concerns about keeping the jail in a location prone to flooding should also be important? Although they didn’t go into much detail, the Board of Commissioners did discuss mitigating the effects of flooding as part of rebuilding the jail. I’m not exactly sure how they’ll do that, but hopefully we’ll find out soon!

Granted, not all of the other locations were perfect. One proposed location was a Superfund site, and many had questioned whether it would be safe to build a jail there. “It’s changing the land use the remedy was designed for … when they did the cleanup [on the superfund site], they did it for industrial use based on an eight-hour standard … people should not be allowed to live there 24 hours,” Wilma Subra, a chemist who advised local group Citizens Against Toxic Exposure, told the Pensacola News Journal.

Still, it doesn’t seem smart to rebuild a jail at a location that has had the same problem over and over again — a problem that has turned deadly. As the Human Rights Defense Center and Prison Ecology wrote to the Board, the jail’s location is undoubtedly a question of environmental justice: “To subject individuals caught up in the criminal justice system to heightened risks of adverse health impacts may present an environmental justice problem for this facility, being that incarceration has been found to consistently impact low-income communities and people of color disproportionately in every state of the country.”