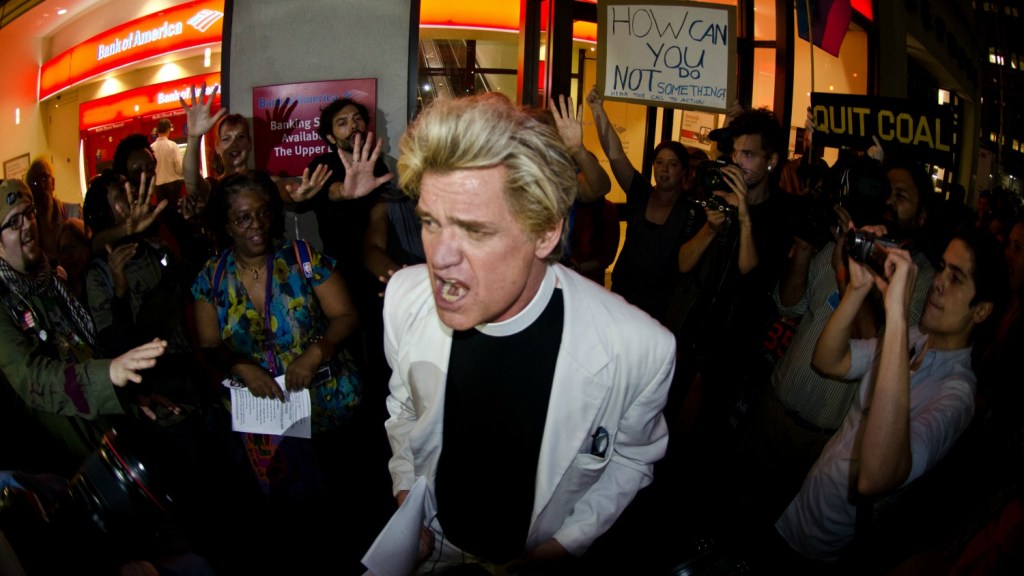 Last October, the Reverend Billy was arrested for preaching into a megaphone inside a branch of Chase Bank in Midtown Manhattan. He’d been accompanied by a gang of golden frogs — the first known species to become extinct as the direct result of climate change. The frogs and the Reverend were there to call attention, through singing and dancing, to Chase Bank’s ranking as the largest lender in the world for new coal plant construction.

Reverend Billy — an activist and performance artist actually named Bill Talen — is no stranger to arrest, but what happened next was unusual. Instead of the usual order to do community service, the District Attorney of the City of New York charged Talen and the group’s choir director, Nehemiah Luckett, with riot in the second degree, menacing in the third degree, unlawful assembly, and two counts of disorderly conduct. The Chase branch manager had told the DA’s office that he had mistaken the protest for a robbery, and that several bank customers and employees were reduced to tears by the experience. The two now risked serving up to a year in prison.

The next court date for the duo is Feb. 27. But in the meantime, the prosecution changed its charges and offered a new sentencing recommendation — one day of community service for Talen, and six months of not getting arrested for Luckett — if both agreed to plead guilty.

What happened in the meantime, and why did the prosecution change their tune? Talen recently answered my questions over the phone.

Q. Why do you think the DA asked for such a strict sentence the first time around?

A. Overcharging is a traditional approach by abusive police departments and district attorneys against political activism. It accomplishes several things at once: It makes you look bad and dangerous on the evening news. It causes turmoil in your family. For eleven weeks Nehemiah and I had this thing hanging over our heads. It causes long, fraught discussions around the dinner table about the consequences of your actions, about being the father of a three-year-old, about having to make a living. And the third thing is that it’s a broad attack on the First Amendment.

We’ve had 20 years of right-wing Republican mayors. Now, we’ve had a landslide victory for a traditional labor guy, and he was elected in a revolt against police tactics. New York City is a bad place to get arrested. So many Occupy Wall Street people were beaten up. If you’re a young person of color you’re at particularly great risk. Stop and Frisk was a campaign issue. We’re hoping that things will change around public protest. There’s an old NYC activist saying: You can beat the rap, but you have to take the ride. Well, we’re beating the rap, and we’re taking the ride. After this is over, we’ll turn to litigation and legislation.

Q. Were the charges any different between you and Nehemiah?

A. Mine were slightly worse, because they decided I was the ringleader.

Q. Well, you did have the biggest hair.

A.Nehemiah can get a pretty big afro going on. It depends on what point you catch him in the cycle.

We were also the only ones that got caught. They arrested us in the subway after the protest. Nehemiah and I were standing there with our big bag of toad heads. All the toads were gone.

Q. Since you’re going to trial, what kind of defense are you likely to use?

Q. There is often a defense that activists use, which is the necessity defense. It’s basically that you have to commit a smaller crime in order to prevent a larger one. The necessity defense is almost always turned down. Our judge has taken our proposal and given herself weeks to consider our motion. We have no idea what she’s going to say.

Activists also use the First Amendment defense, which is also often not permitted. Corporations will argue that because a protest is not in a public space, that it’s on the sidewalk, that isn’t permitted.

There’s a wave of these trials right now. The three women in Michigan. Vera Scroggins in Montrose, Pennsylvania. Those people in Oklahoma who dropped a banner filled with glitter, and now they’re trying to make up a new charge to serve them with: “terrorism hoax.” And Jeff Olsen, in San Diego, who was making political messages on the sidewalk outside the front door of the banks with colored chalk.  Although he was not protesting banks because of their role in climate change — just for all the other things they do.

What happened to him was somewhat similar to our situation. The whole town of San Diego rose up and defended Jeff. This skinny loner. There was such a rush of support that the city attorney said, “Under the law, this was graffiti. It should have been prosecuted, but we respect the community response.”

Q. But in your case the public may have defended you, but the Assistant DA said that they were lowering the charges because they had watched the surveillance tape again and decided that it looked more like a music number than a riot.

A. We think they may never have actually sat down and watched it before then. The video’s clear — our faces aren’t covered.

Q. Did you design the frog heads not to cover your faces specifically for that reason?

It’s all a mystery why they changed their minds. We don’t get to know.

Q. There was a change of administration.

A. There was a change of administration, but the District Attorney — supposedly there’s a firewall between him and the city government.

Q. What’s next? Other than your trial, I mean.

A. Our new performance is Honeybeelujah. We’re making hundreds and hundreds of bees. The toad was our spirit animal. Now it’s the bee.

In all of these other cases across the country, I feel tremendous camaraderie with these people. And it is because of the risk of arrest. This is not signing an electronic petition… It’s becoming a fetish for Big Oil and feeling the force of it mobilize against you.  Walking into the force of that response is making a new climate movement.

The average American hasn’t connected banks with climate change. We have to risk life and limb for the earth. Every movement that made change in this culture has had people putting themselves into this kind of danger.