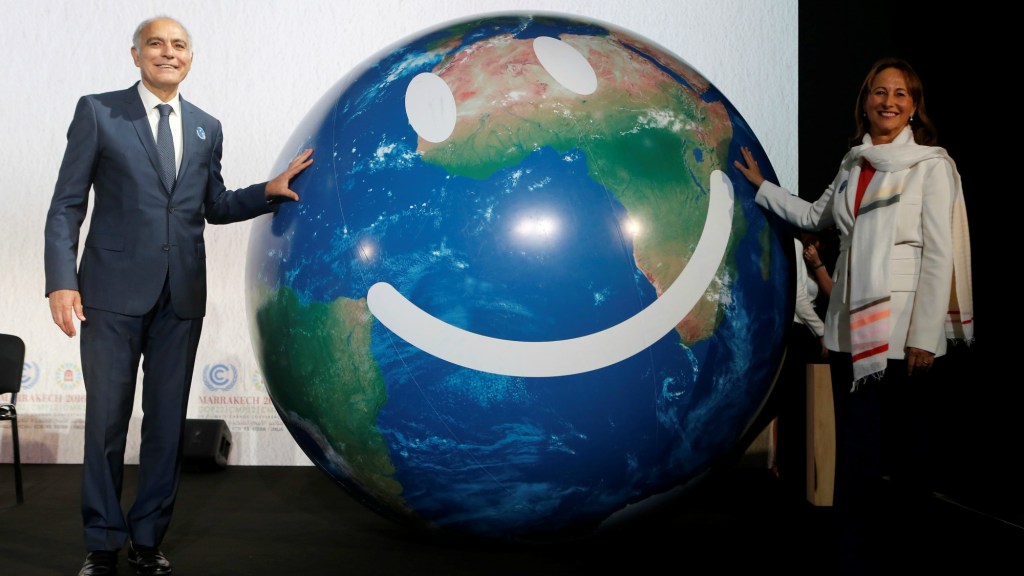 Negotiators from around the world are currently gathered in Marrakech, Morocco, for the annual U.N. climate conference, where they’re working to put last year’s landmark Paris climate accord into action. Donald Trump’s win is putting a bit of a damper on their mood.

Trump has said he intends to pull the United States out of and “cancel” the Paris deal, end international climate funding, and repeal President Obama’s key efforts to curb climate pollution. He’ll be the only major world leader who doesn’t accept the science of climate change. So his impending presidency does not bode well for global climate action.

Ségolène Royal, outgoing president of the U.N. climate forum and France’s environment minister, said that Trump “cannot prevent the implementation” of the Paris Agreement, which took legal effect on Friday. She pointed out that the United States has to wait at least three years before formally seeking to withdraw from the accord.

Of course, Trump could just ignore the deal and fail to live up to the pledges the United States made in Paris.

Still, many of the conferees in Marrakech are trying to put on a brave face and take the long view.

What I'm hearing from Marrakech: Shock, discouragement and lots of ppl saying they are going to keep fighting on climate action #COP22

“In politics, we know that the pendulum swings from one side to the other, but we know that the science is moving in just one direction,” said Mariana Panuncio-Feldman, senior director of international climate cooperation at World Wildlife Fund. “We know that yesterday’s election is undoubtedly going to affect the tone of the negotiations, but we know that the task that we have in front of us remains the same.”

China can be expected to continue its efforts to fight climate change despite the election result, said Li Shuo of Greenpeace China.

Alden Meyer of the Union of Concerned Scientists, a nonprofit advocacy group based in the U.S., said that action will still happen in the United States, too: “Progress will continue to be made at the sub-national level in the U.S. — by states, by cities, by businesses across the country. … The drive to de-carbonize the U.S. economy will continue regardless of what a President Trump does.”

Thomas Hale, a professor of public policy at Oxford, argues in a piece at Climate Home that the “clever drafting” of the Paris Agreement will limit the damage that Trump can do to it, and notes that in four years, “a new president could instantly re-ratify the agreement after he or she comes into office.”

Myers also tried to draw some hope from the fact that Trump’s victory speech was more conciliatory and gracious than many of his comments during the campaign. “I hold out hope, as a person of faith, that he can grow as a person into this job and be a different president than he was a candidate. We need to encourage and build an expectation that President Trump will grow into this office and take a more responsible position on climate change than he has.”

Today's burning question at the #COP22: how to convince #Trump to "make climate great again" #USElection2016