The Paris climate accord is a big fucking deal, now more than ever 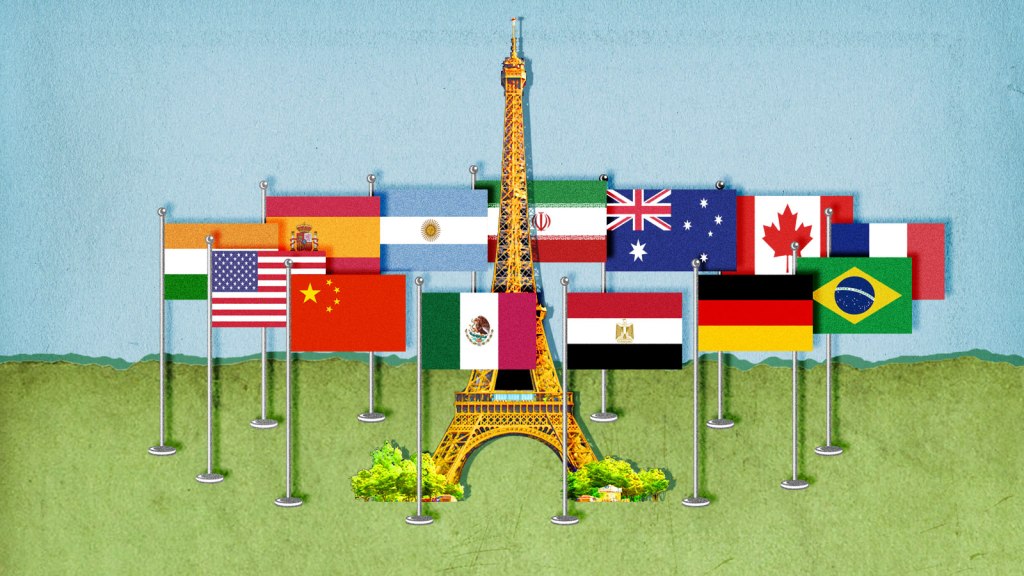 The Paris climate accord is a big fucking deal, now more than ever

On Friday, the landmark Paris climate agreement officially goes into force. The news will surely be buried under a mudslide of U.S. election coverage, but it shouldn’t be. Paris was and still is a BFD.

Last December, world leaders reached what’s been called the first truly universal agreement on climate change, because the signers account for virtually all of the planet’s greenhouse gas emissions. More importantly, it marked the first time top polluters like China, India, and the U.S. found a way past old divides and down a shared path toward a low-carbon future.

Now that agreement is taking effect much earlier than expected. Often countries take not just months but years to ratify major international deals. It took eight years to activate the Kyoto Protocol. But the Paris Agreement was ratified by enough countries for it to become binding in less than 11 months.

China, India, the European Union, and dozens of other nations got the job done fast in part because they wanted Paris on the books before the U.S. presidential election — not because it will change Donald Trump’s mind about opposing the deal, but because it sends a clear message: The world is behind climate action. You better be, too.

The Chinese government has even taken the unusual step of saying that the next U.S. president needs to take Paris and climate policy seriously. “I believe a wise political leader should take policy stances that conform with global trends,” said China’s climate chief Xie Zhenhua. “If they resist this trend, I don’t think they’ll win the support of their people, and their country’s economic and social progress will also be affected.”

Although the rest of the signatories to the Paris deal have been paying close attention to the United States, our politicians and media outlets have not been paying attention to Paris in return.

Just three days after the Paris Agreement was signed last December, CNN hosted a primary debate between Republican presidential contenders in which Wolf Blitzer neglected to ask anything about the climate deal (though Trump and John Kasich disparaged it without prodding).

Throughout both the primary campaigns and the general election, climate change has gotten little attention, and the Paris Agreement almost none. Did it matter whether candidates would work with our allies to make the 187-country deal a success or pull the legs from under it? Apparently, it didn’t.

But Americans need to know: Paris is huge.

It is a BFD that world leaders have agreed on ambitious goals: holding global warming to below 2 degrees C above pre-industrial levels, and ideally 1.5 C, which scientists say is needed to ward off the harshest impacts; peaking emissions as soon as possible and reaching carbon neutrality by 2050; spending hundreds of millions to help poor nations adapt and transition to climate change.

It is a BFD that countries once lukewarm on climate action have rallied around this agreement. Even a developing nation like India, which still needs to bring electricity to millions of citizens and help them out of poverty, is committing to a cleaner energy future.

It is a BFD that the U.S. and China found common ground in the lead-up to Paris and made the deal possible, forming a new bond around their shared efforts to fight the biggest threat facing humanity.

It is a BFD that the world’s nations have committed to remaking the entire global energy system. Rich nations are basically asking (and helping) developing countries to do something no developed country managed: Leapfrog coal, oil, and gas in favor of renewable energy. It’s no coincidence the oil industry is suddenly mindful of renewables again.

Of course, Paris has a lot of flaws and shortcomings, and as the world works to implement it, many what-ifs and hazards lie ahead. The most important components — emissions cuts and finance — aren’t legally binding, so the carefully negotiated deal could be eroded by political shifts. Brexit could make it more difficult for the E.U. to meet its promises. The Philippines is waffling on whether it will formally join the agreement, even though it signed on last December. And, yes, the U.S. election could send the whole process reeling.

Since the agreement is largely non-binding, it’s critical that the review process be as transparent as possible, because international peer pressure is essential to ensuring countries don’t miss the mark. For exactly that reason, countries don’t have a particular incentive to be transparent — which is one of Paris’ main challenges going forward.

Even if everything goes as planned and nations follow through on their first-round commitments, that alone won’t be enough to fend off the worst impacts of climate change. Countries will need to keep setting and meeting tougher goals, which will get increasingly difficult and expensive.

Nevertheless, the Paris Agreement is an essential, powerful start to what will be a long, fraught process.

The endless drama of climate change (not to mention international negotiations) is, let’s be honest, less sensational than the drama of the election. Slow, incremental change is a tough thing to fathom, much less to get excited about. The latest poll, the latest insult, and the latest email leak are easier to grasp and more fun to follow.

Even if it’s not as entertaining as a political campaign, what really counts is moving the clean-energy transition along as fast and seamlessly as possible. The Paris deal that comes into force today is helping the world do exactly that. That’s big, and that matters.