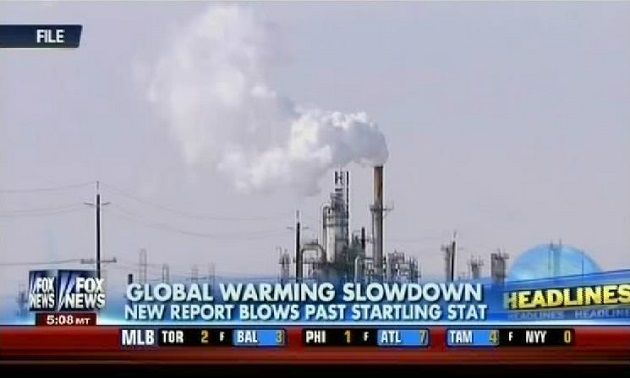 The latest data is out on the prevalence of global warming denial among the U.S. public. And it isn’t pretty.

The new study, from the Yale and George Mason University research teams on climate change communication, shows a 7-percentage-point increase in the proportion of Americans who say they do not believe that global warming is happening. And that’s just since the spring of 2013. The number is now 23 percent; back at the start of last year, it was 16 percent:

The percentage of Americans who believe global warming is human-caused has also declined, and now stands at 47 percent, a decrease of 7 percent since 2012.

At the same time, the survey also shows an apparent hardening of attitudes. Back in September 2012, only 43 percent of those who believed that global warming isn’t happening said they were either “very sure” or “extremely sure” about their views. By November of last year, that number had increased to 56 percent.

Overall, more Americans now say they have all the information they need to make up their minds about the climate issue, and fewer say they could easily change their minds:

The obvious question is, what happened over the last year to produce more climate denial?

According to both Anthony Leiserowitz of Yale and Ed Maibach of George Mason, the leaders of the two research teams, the answer may well lie in the so-called global warming “pause” — the misleading idea that global warming has slowed down or stopped over the the past 15 years or so. This claim was used by climate skeptics, to great effect, in their quest to undermine the release of the U.N. Intergovernmental Panel on Climate Change’s Fifth Assessment Report in September 2013 — precisely during the time period that is in question in the latest study.

As we have reported before, the notion of a global warming “pause” is, at best, the result of statistical cherry-picking. It relies on starting with a very hot year (1998) and then examining a relatively short time period (say, 15 years), to suggest that global warming has slowed down or stopped during this particular stretch of time. But put these numbers back into a broader context and the overall warming trend remains clear. Moreover, following the IPCC report, new research emerged suggesting that the semblance of a “pause” may be the result of incomplete temperature data due to the lack of adequate weather stations in the Arctic, where the most dramatic global warming is occurring.

Nonetheless, widely publicized “pause” claims may well have shaped public opinion. “Beginning in September, and lasting several months, coincident with the release of the IPCC report, there was considerable media attention to the concept of the ‘global warming pause,'” observes Maibach. “It is possible that this simple — albeit erroneous — idea helped to convince many people who were previously undecided to conclude that the climate really isn’t changing.”

“Even more likely, however,” Maibach adds, “is that media coverage of the ‘pause’ reinforced the beliefs of people who had previously concluded that global warming is not happening, making them more certain of their beliefs.”

As Maibach’s colleague Anthony Leiserowitz of Yale adds, it isn’t as though those who were already convinced about global warming became less sure of themselves over the last year. Rather, the change of views “really seems to be happening among the ‘don’t knows,'” says Leiserowitz. “Those are the people who aren’t paying attention, and don’t know much about the issue. So they’re the most open-minded, and the most swayable based on recent events.”

Journalists take heed: Your coverage has consequences. All those media outlets who trumpeted the global warming “pause” may now be partly responsible for a documented decrease in Americans’ scientific understanding.