As California limps through another nearly rain-free rainy season, the state is taking increasingly bold action to save water.

On March 17, the California state government imposed new mandatory restrictions on lawn watering and incentives to limit water use in hotels and restaurants as part of its latest emergency drought regulations. On March 19, California Gov. Jerry Brown announced a $1 billion plan to support water projects statewide and speed aid to hard-hit communities already dealing with shortages. Last month, federal water managers announced a “zero allocation” of agricultural water to a key state canal system for the second year in a row, essentially transforming thousands of acres of California farmland into dust.

The recent moves come after the state has fallen behind targets to increase water efficiency in 2015 amid the state’s worst drought in 1,200 years. Last year, voters passed a $7.5 billion water bond and the legislature approved its first-ever restrictions on groundwater pumping, which won’t go into full effect until 2025. Stricter, more immediate limits on water use are possible as summer approaches.

But it’s not enough. These moves are small potatoes compared to what’s needed to rein in statewide water use, of which agriculture forms the vast majority. Earlier this month, a pair of op-eds, one in the Guardian and the other in the Los Angeles Times, spoke with urgency about the West’s growing water crisis.

“California has no contingency plan for a persistent drought like this one (let alone a 20-plus-year mega-drought), except, apparently, staying in emergency mode and praying for rain,” wrote NASA water scientist and University of California-Irvine professor Jay Famiglietti. A better plan, he said, was for “immediate mandatory water rationing” across the state. Famiglietti’s work has focused on the shocking recent declines in groundwater across the West, where excessive pumping has caused the ground to sink at rates of up to one foot per year and a measurable rise in global sea levels.

Underlying the frantic, short-term search for water is an ominous underlying trend that threatens to fundamentally transform America’s most important agricultural state. Climate change may have already initiated a new megadrought.

But first, a reality check: California’s cities have more than enough water to withstand the current drought and then some. They simply don’t use that much. Not true for agriculture, which uses 80 percent of California’s water — 10 percent of that just on almonds. Though it’s still a national powerhouse, fed increasingly by fast-depleting groundwater supplies, the state’s agriculture industry has likely begun a long-term decline due mostly to simple math. Abnormally dry conditions have dominated in 11 of the last 15 years, and the cuts have to come from somewhere. Agriculture is the elephant in the ever-shrinking room of California water. 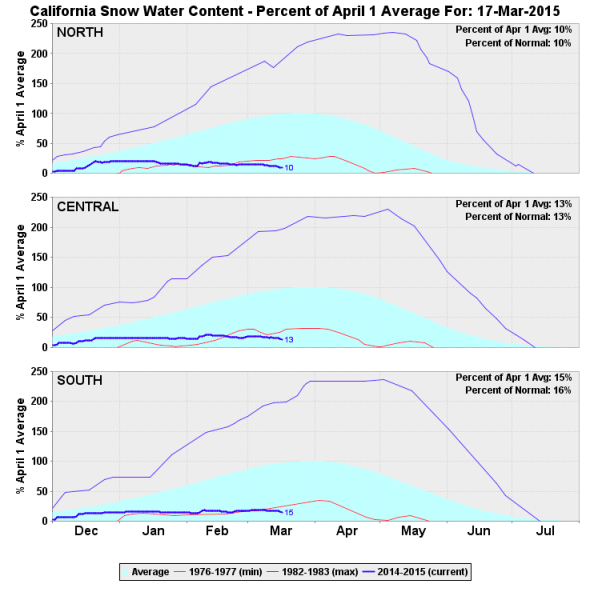 California’s record low snowpack threatens the existence of agriculture in the nation’s most productive state.California Department of Water Resources

Statewide, California’s snowpack is now at a record low — just 12 percent of normal, and less than half of last year’s astonishingly meager total. Normally, California’s snowpack holds the equivalent of about 15 million acre-feet of water around its traditional April 1 peak, about as much as all the state’s reservoirs combined. This year, it’s as if half of the state’s water reserves simply vanished. It’s difficult to imagine the hardship the state will face this summer as the rivers of snowmelt that normally feed the state during the dry season dwindle dangerously. As I wrote last year during my drought-themed reporting trip across the West, California just wasn’t built to handle a world without snow.

But it’s not just California. It’s been freakishly hot out West all winter. Other states are also suffering, with record-low water levels expected this year in the two major reservoirs on the Colorado River: Lake Mead and Lake Powell. The warm winter has helped to dry up the land even more, and preemptively melt what little snow has graciously fallen.

If a megadrought has already begun — and there is increasingly strong evidence to support that it has, or will soon — there will be widespread implications, including a significant re-shifting of California agriculture outside the state. The California of the past is gone, and climate change is bringing a new one faster than it seems we’re ready for.

Future Tense is a partnership of Slate, New America, and Arizona State University