House built to coexist with nature. Nature has had enough of house 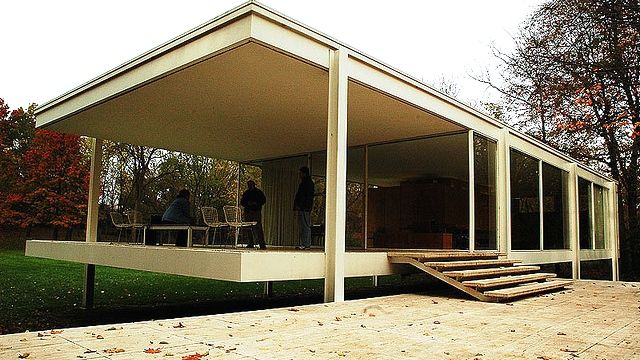 House built to coexist with nature. Nature has had enough of house

Influential modernist architect Ludwig Mies van der Rohe built Farnsworth House to provide a counterpoint to its natural surroundings. The be-stilted, glass and steel masterpiece was to rest harmoniously amongst the lush trees and gently flowing Fox River in the Illinois countryside. Then we did all that stuff with poisoning the planet and global warming and nature decided it didn’t want to be counterpointed anymore so it smashed the windows and flooded the place.

Now, floods that used to happen once a century seem to be going off more often than mattress sales, and like those sales, everything in the flood plain must go! But Farnsworth House isn’t just some double-wide you can move to higher ground. Moving the house would destroy it just as surely as leaving it would, so the good folks at the National Trust for Historic Preservation are considering putting the house on a ginormous hydraulic lift so when the rains come, the house can rise above the waters like a Baba Yaga’s hut on technological chicken legs.

Sadly, this ain’t some Russian fairy tale. It’s the future. Here’s more from the Chicago Tribune:

Confronted with the prospect of more flooding, the house’s owner is carefully weighing how to preserve and protect the house, two goals that potentially conflict. Keep the house where it is, and the river is almost sure to flood it again someday. Move the house away from the river to higher ground, and its authenticity would be compromised. Such are the choices in an era when disastrous “100-year floods” seem to occur every few years.

Is there a middle way? The owner, the Washington-based National Trust for Historic Preservation, believes it may have one. The trust is considering a daring plan that would temporarily move the house from its site, build a pit beneath it and insert hydraulic jacks that would lift the house out of harm’s way the next time the Fox attacks it. Or so goes the plan, which seems like something out of a science fiction movie.

Of course this is not the first time drastic actions have been needed to save an iconic structure. In 1999, the National Park Service moved the massive Cape Hatteras Lighthouse, and the way things are going, it’ll have to move again — along with threatened cultural treasures around the world.

On the bright side, if this works, we can just make the Statue of Liberty ride a 237 foot pogo stick.