In Michigan, protest with a purr brings out the law's claws 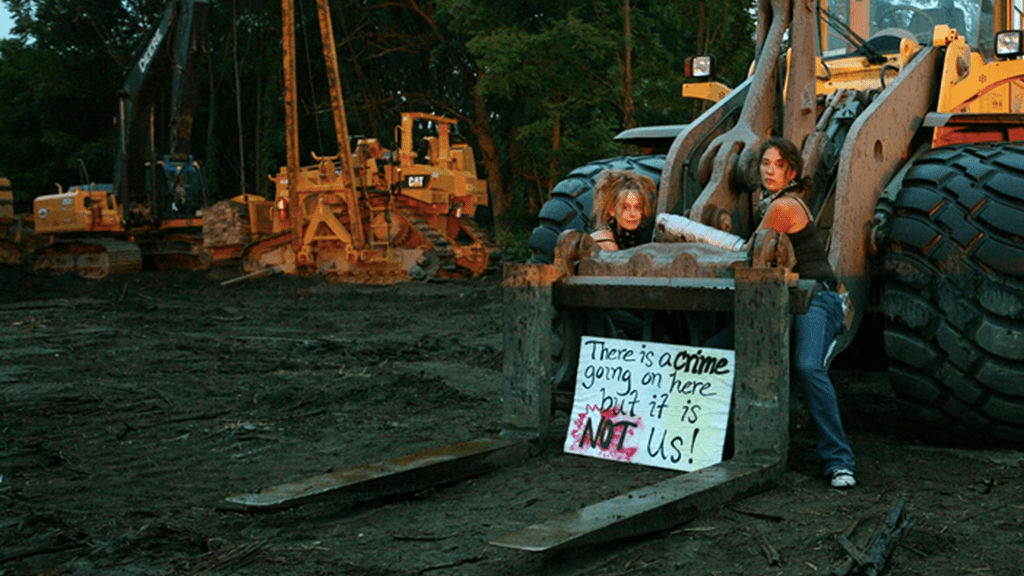 In Michigan, protest with a purr brings out the law’s claws

The women known as the Enbridge Three are in jail, which itself is unusual. Most people in their situation — convicted of a non-violent crime, but not yet sentenced — are out on bail, unless they’re deemed a flight risk. But nothing about this case is usual.

The three women face two to three years in prison for locking themselves down to construction equipment owned by Enbridge, a Canadian pipeline company. They are neither callow college kids nor protest addicts; one is a grandmother, another a great-grandmother. “The older I get, the less I have to say and the more I am free to do,” said Vicci Hamlin, the great-grandmother of the trio, after the verdict. “I am proud and yet humbled to do my small part.”

Enbridge is unusual, too: It’s considered one of the world’s 100 most sustainable companies (this year it was No. 75). It is the largest solar energy generator and the second-largest wind-power generator in Canada. “We recognize,” the company’s website reads, “that our relationship with hydrocarbons comes with great responsibility.”

Enbridge is also the company that in 2010 caused the largest inland oil spill in American history, when it dumped over a million gallons of heavy crude into Michigan’s freshwater supply and then failed to clean it up properly. The spill sparked a wave of protests, one of which led to the arrest and trial of the Enbridge Three. Their story illuminates the ways in which environmental activism, both in Michigan and across the country, has broadened — and how local governments are fumbling their reaction.

I grew up outside of Detroit, in a community not known for its environmental sentiment. We lived surrounded by factories and tool and die shops, which was excellent, because those were the institutions that had allowed our ancestors to experience the novel sensation of being middle-class. One of my older relatives told me that the area had once been marshland where people had gone pheasant hunting — which made sense, because the lawns were deceptive. If you stepped off the sidewalk and tried to walk across one, you would sink in mud up to your ankles.

That was not nature. Nature lived about a four- or five-hour drive away. Nature was the place that we went to on the weekends, to hang out in someone’s cabin and play cards, or get drunk and ride someone’s snowmobile in the winter or powerboat in the summer. Even the hippies I knew went to the woods to sit around and drink — just with a hand drum instead of a three wheeler. In science class, the teacher passed around an enormous blob of car enamel and told us it was “Chryslerite” — a substance formed in the corners of automobile painting rooms. Earth Day was celebrated, at most, with public service announcements on TV about the importance of using more energy-efficient lightbulbs, which just made us roll our eyes, because those things were expensive.

The Kalamazoo River spill is changing the Michigan I knew. A spill is not a factory, and after the pipe broke, the spill traveled over 35 miles downriver, through communities that saw no benefit in being near its path, and a lot to lose. At first the crude floated, but as the day went on, the solvent that had been mixed with it to keep it flowing through the pipe evaporated in the sunlight, leaving it to sink to the riverbed, where it has proven difficult to retrieve.

To people like Chloe Gleichman, a young political science student at Central Michigan University, the spill took a hazy environmental sentiment and focused it. “I was always interested in the environment,” she said, “but I began to meet people affected by the spill. And then I began learning about Enbridge, and I began to see how Enbridge and climate change were all connected.”

Last year, Gleichman joined up with other students, people who had been affected by the pipeline, and local tar-sands activists and began to organize around fighting Enbridge, which had many more pipelines running through the state, most of them directly following the path of the Great Lakes.  In the way of many organizations before them, they struggled over the issue of acronyms, and finally settled on MI-CATS, or Michigan Coalition Against Tar Sands. The “cats” was deliberate: The acronym was trending among anti-tar-sands activists — and also, Gleichman says, they wanted something cute.

The group came into its own during 2013’s “Fearless Summer” — a series of loosely coordinated direct action campaigns across the country that focused on coal and tar-sands infrastructure. MI-CATS focused on an area near Stockbridge, Mich., where Enbridge was working on the expansion of Line 6B — the same line that had burst into the Kalamazoo River.

Three of the MI-CATS — Hamlin, Barb Carter, and Lisa Leggio — locked themselves down to construction equipment on July 22 with a “sleeping dragon,” a PVC-pipe and duct-tape contraption. A fourth, Chris Wahmoff, celebrated his birthday on June 24 by scooting deep into an unfinished section of 6B on his skateboard and staying there until 5 p.m., the close of the business day.

The four weren’t the only protesters arrested, but they were the only four charged with felonies. Changes in Michigan state law over the last decade had made refusing a direct order from a police officer a felony offense. Police claimed that all four had refused to act after direct orders. According to Josh Coverts, who volunteered to be Leggio’s lawyer, the law is applied broadly. He says he has one client who was charged after flinching when a police officer held his arm for a blood draw.

In keeping with the cute theme, the four became known as The Felonious Felines. The judge on Wahmoff’s case dismissed all charges, on the grounds that police couldn’t make a convincing case that they had directly and explicitly ordered him to leave the pipe.

The trial for the three other cats proved more difficult. During the trial, none of the three was allowed to mention why they had locked themselves down to construction equipment on a remote piece of land in Stockbridge, Mich. — nothing about 6B, Enbridge, the Kalamazoo River spill, or the pollution in their neighborhoods.

The jury deliberated for hours,  says Gleichman. As the deliberations stretched on to a second day, the police presence in the courtroom increased. A SWAT team appeared. Some officers wandered through the courtroom, holding pictures taken at MI-CATS protests. They appeared to be scanning the crowd for faces they recognized.

Rumors began to spread among the crowd — mostly MI-CATS and their allies — that the jury might be unable to reach a verdict, and that the prosecution and the police were working together to build a case that MI-CATS, in protesting in the area around the courthouse, had tampered with the jury.

By the time the guilty verdict was announced the afternoon of Jan. 31, the courtroom was surrounded by police officers, hands on their guns, as though they expected a riot to break out. Hamlin,  Carter, and Leggio were denied bail and taken straight from the courtroom into lockup, says Gleichman. “They’re doing well,” she reports — “as well as you can be doing in jail.” They’ll be sentenced on March 5.