I’ve been in Michigan for the last few days, researching Detroit’s water crisis. Yesterday, it became pretty obvious that my phone had figured out that we had arrived in the Mitten State: Why no, I was not aware that “energy development” contributes $15.8 billion to Michigan’s economy each year! It’s super thoughtful of you to bring this to my attention, because I often spend my Sunday mornings drinking coffee, doing the crossword, and trying to quantify the exact dollar value that a vague phrase gives to the equally slippery word “economy.”

Twitter’s pricing structure is a little mysterious, but the cost of a promoted tweet campaign like this is pretty modest — a small sum debited from a budget each time the message is retweeted or favorited. So imparting this fun fact to me and the few thousand other Michiganders scrolling through our feeds on Sunday to see if any of our friends had more fun than we did last night probably only cost Energy Citizens a few bucks. 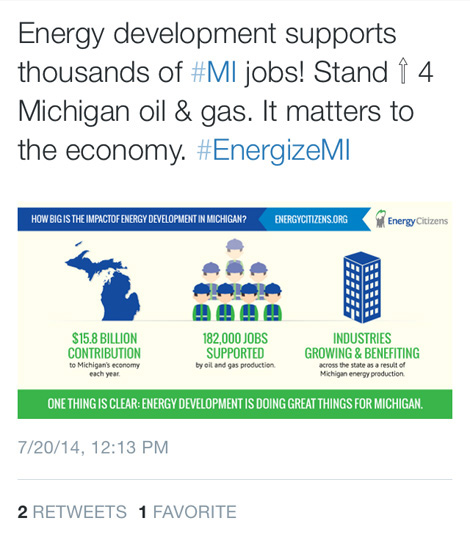 Wow. How did you know that I care so much about jobs? I mean, everyone cares about jobs, but anyone who grew up in the state of Michigan — especially anyone who lived through the year 1990 — has a Pavlovian response to the word. We know firsthand what it’s like when no one has one. It’s like you know me better than I know myself, promoted tweet! It’s like you focus-grouped my solid, self-sufficient Midwestern people, at great expense and effort.

I’m sure it comes as no surprise to the average reader that Energy Citizens is a front group backed by the American Petroleum Institute (API). The API, historically, is an organizer of opposition to any kind of legislation related to clean air or clean water. It approaches this work with such ardor that, even if it can’t marshal much actual popular support, it has simply stocked rallies with its own employees.

Why is the API so interested in Michigan? Well, the state has oil and gas reserves that people have been trying to figure out how to get out of the ground for years. This has been complicated by the fact that the state is also home to the largest aboveground freshwater system on earth, which Michiganders are so proud of you would think they glaciated the Great Lakes basin themselves or something.

In the last few years, Michigan’s state government has come up with some pretty pro-drilling legislation, like the state law passed three years ago that makes it nearly impossible for local municipalities to put limits on drilling for oil and gas the way that towns in New York have done.

The upcoming election could change that. People have already noticed a lot of out-of-state money pouring into the state Senate race. I suspect that a promoted tweet campaign like this is just a drop in the bucket compared to what Energy Citizens (and the API) are going to be laying on Michigan in the next few months.