Rex Tillerson runs Exxon Mobil, historically the world’s most profitable company, which raked in a cool $16 billion last year. On Wednesday, he found himself sitting across from Sister Patricia Daly, a Brooklyn-born Dominican nun from Caldwell, N.J., and member of a coalition that manages more than $100 billion in assets — including a stake in the oil and gas company. Between the two of them, there was a whole lot of money on the table.

“Decades have been lost in the fight against climate change, due in part to our company’s campaign of disinformation,” Daly said, as she presented a statement at Exxon’s shareholder meeting in Dallas, Texas, this week. Daly, along with the Interfaith Center on Corporate Responsibility, was there to propose a resolution that Exxon acknowledge its “moral imperative” and address climate change. The resolution demands that Exxon adopt business policies consistent with limiting average global warming to under 2 degrees C.

The company, Daly explained, owes it to their investors to do this.

“We’ve been clear from the beginning that we were taking the issue on because the poorest people on the planet were experiencing the greatest impact,” she said. “And they’re also the people who had very little to contribute to climate change.”

This campaign comes at a time of energetic engagement on the part of religious groups in climate action, perhaps epitomized by the release of Pope Francis’ encyclical Laudato Si last year. The document railed against obstructionism of climate solutions which “can range from denial of the problem to indifference, nonchalant resignation, or blind confidence in technical solutions.” That text, coupled with the promises of the Paris agreement, spurred Daly and her coalition to act. 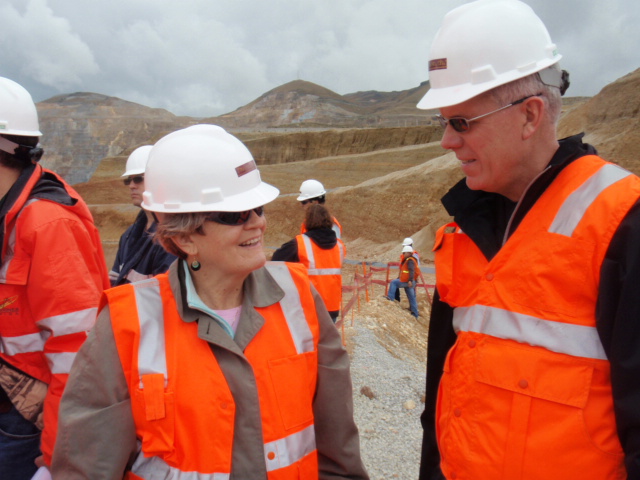 Sister Daly at the Numont Mine in Peru.Interfaith Center on Corporate Responsibility

But it wasn’t enough to force Exxon Mobil’s hand. At the end of Daly’s speech, Tillerson recommended that the company’s board vote against her resolution — and they did just that, earning only 18.5 percent of votes in favor.

“We have a pool in my office, and I was the most optimistic one,” she told Grist, explaining that the support for her resolution was nevertheless much higher than she expected. Out of nine climate-related resolutions proposed on Wednesday, just one passed: A shareholder resolution calling for more investor input on board nominations, which could pave the way for more climate-concerned board members in the future.

The phrase “moral imperative” may be new in the world of oil and multi-billion-dollar stocks. Daly, who is also executive director of the Tri-State Coalition for Responsible Investment, acknowledges that requiring it “is a little weird” for the companies. “But we’re born into this planet and we should be upstanding people,” she said.

As Daly explains, if Exxon were to accept this imperative, it would need to adjust both its energy outlook and its business plan, and come forward with a new plan that would be truthful in a way that Daly says the company has never been before.

“They weren’t truthful, they didn’t tell the truth,” Daly says, referring to recent evidence that Exxon’s climate scientists and leadership knew about the relationship between fossil fuels and climate change as early as the 1960s. “They never offered that.”

Daly’s campaigns for corporate responsibility, including against the likes of General Electric and Ford, has earned her some hate mail over the years from proponents of the fossil fuel industry. But it’s worth it, she says, because each company she goes up against is another skirmish in the battle for climate justice. That’s Daly’s moral imperative.

We can build this future