In the wake of news that China and the U.S. have struck a deal behind closed doors to limit greenhouse gas emissions, the world’s third largest emitter, India, is asking itself where it stands on the issue of emission caps, and whether it should be ready with a commitment for the U.N. climate conference in Paris in late 2015.

In past conversations about an international plan to tackle climate change, India often got lumped in with China. It has a similarly large, billion-plus population and a similarly growing appetite for fossil fuels. In the past, the two countries have together resisted emissions caps. So for India especially, China’s new commitment to peak its emissions by 2030 is a game changer.

Now that China has changed course, Indian policymakers are expected to try and distance their country from China in these discussions about carbon emissions. India still pollutes far less than China on the whole, the argument goes, and far less than countries like the U.S. and Australia per capita. At the same time, roughly a third of the country’s 1.2 billion people lack electricity, and the country’s carbon budget needs room to allow them to get it. An editorial in The Times of India argues today:

For [the] agreement to be implemented it is imperative that the US takes the lead in climate change mitigation. That’s not only because the US is among the highest per capita as well as historical emitters, but also because, more than any other country, it has the resources and innovative capacity to develop green technology. That said, the US-China deal also puts pressure on India to commit to emission caps of its own. India should accept the challenge while also decoupling itself from China.

Given that India’s share of global carbon emissions last year was only 7% compared to China’s 28% and the US’s 14%, and that India is the lowest per capita emitter among major economies, New Delhi has a strong case for pitching for different standards.

India’s official thinking on climate change is a policy advanced by Manmohan Singh, who served as the country’s prime minister until earlier this year. Back in 2007, he declared at a G-20 summit in Germany that India’s per capita emissions will never exceed the average per capita emissions for developed countries. Right now, that affords India quite a bit of elbow room. If the U.S. and the European Union pull off the cuts they’re talking about, India would have a bit less leeway, though some in the Indian government believe that even then the country could continue increasing its emissions for 15 or 20 years beyond the 2030 cap China’s agreed to, and still be below the developed world’s per capita average. 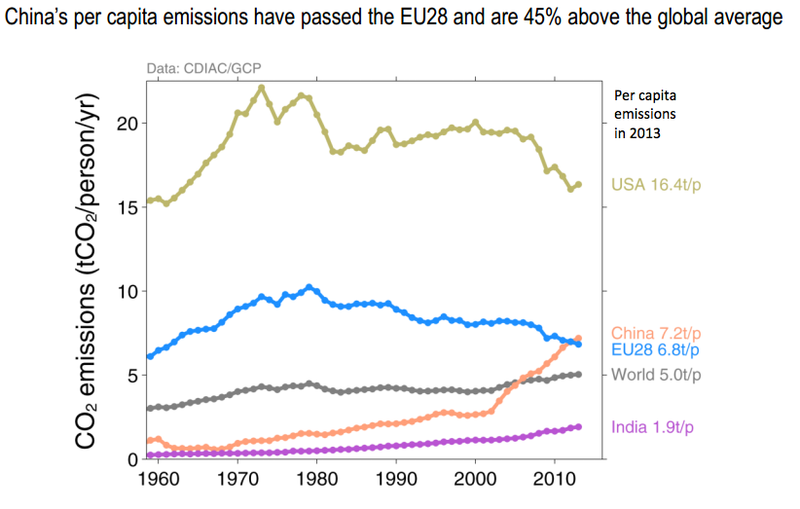 So emissions cuts, at the moment, don’t seem to be a policy priority for India. Here’s new Prime Minister Narendra Modi’s environmental minister, Prakash Javadekar, in an interview with The New York Times immediately after the September U.N. Climate Summit in New York:

“What cuts?” Mr. Javadekar said. “That’s for more developed countries. The moral principle of historic responsibility cannot be washed away.” Mr. Javadekar was referring to an argument frequently made by developing economies — that developed economies, chiefly the United States, which spent the last century building their economies while pumping warming emissions into the atmosphere — bear the greatest responsibility for cutting pollution.

Mr. Javadekar said that government agencies in New Delhi were preparing plans for India’s domestic actions on climate change, but he said they would lead only to a lower rate of increase in carbon emissions. It would be at least 30 years, he said, before India would likely see a downturn.

But there are also signs that India is looking for another path forward. Though the country’s coal use is increasing, it aims to double the amount of energy it gets from renewables by 2020. The new prime minister has shown a predilection for sustainable energy, particularly solar. Earlier this month, he reconstituted an almost-defunct panel tasked with guiding how the country deals with climate change adaptation and mitigation. On that panel is Rajendra K. Pachauri, head of the Intergovernmental Panel on Climate Change (IPCC), which recently advised that tackling poverty and tackling climate change are not mutually exclusive — in fact, it is difficult to do the former without doing the latter.

And the Modi administration has dropped hints that its position going into the U.N. Lima climate conference in a few weeks has not yet been finalized. “We are consulting experts, former negotiators, and civil society organisations in order to craft our position in Lima,” one government source told India’s Economic Times. So there may yet be room for cautious optimism that the third-biggest polluter will soon step forward with its own timeline for peaking and reducing emissions.

And if it doesn’t? A recent U.N. report modeled a way in which the world could avoid 2 degrees Celsius of warming while India’s emissions continue to grow as it hooks its impoverished people up to the grid. But for that to happen, China would have to stick to its commitment to let emissions peak at 2030, and the wealthier major polluters — the U.S., the E.U., Japan, and Russia — would have to take big steps to shift their sources of energy. Don’t bet on all that happening on schedule.

Regardless, the U.S.-China deal unexpectedly thrust India into the hot seat. Now, whether India likes it or not, the world will be watching closely — first, at the G-20 meeting in Brisbane this week, then at Lima next month and in the run-up to Paris next year — to see what steps it might take to turn down the temperature.