Obama blows a chance to crack down on coal 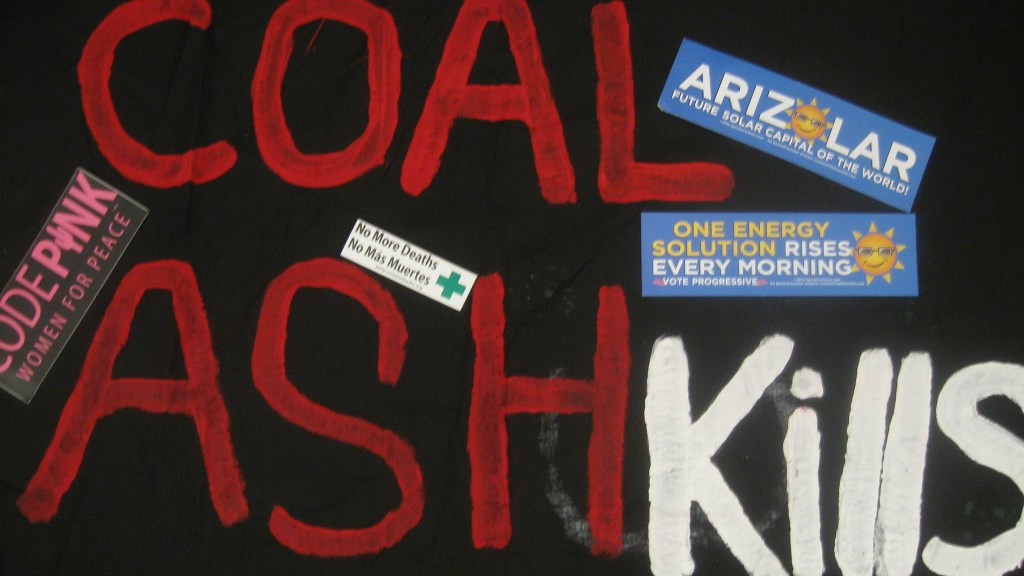 Obama blows a chance to crack down on coal

On Friday, the Obama administration quietly passed up an opportunity to make the coal industry clean up its act.

The EPA issued a final rule on the disposal of coal ash, a byproduct of coal burning that contains toxic heavy metals such as arsenic, lead, and selenium. Up until now, disposal of coal ash hasn’t been regulated by the federal government at all. Now it will be regulated, but not very strongly.

“Your banana peel that you throw away has stronger protections when it winds up in a dump than coal ash does,” says Mary Anne Hitt, director of the Sierra Club’s Beyond Coal campaign, who is highly critical of the new rule.

More than 100 million tons of coal ash are produced annually in the U.S., and much of it is simply dumped into open pits. In recent years, there have been large coal-ash spills into rivers in Tennessee and North Carolina.

Groups like the Sierra Club and Natural Resources Defense Council wanted EPA to declare coal ash “hazardous waste” and thereby subject it to more stringent federal regulation. Pesticides, for example, are in that category and so they must be disposed of “in a way that prevents releases … to the environment.” That means in a leakproof container meeting various requirements.

Coal ash will instead be categorized as “solid waste,” also known as garbage, and its disposal will be held to a lower standard. The rule does include requirements about where and how coal ash is stored that are intended to prevent leaching into groundwater. It has to be placed “above the uppermost aquifer,” and protected with a geomembrane and a two-foot layer of compacted soil. But environmentalists say that’s not strong enough. Also, old coal-ash dumps won’t have to be cleaned up or improved unless problems are discovered. And the EPA’s new rules won’t even be enforced by the federal government; enforcement will be left to the states.

Greens are disappointed. “We believe [coal ash] meets all the qualifications of being hazardous,” says Hitt. “It’s tied to cancer among other problems.”

NRDC legislative director Scott Slesinger issued a statement saying, “The EPA is bowing to coal-fired utilities’ interests and putting the public at great risk by treating toxic coal ash as simple garbage instead of the hazardous waste that it is.”

While most of enviros’ complaints focus on the risk to water, air, and surrounding communities, this decision also has bad implications for climate change.

Coal-burning power plants are the biggest source of U.S. greenhouse gas emissions, and the coal industry’s ability to belch CO2 and conventional pollutants without paying for the damage they cause has made coal power cheaper than renewables.

President Obama is said by his fans to be doing everything he can to address greenhouse gas emissions. With Republicans in Congress blocking legislative action, Obama has supposedly put coal in a vise with the EPA’s new regulations on mercury and forthcoming regulations on CO2 emissions from power plants. The centerpiece of Obama’s Climate Action Plan is using his authority under existing laws to limit power-plant pollution or make coal uneconomical by requiring the industry to pay for cleaning up after itself.

But here Obama has passed up a prime opportunity to raise the cost of using coal. Indeed, industry’s complaints about earlier, stronger proposals from the EPA were that they would hobble the coal industry. Exactly — and that would have been a good thing.

“One of the reasons that coal has been such a fixture in our electric sector is they have huge loopholes that they don’t have to deal with pollution the way other sectors of the economy do,” says Hitt. “This is another one of the egregious loopholes that the industry has secured for itself.”

And make no mistake, this weak rule comes from the White House, not apolitical bureaucrats at EPA. As a ProPublica investigation in July demonstrated, the Office of Information and Regulatory Affairs, which is part of the White House Office of Management and Budget, used its review of the proposed regulation to weaken it. From the story:

The EPA sent OIRA its proposed new rules in January 2013. The agency submitted five options from which it would choose the final rule. In its draft, the EPA indicated it would likely pick one of two options, which it listed as “preferred.” Both set relatively tough standards on power companies.

In the weeks leading to OIRA’s completed review of the coal ash limits, a number of utility industry lobbyists and lawyers met with the office. While OIRA makes public a list of attendees and documents given to the office’s representatives at meetings, it does not disclose the substance of their discussions. …

When the rule on coal ash effluent emerged from OIRA, three more options had been added, a diluting of the two options the EPA favored. OIRA’s draft dropped the tougher of EPA’s preferred rules and identified those new, less demanding options as favored.

The office also recast the EPA’s scientific findings. The agency initially stated that using ponds for storing the most toxic form of coal ash, the emissions captured in the smoke stack’s final filter, did “not represent the best available technology for controlling pollutants in almost all circumstances.” Revisions made during OIRA review recommended eliminating this conclusion, giving no explanation why.

Why do the coal and utility industries have such influence in a Democratic administration? What was Obama afraid would happen if he cracked down on them? That he’d be accused of fighting a “war on coal”? That his approval ratings would tank in coal country? That Democrats would lose Senate races in Kentucky and West Virginia? What, exactly, did he have to lose?

Obama has rewarded his enemies, screwed over his friends, and blown one of his precious few chances to help move us to a clean energy future.