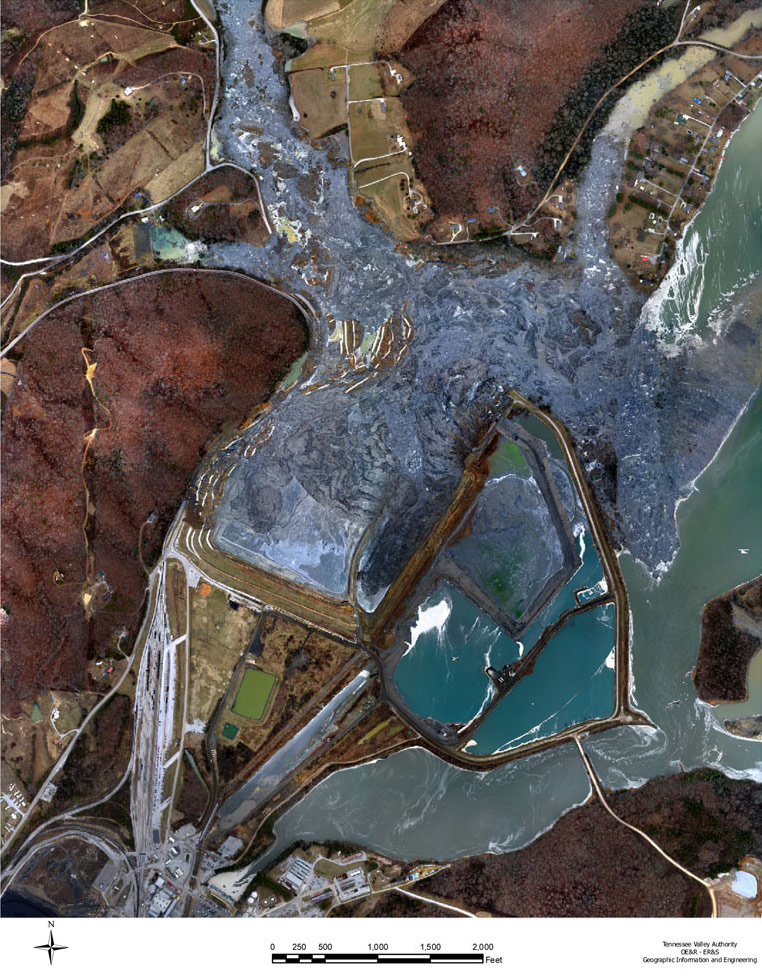 It was one year ago today that a 60-foot-tall dam broke at a holding pond at the Tennessee Valley Authority’s Kingston power plant in Roane County, Tenn., dumping more than a billion gallons of toxic coal ash onto a nearby community and into the Clinch and Emory rivers.

The largest industrial waste spill in U.S. history, the ash slide covered more than half a square mile, damaging 42 residential properties, knocking one home completely off its foundation and rendering three others uninhabitable. It dumped some 2.66 million pounds of 10 toxic pollutants including arsenic, lead, and mercury into the nearby rivers — more than all the surface-water discharges from all U.S. power plants in 2007, according to a recent analysis. The pollutants in coal ash have been linked to health problems including cancer, liver damage and nervous-system disorders.

The disaster pushed the obscure issue of coal ash waste disposal into the national spotlight and spurred the Tennessee Valley Authority and federal regulators to promise swift action to prevent anything like it from occurring again.

But on the first anniversary of the TVA coal ash disaster, those promises have been broken.

Shortly after the incident, at a public meeting held in the Roane County community of Harriman, Tenn., TVA President and CEO Tom Kilgore told affected residents that the utility would make them whole again and clean up the waste in six to eight weeks. But today, the Emory River remains closed to public traffic near the spill, ponds in the area are still clogged with several feet of coal ash, and dust from the ash is a chronic problem for local residents, some of whom complain of related health problems including coughing, nosebleeds, and headaches.

While TVA has bought out some property owners, other affected residents say moving isn’t possible because the utility isn’t offering them fair compensation for their property, or because it doesn’t consider them to be close enough to qualify for a buyout.

“Residents here have letters from pulmonologists, cardiologists, and family doctors stating that they need to move or be relocated until the cleanup is complete,” says Randy Ellis, a Swan Pond resident and a member of the Roane County Long Term Recovery Committee. “Their concerns and health are being totally ignored by the TVA.”

But coal ash is not a hazard only for the people living near TVA’s Kingston plant: The U.S. Environmental Protection Agency has documented 584 coal ash waste disposal sites across the United States and classifies 49 of those as high-hazard, meaning that a breach in their impoundments could kill people.

At the same time, an unknown number of those sites are leaking contaminants into the environment — a disaster less dramatic than what happened at Kingston but still dangerous to human health. Most coal ash surface impoundments in the U.S. are still unlined and thus pose the very real risk of water contamination. In fact, coal ash disposal sites have already poisoned surface or groundwater supplies in at least 23 states, while all 13 of those operated by the two major utilities in North Carolina are leaking contaminants to groundwater.

EPA Administrator Lisa Jackson promised that the EPA would release a proposed regulation of coal ash by the end of this year. But last week, EPA announced that it was delaying the rule’s release “due to the complexity of the analysis.” Meanwhile, TVA has said it intends to convert all its existing wet coal ash storage ponds to somewhat less hazardous dry storage — but it’s waiting for the EPA’s proposal before making any firm plans.

So on the first anniversary of the Kingston disaster, coal ash remains unregulated by the federal government — and thus Americans remain at serious risk from its hazards.

It was in the early morning hours of Dec. 22, 2008 when the dam constructed of coal ash gave way at TVA’s Kingston plant. Shortly before 1 a.m., calls began pouring into the local 911 operator about a “mud slide.” One caller panicked because she couldn’t reach her father — who as it turned out was trapped inside his house by the ash.

More than 22 residences were evacuated, but no one was hurt or killed by the dam’s collapse. Had the the incident occurred on a sunny summer day when people were outside in their yards or on the river, things could have turned out much differently.

The morning after the dam’s breach, the sun rose to reveal a shocking sight: a once-scenic riverside community covered in gray coal ash six feet deep in some spots. TVA’s Kilgore himself likened the appearance of the ruined land to a “moonscape.”

As it turned out, TVA had already known there were serious problems with the integrity of its Kingston ash impoundment. Local residents reported earlier leaks in the dam going back as far as 2001, and the utility itself later acknowledged there were leaks in 2003 and 2006. But the company obviously failed to take adequate action to guard against collapse.

And in the disaster’s wake, TVA continued to behave in ways that deepened distrust in the local community and wider public.

For example, the company released inaccurate information about the incident, as confirmed by an audit released in June by the agency’s Inspector General. TVA’s documented inaccuracies included dramatically underestimating the amount of ash spilled, claiming incorrectly that no dead fish were found downstream of the disaster, and describing coal ash as consisting primarily of “inert material not harmful to the environment,” the audit found. Scientists have documented serious potential health effects from coal ash.

The utility also misled the public about the radiation threat from the ash, likening the material to table salt when in fact researchers found significant levels of cancer-causing radioactive elements.

In addition, the Inspector General found that TVA had failed to communicate policies and decisions to victims of the spill in a timely manner. In a recent report to the community [pdf], TVA said it’s “learned a lot” over the past year including the “importance of listening” — but some spill victims remain unhappy with the way the utility is dealing with them.

During a press conference held last weekend in Harriman, Tenn., residents of the Swan Pond Road community spoke out about their ongoing problems with TVA. Some neighbors have asked the utility to buy their homes but say it’s offered them less than what their properties were worth before the spill. Others say TVA has refused to negotiate with them and in some cases cut off communications entirely.

They’re also upset over an incident back in September in which the utility — with permission from Tennessee’s Department of Environmental Conservation — conducted an unannounced test burn of a high-sulfur coal at the Kingston plant, which resulted in mysterious white fallout snowing down on their community. The pollution reportedly damaged automobile finishes and gardens, yet Kingston plant officials told local residents they didn’t know whether it was hazardous.

Environmental advocates have been critical of TVA’s behavior since the disaster as well. Activists with United Mountain Defense experienced harassment by TVA’s police force while working with local residents. And Upper Watauga Riverkeeper Donna Lisenby of Appalachian Voices reports that in her river trips near the disaster site she found TVA’s automated water sampler almost a mile downstream from where the ash cleanup operations are underway — a distance she believes is probably too far to measure any re-contamination that might be occurring as a result of the dredging. UMD and Appalachian Voices are among the 15 groups that recently wrote to President Obama asking that TVA be held accountable for its violations.

“They want our trust,” said Kingston neighbor Rick Cantrell. “They’re not going to get any. They’ve shut the residents out. They won’t talk to us, and we just can’t trust them.”

A promise the President must keep

At her Jan. 14, 2009 confirmation hearing to head the EPA under President Obama, Lisa Jackson promised to immediately assess coal ash disposal sites and to consider ways to regulate the ash — something the agency recommended in 2000 but declined to do under the Bush administration.

“The EPA currently has, and has in the past, assessed its regulatory options, and I think it is time to re-ask those questions,” Jackson said at the hearing.

U.S. power plants produce over 130 million tons of coal ash waste each year — the nation’s second-largest waste stream after ordinary household trash. Currently subject to an uneven patchwork of state regulations, the ash is not treated as hazardous under federal law despite the clear risks it presents to human health and the environment.

After being confirmed as EPA chief, Jackson did take action on coal ash. The agency sent out information requests to more than 160 electric generation facilities and more than 60 corporate offices in an effort to gather data on coal waste surface impoundments like the one that failed at Kingston. It created a database with information on the ash dumps, and it identified the 49 high-hazard facilities using utilities’ self-reported data.

The agency also completed a study on toxins in wastewater discharges from coal ash impoundments, concluding that current guidelines should be revised because of the significant toxic releases from these facilities and the likelihood that these will increase in the future as better air pollution controls are developed and installed.

But the EPA has proven reluctant at times to share its findings with the public.

Today EPA continues to withhold certain data about more than 70 coal ash dump sites at the request of power companies, honoring their claim that it represents “confidential business information.” Among the pieces of data being withheld by companies including Duke Energy and the Southern Company are the size of the ash ponds, the date they were last inspected, and whether any problems were found. The environmental advocacy groups Earthjustice, the Environmental Integrity Project and Sierra Club filed a complaint in federal court earlier this month in an effort to get the information.

Also sparking criticism among some environmental advocates was EPA’s decision to allow the coal ash being dredged from the spill site to be sent to a landfill located in a high-poverty and largely African-American community in rural Alabama. That decision was among the topics of discussion in a recent meeting between EPA officials and environmental justice leaders concerned about the agency’s treatment of low-income communities and communities of color in the South.

Jackson promised that the EPA would release proposed regulations for coal ash by the end of this year, and reportedly is considering several different approaches. But environmentalists expressed disappointment after the agency announced last week that the regulation’s release would be delayed “for a short period.” They also raised concerns that lobbyists for coal-fired utilities have mounted a disinformation campaign designed to minimize the hazards of coal ash and make regulation seem less urgent than it is.

In the meantime, toxic coal ash continues piling up at power plants across the country. The waste also continues to be used to make various products including grout and wallboard [pdf], spread on roads for ice control, used as fill for abandoned coal mines or to prepare roadbeds. It’s even promoted as a soil amendment for food crops — all without the benefit of strict federal oversight.

The EPA said it expects to issue a proposed rule in the “near future.” Environmental advocates say they hope that means early next month.

“The Obama administration has pledged to let law and science guide its environmental decisions, not the arm twisting of industry lobbyists,” according to a statement from Earthjustice, the Environmental Integrity Project, Natural Resources Defense Council and Sierra Club. “That is a promise President Obama must keep.”