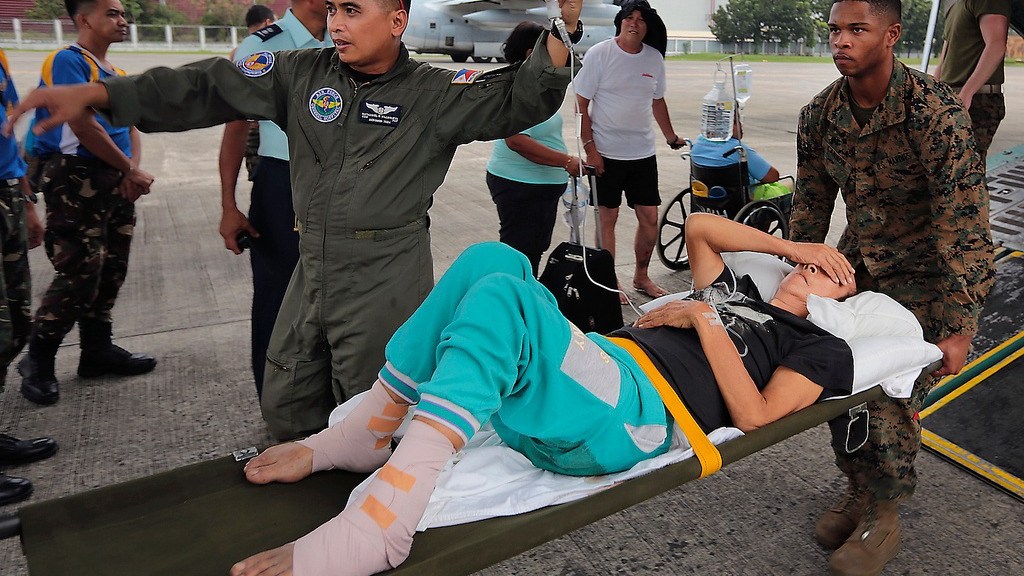 A difficult recovery effort, hampered by security threats, bottlenecks, and an almost complete lack of communications, is still in its infancy in the Philippines four days after a powerful typhoon plowed through the country.

Super Typhoon Haiyan — also known locally as Yolanda — made landfall several times on Friday, leaving in its wake up to 10,000 casualties (a figure that comes from local officials on the island of Leyte and reported by the Associated Press; the official Philippine government count is much lower). The Joint Typhoon Warning Center data reported sustained winds approached 195 miles per hour three hours before landfall, with gusts of up to 235 miles per hour. Stunningly scary footage captured by a CCTV/Weather Channel team during Haiyan’s height shows damaging storm surges ripping buildings apart, “like a tsunami.” The storm made landfall again in Vietnam on Monday morning local time.

The Philippines, a group of more than 7,100 islands, is no a stranger to tropical cyclones (this is the 24th just this year). And just as more than 9.5 million people who were in the storm’s path survey the damage and locate loved ones, the country is facing another tropical depression, Zoraida​.

“We are always between two typhoons. The farther we are from the previous one, the nearer we are to the next one,” said Amalie Obusan, a Greenpeace climate campaigner in the Philippines, by phone. “Now it seems like a very cruel joke … Every year, every super typhoon is much stronger than the previous year.”

Lynette Lim from Save the Children, an aid and development agency focused on the youngest disaster victims, survived the storm in the provincial capital Tacloban, perhaps the hardest hit city. She said the severity of Haiyan took everyone by surprise, scrambling preparation efforts, and setting the recovery back. “Most of the government officials were completely incapacitated to respond to the needs of children and their families.” Even now, four days later, Lim said, “We’re really starting from scratch.”

Lim estimates that two out of every five dead bodies she saw were children. Reached by phone in Manila, where she had returned to help coordinate her organization’s response with the benefit of cellphone reception, Lim said she saw “widespread” evidence of malnutrition amongst children already hungry just days after the storm: “It’s just quite a heartbreaking sight. Going without food for this many days could be fatal for them.”

One of the most pressing concerns facing the recovery effort, said Lim, is installing proper management of camps for survivors. In Tacloban’s main sports arena, known as the Astrodome, which she said was housing an estimated 15,000 people, “the conditions are terrible because people are throwing their trash everywhere, and children are openly defecating because there are no portable toilets.”

But relief resources cannot start flowing reliably until basics are met, and that’s going to take time: “Clearing the roads, there is no power, there is no water,” she said. “It’s really tough conditions for aid workers as well as for the survivors.”

“It’s a nightmare really,” said Ian Wishart, CEO of Plan International Australia, who was en route to Leyte when we spoke via cellphone. “There are so many blockages, and the airport is at capacity … It’s a real challenge to get the aid workers in.” Wishart himself is hoping for a local flight from Cebu, a neighboring province, or a boat.

Wishart, who still can’t account for all his own aid workers that were in the Philippines when the storm struck, said the world has yet to glimpse the real extent of the damage, and more and more tales of destruction will come out as relief teams reach devastated coastal communities in remote parts of the country. “It’s a day-by-day thing, a real emotional roller coaster. Until you know, it’s very disconcerting,” he said.

Wishart said the recovery will take two to three years. “We desperately need support,” he said. “This is right up there alongside the 2004 tsunami response … in global terms, this is a very big disaster.”

Emman Hizon, deputy secretary general of Akbayan, a socialist political party represented in the Philippine congress, is calling on the government to ease bottlenecks in the relief effort. By phone, Hizon said the party had hundreds of volunteers, mainly corralled to help with medical needs, waiting for clearance to provide assistance in Leyte province, but they are being held up by security concerns. “Unfortunately, we’re still on standby awaiting for the government signal to tell us it’s okay to fly in volunteers.”

Looting is widespread. A Red Cross convoy full of supplies that could have helped 25,000 families was attacked in Leyte, according to Richard Gordon, from the Philippine Red Cross. “There really is a breakdown of law and order,” Hizon said.

Wishart said police have now been moved in, and there are regular check points and curfews set up, but he warned the complete picture will only emerge in the coming days. “These early days of a disaster are quite chaotic. And even the information I have could be hours old.”

But with every one of those hours, Hizon said, the situation is worsening. “Bodies are piling up, and funeral services are not working, because the funeral workers themselves are victims of the storm. So bodies are lined up in the streets covered with blankets.”

Amalie Obusan from Greenpeace said that while the recovery was taking place, it was also important to press world leaders to consider the climate impacts of their decisions, especially as the U.N. climate conference in Warsaw gets underway. “The waters around the western North Pacific are warmer now, and that probably had given the typhoon some energy to intensify,” she said. “And even now while we say that we cannot possibly attribute individual storms to or individual extreme weather events to climate change, the patterns that we seen in the Philippines over the last many years are quite consistent with the projections for this region.”

“It is real,” she said. “Seven out of 10 Filipinos said they’ve already experienced climate change … for Filipinos, and Southeast Asians in general, there is recognition that climate change is here.”