The following story was reported by Isaiah Thompson of the New England Center for Investigative Reporting and published here in collaboration with Grist. NECIR trains the next generation of journalists in investigative reporting with summer high school workshops in Boston. Click here to learn more and apply today.

Despite the terrible derailment of an Amtrak train last week and a spate of other fiery accidents involving trains carrying flammable crude oil — five so far this year — railroad industry and government officials have taken pains to reassure the public of rail transportation safety.

2014 was “the safest year on record for the railroad industry,” the Association of American Railroads has boasted in web “advertorials” and statements to news organizations.

But it’s a claim that, under scrutiny, doesn’t completely hold up to the numbers.

A review of federal reports and railroad safety data by the New England Center for Investigative Reporting suggests that while rail is much safer than it was in recent decades, at least some indicators of safety have gotten worse, not better, over the past few years:

And derailments are expected to more than double over the next few years, according to projections buried in government reports from the same agencies that are issuing new safety rules.

NECIR’s findings come amid a media relations push by the railroad industry. It’s responding to increased concerns over recent accidents as well as the federal Department of Transportation’s release of new rules this month regulating the tank cars carrying crude, ethanol, and other flammable liquids. Those tank cars, so-called DOT-111s, have been known for decades to be prone to puncturing, and have been involved in at least 17 serious accidents and explosions since 2013, including the July 2013 derailment of a train carrying crude that killed 47 people in Lac-Mégantic, Quebec.

Experts on the railroad industry asked to comment on NECIR’s findings said they weren’t surprised that the number of hazardous releases, fires, and major accidents is rising, but cautioned that those findings don’t mean the rate of such incidents has increased.

Flammable liquids traffic “has increased from nominal numbers to significant numbers in just two years,” says Allan Zarembski, a research professor and director of the University of Delaware’s Railroad Engineering and Safety Program. “If you increase traffic, even if the safety rates are going down, the number of accidents might go up.”

That seems to be the case now: While accident rates might not be increasing, the sudden rise in the transport of crude oil and ethanol — from 30,000 carloads in 2004 to 800,000 in 2014, thanks in large part to an oil boom in the Bakken Shale region of North Dakota — has also led to a rise in the number of fires, hazardous releases, and major derailments involving those substances. That traffic is only expected to increase in coming years.

Fires and hazardous releases are increasing

Railroad safety in general has, indeed, steadily gotten better over the past few decades.

But even a “safe” year means hundreds of accidents and dozens of derailments. The railroad industry’s self-declared safest year on record — 2014 — included 1,755 accidents, 1,241 derailments, 145 collisions, and dozens of fires.

Most of those accidents were small and relatively harmless. However, an NECIR analysis of data collected by the Federal Railroad Administration found that the number of more serious kinds of accidents — fires, explosions, hazardous releases, and accidents causing damage — has actually increased in recent years.

Accidents involving fire or “violent rupture” have doubled in three years. In 2011, railroads reported 23 such accidents. Last year, by contrast, saw 47 such accidents. 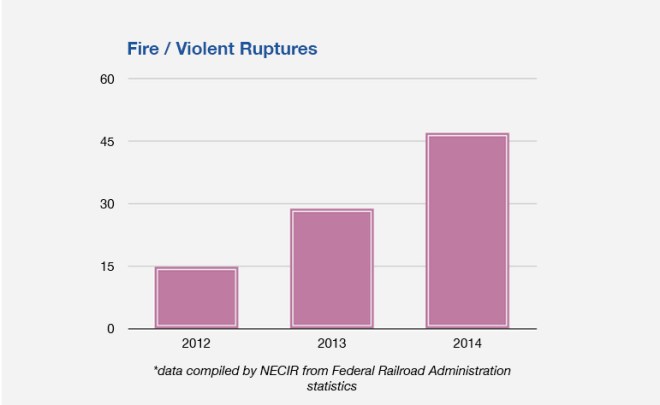 In a written statement to NECIR, American Association of Railroads spokesperson Ed Greenberg emphasized that most of these incidents were small fires that caused little damage and were quickly extinguished. He also noted that even if the number of such accidents is rising, that’s because of increased traffic of crude — the rates themselves are not rising.

Even so, more accidents are more accidents, and Greenberg said the AAR had called for stricter “thermal protection” for tank cars — manufactured and usually supplied by the rail shipping industry — than the federal government itself has asked for.

Accidents involving hazardous materials releases — which includes everything from a leak the size of a teaspoon to a major spill — have increased two years in a row. Whereas 2012 represented one of the lowest years for hazardous releases since 2006, the number of such incidents had begun to climb again by 2014, rising by about 8 percent to 714 compared with two years prior.

Greenberg noted that hazmat incidents rose as a result of increased traffic of hazardous materials in general, and that the number of hazmat incidents in 2014 was still lower than in most years prior.

Major accidents are on the rise, expected to keep rising

Most of the accidents, derailments, and hazardous materials releases that occur in a given year are relatively small incidents. But the number of major accidents, those involving big fires or spills, is also on the rise — and, according to the U.S. Department of Transportation’s own analysis, expected to continue to grow.

An NECIR count of incidents of major spills and fires shows a stark increase in such incidents, like the April 30, 2014, derailment of a train in Lynchburg, Va., that spilled 300,000 gallons of crude into the James River, or the Feb. 16, 2015, derailment of a crude train in West Virginia that resulted in 19 cars catching fire.

In 2013, by contrast, there were six major accidents in North America, including the Lac-Mégantic disaster, all involving crude. In 2014, there were five major accidents involving crude. And so far this year, there have been five accidents involving major derailments of trains carrying flammable liquids that resulted in fires. That category doesn’t include the Amtrak disaster — but Pennsylvania Gov. Tom Wolf (D), who recently hired a special consultant to look into the dangers of crude-by-rail in Pennsylvania, noted that the Amtrak derailment happened near parked oil train tankers, saying that was “an additional cause of concern.”

What’s more, buried 300 pages into an “impact analysis” of the new rules as proposed by the Department of Transportation is a table showing “Predicted Crude and Ethanol Derailments,” which foresees derailments more than doubling in the next five years. 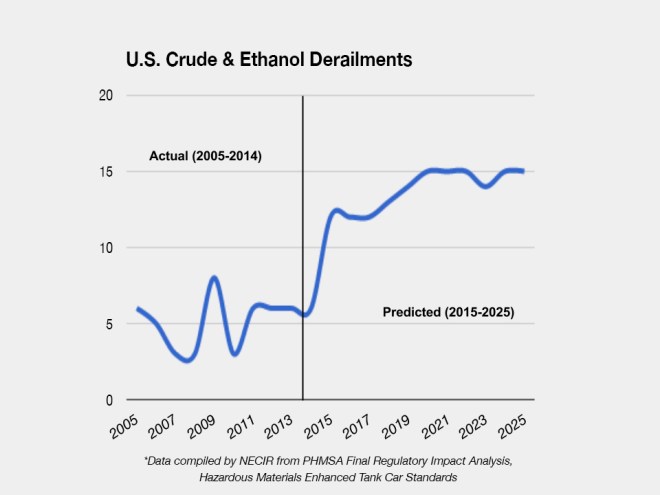 The one thing that everyone agrees on is the fact that more traffic of flammable liquids will inevitably result in more accidents involving them. And that’s where the new federal regulations governing tank cars come in.

The rules should make tank cars less prone in accidents. But they also allow the older, less-safe tank cars to remain in service for years to come.

Last week, a coalition of environmental groups, including Earthjustice, the Sierra Club, and the Waterkeeper Alliance, filed a challenge against the Department of Transportation’s new rules in a federal appeals court.

“It doesn’t make sense for an agency to admit that there are sub-standard cars and then let them remain on the rails for up to 10 years,” says Kristen Boyles, an attorney for Earthjustice. “We don’t do that when we regulate other products.”

Isaiah Thompson is a reporter at the New England Center for Investigative Reporting, an independent, nonprofit news center based at Boston University and WGBH News. Read more of his reporting on crude and ethanol trains here. Isaiah can be reached at isaiah_thompson@wgbh.org and on Twitter at @isaiah_thompson.