Rich countries: Sure, climate change will screw poor countries, but what about us? 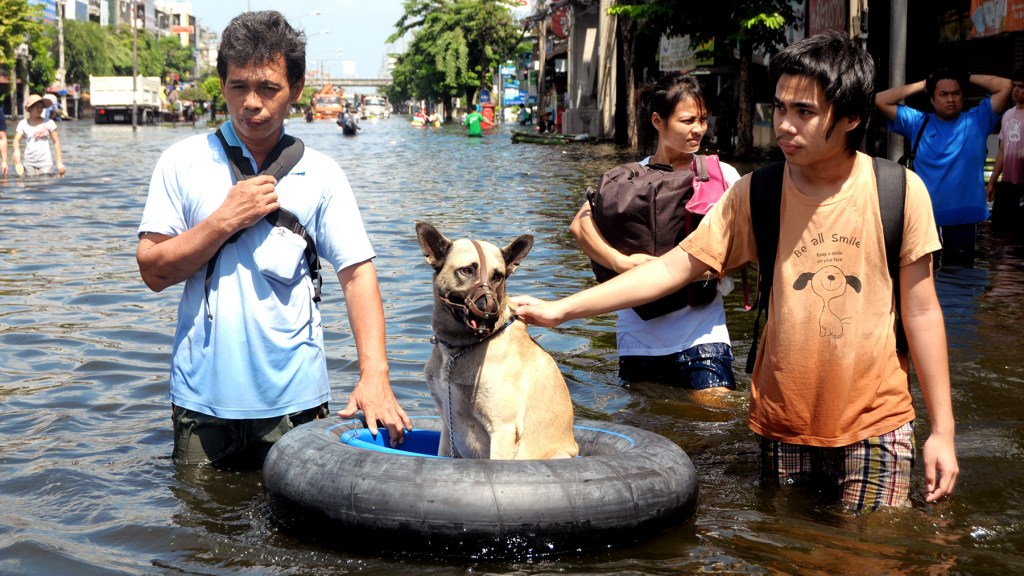 Citizens rescue a dog from the flood of November 2, 2011 in Bangkok, Thailand. achiaos
Climate & Energy

Rich countries: Sure, climate change will screw poor countries, but what about us?

The new report from the U.N. Intergovernmental Panel on Climate Change highlights that we are already feeling the pain of global warming across the planet. Heat waves and drought are increasingly in rhythm in every major continent, including our own, while severe flooding is more frequently becoming the business in Africa. If you don’t want to read the IPCC’s 2,500-plus page report, here’s the shorter version: Climate fuckery is not futuristic; we have been fucking up the atmosphere; it is fucking us back.

But, as I wrote recently, there are certain people — particularly those with large concentrations of melanin in their skin, and smaller concentrations of money in the bank — who are suffering more of that fuckery than their less-melanated, more-resourced counterparts.

The IPCC’s latest makes note of this. Disturbingly, the report’s authors wanted to keep this critical information out of the much-shorter IPCC executive summary — the part that’s supposed to be the most accessible to the public and lawmakers.

The poorest people in the world, who have had virtually nothing to do with causing global warming, will be high on the list of victims as climatic disruptions intensify, the report said. It cited a World Bank estimate that poor countries need as much as $100 billion a year to try to offset the effects of climate change; they are now getting, at best, a few billion dollars a year in such aid from rich countries.

The $100 billion figure, though included in the 2,500-page main report, was removed from a 48-page executive summary to be read by the world’s top political leaders. It was among the most significant changes made as the summary underwent final review during a days long editing session in Yokohama.

The edit came after several rich countries, including the United States, raised questions about the language, according to several people who were in the room at the time but did not wish to be identified because the negotiations are private.

The language is contentious because poor countries are expected to renew their demand for aid this September in New York at a summit meeting of world leaders, who will attempt to make headway on a new treaty to limit greenhouse gases.

Many rich countries argue that $100 billion a year is an unrealistic demand; it would essentially require them to double their budgets for foreign aid, at a time of economic distress at home. That argument has fed a rising sense of outrage among the leaders of poor countries, who feel their people are paying the price for decades of profligate Western consumption.

Those bolds are all mine. And before I elaborate, I have to add that it’s equally disturbing to me that this information came two-thirds of the way into Gillis’s article. Talk about burying the lede — this erasure is the story, but it was relegated to the story’s third act, meaning many people probably won’t read it.

Back to the bolds, starting with the last one: Rich countries argue that $100 billion a year to shield poor countries from climate impacts is an “unrealistic demand.” I do not believe that if the World Bank said that Europe and U.S. will be destroyed without $100 billion in aid each year, that this would have been deleted from the IPCC summary.

Arguing that they cannot afford to deal with the poor in the way that the world’s lead economists say they need to means rich countries do not truly understand what they’re up against.

It means that they believe they will somehow be immunized from the kinds of violent uprisings over food, land, energy, and water that result when the poor — mostly people of color — are left out of the picture. It means they do not get what is already happening in Syria, the Ukraine, Taiwan, Mexico, and the Sudan, where forced massive migration and civil wars have already started over limited resources, arguably the result of climate change’s impacts.

When rich countries can edit the poor out of the most important document on the gravest danger facing Earth, it means that they are not serious about addressing climate change. It means that climate mitigation funds will help protect millionaire beachfront condo owners in South Beach, but have yet to address how it will protect what’s left of Geechee families in South Carolina.

Perhaps it even means that rich countries think their money is better spent on technology and “innovation” to shield themselves from climate catastrophe. And those tricks very well might shield some people from flooding, but it doesn’t shield the “poorest” from the kind of reckless capitalism that traps them in a perpetual state of vulnerability.

This is an insult to nations who even with meager resources have already started making the difficult investments that their wealthier counterparts don’t have the courage to make.

“Bangladesh has invested $10 billion of its own money to adapt to extreme climatic events,” said Dr. Camilla Toulmin, director of the International Institute for Environment and Development in a statement on the IPCC report. “Nepal is the first country to develop adaptation plans at the community level. It is time for the richer countries to pull their weight and do the right thing, by investing at home and abroad in actions that can reduce emissions and protect people and property from danger.”

There is little today that says whiteness is supreme more than arguing that it is an “unrealistic demand” for nations with predominantly, if not exclusive, white leadership to pay what is necessary to protect the people of Africa, India, and South America from climate calamity they did not cause.

The oppression, the bigotry, and the fuckery of that argument is that it allows rich countries to continue perpetuating unrealistic demands on the world’s “poorest” — those who “virtually have had nothing to do with” climate change.

Chattel slavery was an unrealistic demand. Putting Latin American workers in the most dangerous farm and factory jobs, exposing them to pesticides, carcinogens, and other toxic elements so that Walmart can have “roll back” prices — these are unrealistic demands. Asking the poorest of communities to fend for themselves against unprecedented waves of heat, drought, and rising sea levels is an unrealistic demand.

In my estimation, there are two things that will destroy us eventually if not resolved soon: white supremacy and climate change. These happen to both be things that the wealthy believe they can afford to ignore. It’s for this reason that the IPCC’s summary just may be their infamous last words.