Even as America’s economy started to rebound from the recession between 2008 and 2013, climate change–causing power plant emissions in the majority of American states did not, according to a new study.

Earlier this year, environmentalists celebrated the news that, while the world’s economy continued to grow, CO2 emissions remained flat in 2014. This new report is the most thorough examination so far of how that trend is playing out in the U.S. The study, conducted by a team made up of sustainability groups, Bank of America, and four of America’s largest power plant operators, looked at carbon dioxide (CO2), nitrogen oxides (NOx), sulfur dioxide (SO2), and mercury emissions from the nation’s 100 largest electric power producers.

The drop in CO2 emissions (and in local pollutants as well) happened for a number of reasons, the report said, including better pollution controls at coal power plants, less demand for energy, and the growing availability of cheap alternatives to coal.

The findings present further evidence that emissions are not necessarily linked to economic growth: Over the five-year period the report looked at, 42 out of 50 states decreased their CO2 emissions from power plants, making for a nationwide decrease of 12 percent. This, sustainability advocates behind the report say, debunks arguments advanced by the fossil fuel industry and its allies in Congress that regulating climate change-causing pollutants will kill jobs. The report also found that a small number of energy companies are responsible for a disproportionate share of emissions.

“Most parts of the country are firmly on the path toward a clean energy future, but some states and utilities have a longer way to go and overall the carbon emissions curve is still not bending fast enough,” said Mindy Lubber, president of Ceres, one of the sustainability groups behind the report, in a statement. “To level the playing field for all utilities, and achieve the broader CO2 emissions cuts needed to combat climate change, we need final adoption of the Clean Power Plan.” 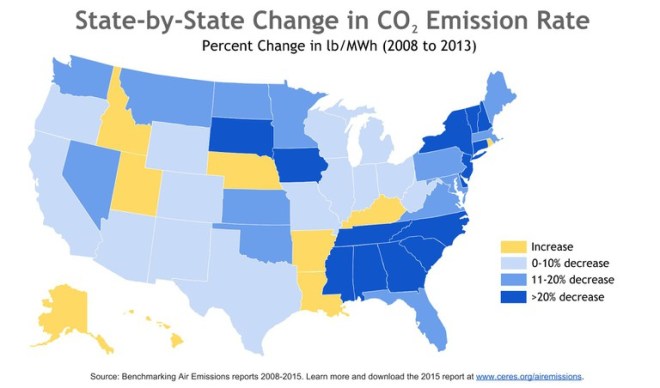 This study follows on another one, out yesterday, showing that the Northeast Regional Greenhouse Gas Initiative, a cap-and-trade scheme, cut emissions from the region’s power plants by about a third since it started up in 2009, and pumped nearly $3 billion into the regional economy over that same time period.

Obama’s critics are claiming that his Clean Power Plan, which the EPA will finalize this summer, would devastate the economy, but the evidence just keeps mounting that power plants can cut their CO2 emissions without killing jobs or slowing economic growth at all.

Ladies, sometimes it’s OK to have your burger and eat it, too