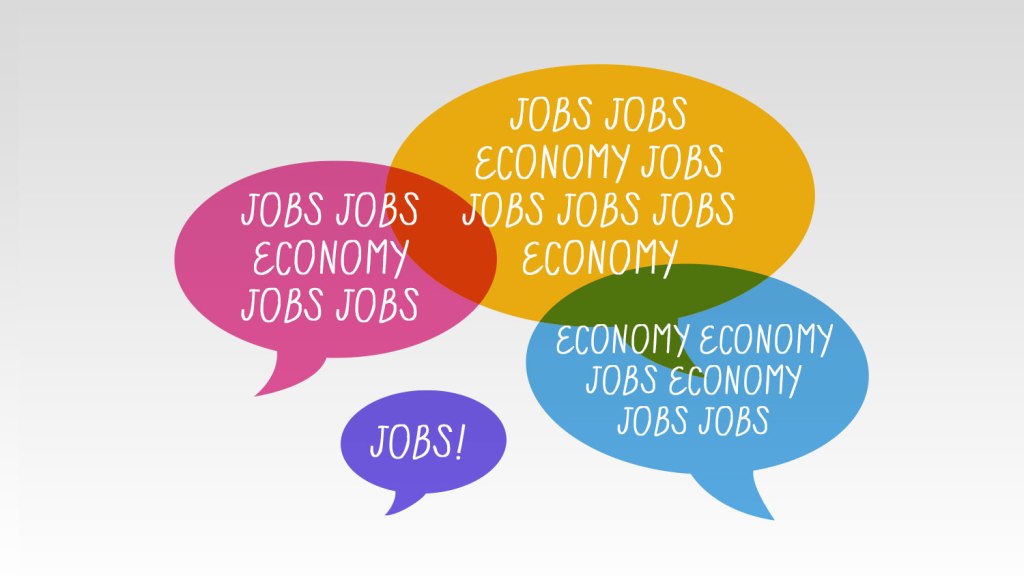 In a recent USA Today op-ed calling for a shift to clean energy, Democratic presidential hopeful Martin O’Malley starts off by talking about “the moral imperative of addressing climate change.” Then, a little further down, he writes, “Clean energy represents the biggest business and job creation opportunity we’ve seen in a hundred years,” and thereafter he presses the theme that economic growth goes hand-in-hand with fighting climate change.

O’Malley, a climate hawk, is talking up the economic angle on the campaign trail too. It will be part of his regular shpiel on the three-day climate-focused swing through Iowa he began Thursday morning, and he also hit the theme during a stop in Ames, Iowa, last Sunday: “I believe that [the climate challenge] can be a font of all sorts of job creation and renewable technology, green design, renewable energy, and you’ve seen a little glimmer of it here with the wind in your state.” He’s put together a climate policy white paper that’s full of strong, serious proposals, many of them framed as economic growth boosters: “Building retrofits out-perform investments in new gas and oil exploration as a form of job creation or economic stimulus by 3 to 1,” and “Low energy productivity costs American businesses and households $130 billion a year.”

He’s right, of course, that climate action is generally good economics. Numerous reports have found that investing in clean energy and energy efficiency produces more jobs than investing in fossil fuels. What if, though, a study finds — as one from the University of Chicago recently did — that home energy-efficiency retrofits cost more than they earn back in energy savings? The study’s authors say we should find more cost-efficient ways of reducing emissions. But if you’re treating climate action as a jobs program, and home retrofitting creates a lot of jobs, will you be inclined to ignore such recommendations from researchers about the best ways to cut emissions?

At least O’Malley — unlike Democratic frontrunner Hillary Clinton — makes climate action its own platform plank rather than just a subcategory of economic development. In her campaign announcement speech, Clinton presented combatting climate change as merely an additional benefit of a clean energy economy. The energy section of her speech was buried in the middle of a string of vague, small-bore economic-growth proposals. Shortly after saying, “We will unleash a new generation of entrepreneurs and small business owners by providing tax relief, cutting red tape, and making it easier to get a small business loan,” Clinton dished out a few sentences on energy policy:

And we will make America the clean energy superpower of the 21st century.

Using additional fees and royalties from fossil fuel extraction to protect the environment.

And ease the transition for distressed communities to a more diverse and sustainable economic future from coal country to Indian country, from small towns in the Mississippi Delta to the Rio Grande Valley to our inner cities, we have to help our fellow Americans.

Now, this will create millions of jobs and countless new businesses, and enable America to lead the global fight against climate change.

The whole section is set up as an agenda to “make America the clean energy superpower of the 21st century,” rather than to combat climate change. The former is the real purpose, the latter an afterthought. She does the same thing on her campaign website, where fighting climate change is mentioned at the bottom of a long list of steps she wants to take to strengthen the economy.

This framing — economic growth as the goal, climate action as a side effect — is exactly upside-down.

Suppose you found out tomorrow that an energy system powered by wind turbines would employ slightly fewer people than one dominated by coal-fired power plants, or would cost energy consumers a little bit more. Would that make you decide that climate change isn’t worth addressing? Of course not. That’s partly because a bigger economic analysis would factor in the devastating costs of climate change over the long run. But all that aside, people with moral scruples believe that destroying the planet and killing a bunch of living creatures on it, including humans, is bad. If the case for climate action is all about its effects on employment, then it falls apart if the economics change.

O’Malley spokesperson Haley Morris argues that this isn’t a risk because the job-growth advantages of cleaner energy are well-established. “[O’Malley] was governor overseeing a state during a recession,” says Morris. “He said, ‘We need to build up the clean energy sector,’ and he was able to do it. He was able to create thousands of clean energy jobs in Maryland.” This is true: Although still just over 3,000, the number of Marylanders employed in solar energy, for example, grew nearly 30 percent last year, which is 40 times faster than the state’s workforce overall.

The Clinton campaign declined to comment for this story.

Still, Clinton and O’Malley’s apparent strategic calculation — that appealing to economic self-interest is essential to getting voters to care about climate change — is debatable. As George Monbiot recently argued in The Guardian, environmentalists shouldn’t condescend to average voters by assuming that their reasons for forming opinions are inherently more selfish than environmentalists’ own motivations. “I have asked meetings of green-minded people to raise their hands if they became defenders of nature because they were worried about the state of their bank accounts,” Monbiot writes. “Never has one hand appeared. Yet I see the same people base their appeal to others on the argument that they will lose money if we don’t protect the natural world.”

This is the kind of mistake that Democrats often make in their approach to working-class white voters, whom they keep losing by growing margins. A series of stiff, technocratic presidential nominees — from Michael Dukakis to Al Gore to John Kerry — hoped that if they laid out some complex plans to tweak the tax code and make targeted economic investments, the elusive Joe and Jane Sixpack would do the math, see that they’d come out ahead, and vote accordingly. But it turns out that the Sixpacks care about other things, from abortion to national security, and they often vote for the candidate who they think offers moral leadership. In 2004, 80 percent of voters who cited “moral values” as the most important issue voted for George W. Bush. At the time, that was widely interpreted as evidence that socially conservative voters had come out in force for Bush and against gay marriage. In retrospect, it looks more like a lot of swing voters appreciated Bush’s ability to broadly speak in the language of moral values — for example, by reframing his disastrous invasion of Iraq, ex post facto, as a mission to bring God’s blessing of democracy to the Middle East.

Too often, when Democrats choose a presidential nominee, they pick the person they imagine swing voters will like rather than the person they themselves are moved by. Picking Kerry because he served in Vietnam epitomized this thinking. Picking Barack Obama — an inexperienced African-American with a Muslim name but also an inspiring narrative and extraordinary rhetorical talent — was the opposite.

Some environmentalists are prone to follow the same flawed logic as technocratic Democrats: trying to appeal to heads, not hearts. If enviros are moved to act against climate change by learning that it causes species to go extinct or forces an entire town of indigenous Alaskans to relocate, couldn’t other people be swayed for the same reasons?

The failure of Democrats like Kerry and Dukakis to inspire and energize with moral appeals may not be the reason they lost, but it certainly didn’t help. Clinton and O’Malley, with their dry speaking styles and penchant for wonk-speak, both risk falling into the same trap. Focusing too much of the discussion of climate policy on how to gain a few thousand jobs here or there reinforces this weakness.

O’Malley’s camp counters that the electorate is currently focused on the economy. “The governor has zeroed in on the central challenge that our country faces right now, which is an economy leaving people behind,” says Morris. “So he is putting forward a series of goals that will help rebuild the American Dream and the first one that he’s outlined is his specific goals and progressive plan on how we can address climate change.” O’Malley has some good reasons for thinking this way: Polls consistently show economic insecurity at the top of American voters’ priorities and climate change down near the bottom. Although overwhelming majorities support climate action and say developing clean energy should be prioritized over fossil fuels, most voters also support building the Keystone XL pipeline, because of the potential to create a few jobs or the misperception that it will lower the price of gasoline. If you’re going to oppose Keystone, as O’Malley does, then perhaps you need to emphasize how clean energy will create more jobs.

The Nation’s John Nichols sees O’Malley’s relentless attention on economic opportunity as itself a moral stance on “fairness and human dignity.” And Morris says O’Malley always includes both the moral and economic dimensions when discussing climate change: “He brings a moral conscience to how he talks about the challenge of climate change, the urgency that our country faces in trying to address it.”

For better or worse, there is a contrast with Bernie Sanders, another Democratic presidential contender and proven climate hawk, who highlighted the moral necessity of climate action in his campaign announcement speech and on his website, without any mention of economics — and his impassioned approach is winning lots of converts among the Democratic grassroots.

Again, O’Malley and Clinton are right that a full-bore fight against climate change could be a huge driver of job creation and economic growth — but Americans need to get used to the idea that we must undertake climate action no matter what, regardless of whether each step will save or add a few jobs in the short term.

Ultimately, climate change is a profound moral challenge — it endangers people’s homes and lives, particularly those of the world’s poor — and decisions about whether and how to address it have big moral ramifications. Will we stop letting coal, oil, and gas companies enrich themselves by extracting fossil fuels that are destroying our atmosphere? Will we ban big corporations from spewing pollution on their neighbors and emitting heat-trapping gases that lead to the flooding of impoverished people from their homes, from New Orleans to Bangladesh? Will we stand up to the mega-rich fossil fuel barons like the Koch brothers and redistribute some of their wealth to lower-income communities in the U.S. and abroad?

In 1941, when Japan attacked the United States at Pearl Harbor, the U.S. economy was still recovering from the Great Depression and unemployment stood above 9 percent. Ultimately, World War II would act as a great economic stimulus package. But in his address to Congress asking for a declaration of war, Roosevelt didn’t say, “Here is my jobs agenda: We’ll make lots of well-paying jobs at munitions factories if we go to war against fascism.” And suppose World War II hadn’t created jobs but had instead cost us a few: Would it then not have been worth fighting? Some causes, regardless of their economic impact, are worth fighting for.