In "Advantageous," society has failed women in a big way 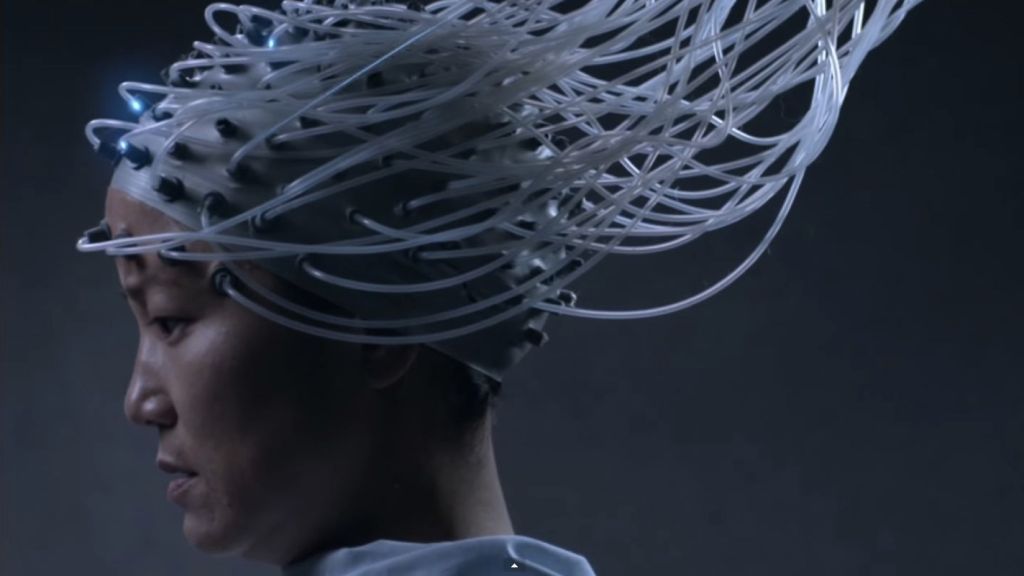 In “Advantageous,” society has failed women in a big way

Welcome back to Green Screen, where Grist writers break out their inner film buffs to talk movies, television, video games, and whatever other screen-based media strikes our fancy. This week, we discuss Advantageous, a short film turned feature length sci-fi flick, now available on Netflix.

The Basics: It’s the year 2041, the Earth is crawling with more than 10 billion people: Unemployment is at 45 percent, public schools are no more, and advances in biotech have made the pressure for women to stay young worse than ever. Oh, and women rely on men like the 20th century never happened, because society decided that it’s safer to have a bunch of unemployed women roaming around, rather than desperate, down-on-their-luck men (sorry, gentlemen, we know how much it sucks when movies belittle your entire gender).

So when single mother Gwen loses her job as spokesperson for a biotech company because she’s too old and can no longer afford the ridiculous tuition of her daughter’s private school — and young Jules’ only shot at a decent life — she opts for her own former company’s new experimental procedure and has her mind cloned in a new, younger body.

Why it’s green: The movie takes place in a semi-plausible future world where overpopulation has wreaked havoc on the fabric of society. While it’s hard not to wonder what the people of 2041 think about climate change, technology, and our ever-evolving relationship with the natural world, the beauty of Advantageous is that it doesn’t deal with any of these issues head-on. The movie is so focused on the story of Gwen and Jules that the only details we learn about this beautiful and horrifying future are incidental, and all the more evocative for it.

That subtlety is what’s so great about this movie. Instead of a two-hour epic sci-fi blockbuster that tries to explain all the social, political, and environmental issues of the near future (and fails), director and co-writer Jennifer Phang gives us just enough detail to make us want more.

We see, for example, that Gwen and Jules live in a beautiful megacity with surreal architecture — but given what we know about the jobs market, we wonder what terrible conditions lie elsewhere. We get subtle hints that humans have started to merge with machines for physical and mental augmentation, but we don’t know to what extent. We see surveillance cameras, holograms, flying vehicles (maybe drones?), and ubiquitous wearable devices in the place of smartphones. We observe the occasional explosion near the top of a skyscraper and are never told why.

All of this could easily signal your run-of-the-mill dystopia, except that there’s a certain calm and beauty to this world, too. For one thing, it seems like the promise of ubiquitous computing has somewhat come to fruition by 2041. That is, technology has faded into the background, becoming a pervasive yet passive part of life, rather than a source of disruption like screens at the dinner table or selfie sticks.

People 26 years from now seem to have a healthy appreciation for nature, too. (And hey! There’s some nature left!) Before going to her new school, Jules attends a tech-free summer camp with her classmates (digital detox, anyone?). Unfortunately, it seems that the point of the camp is mostly to give girls an opportunity to meet boys, because, you know, they’re gonna need ‘em one day when they’re all old and ugly.

Which brings us to the whole “aging women are gross thing.” The obsession with youth in this movie is disturbingly believable. Just watch this real-life L’Oreal commercial for something called Youth Code if you don’t believe me. Everyone looks plastic, and all those smiles are fake:

In Advantageous, it’s just gotten so bad that women are willing to effectively kill themselves to have their brain circuitry mapped onto the brain of a young hottie. After Gwen gets the procedure, her company hires her back because she’s suddenly the ultimate spokesperson for their new product.

The most frustrating thing about the things women have to deal with in Advantageous is that it’s all completely avoidable. Every day, we make a choice to deify youth. We watch those L’Oreal commercials without thinking twice about them, even though if we did, we’d see how utterly ridiculous they are. We could just as easily give a collective middle finger to all that brainwashing and acknowledge that older women are actually quite beautiful — and also valuable for a thousand other reasons that have nothing to do with that.

The same is true when it comes to climate change (See? At Grist, everything is relevant to climate change). Every day, our society makes a choice not to prioritize the natural world, and every day, we get closer to a world that’s heartbreakingly avoidable. Advantageous is a thoughtful look at one possible future, and it’ll leave you thinking hard about what that future is and why — something we should be doing more often, given our current predicament.