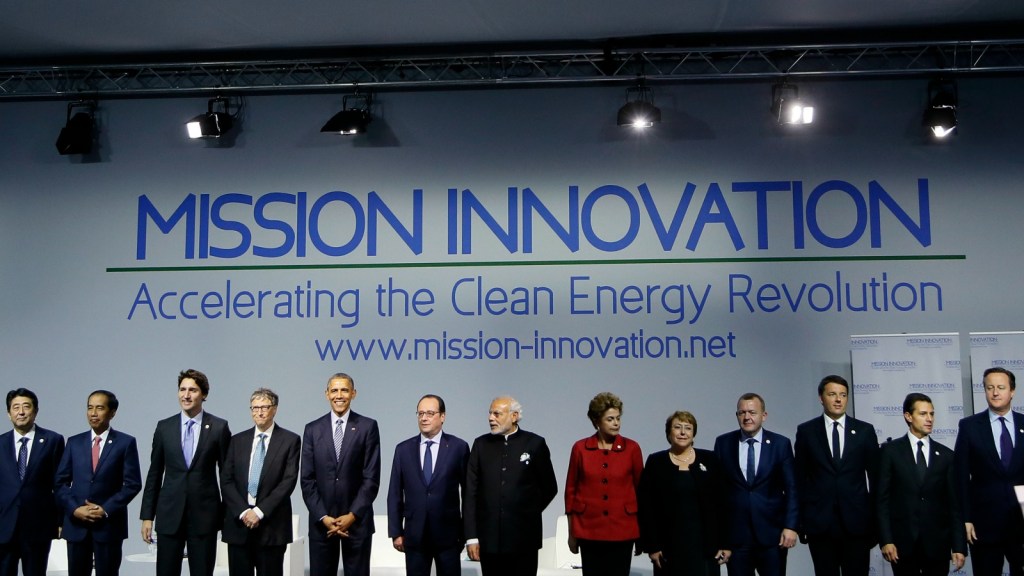 Billionaires Bill Gates, Mark Zuckerberg, Richard Branson, and other high-profile entrepreneurs have pledged to spark a “new economic revolution” based around clean energy after launching a new investment drive for renewables.

The Breakthrough Energy Coalition, made up of more than 25 investors from 10 countries, launched in Paris on Monday as part of the U.N. talks where nations are thrashing out an agreement to finally confront the issue of runaway climate change.

The group will mainly invest in early-stage clean energy companies across a range of sectors, such as electricity generation and storage, transportation, and agriculture. The initiative has been announced in conjunction with Mission Innovation — an effort from 21 governments, including the U.S., Britain, Australia, Germany, China, and Brazil, to double the amount of public money going into clean energy innovation.

It’s expected this will bolster governmental assistance in renewables such as solar to wind energy to $20 billion.

Gates said the world will be using 50 percent more energy by the middle of this century than it does today, which should benefit the world’s poor but is problematic because most of this energy will be derived from fossil fuels such as coal and oil.

“The renewable technologies we have today, like wind and solar, have made a lot of progress and could be one path to a zero-carbon energy future,” he said. “But given the scale of the challenge, we need to be exploring many different paths — and that means we also need to invent new approaches. Private companies will ultimately develop these energy breakthroughs, but their work will rely on the kind of basic research that only governments can fund. Both have a role to play.”

Zuckerberg said current progress towards sustainable energy is “too slow” while Branson added: “We must produce an abundance of clean, renewable energy and drive further innovation to make the next generation of energy more efficient. It will benefit the environment, our society, and the economy.”

Hoffman said efforts to transform energy sources have struggled because they require collaboration between private and public sectors.

“The swords that cut this Gordian knot: breakthrough technologies built and deployed by entrepreneurial companies with global scope,” he said. “Making the right investments in the right innovations now is essential to solving this energy challenge for current and future generations across the planet.”

The group hasn’t put a dollar figure on its level of investment, but said it will be focusing its resources on government-funded innovation that comes from countries signed up to the Mission Innovation initiative.

Global investment in clean energy increased to $270 billion last year, the first significant increase after a three-year lull in investment. China led the way with $89 billion in new money for renewables, followed by the U.S. at $51 billion.

The tumbling costs of renewables — solar, for example, has dropped in price by 70 percent since 2009 — has helped bolster installation but experts have warned that dependency upon fossil fuels will need to be wound back more quickly if the world is to avoid dangerous climate change fueled by greenhouse gases.

According to the Intergovernmental Panel on Climate Change, most of the world’s electricity can — and must — be produced by low-carbon sources by 2050. The panel said that renewables needed to grow from a 30 percent share today to 80 percent of power generation by 2050, with fossil fuel energy without carbon capture and storage technology phased out by 2100.

“Now, these incredible public and private commitments, which are historic, essential, and timely, show that the nations of the world — as well as many of the world’s leading visionaries and philanthropists — are committed to making clean energy even more widespread, even faster,” he said.

“What’s now clearer than ever is that our future will be 100 percent clean energy, and that dirty fossil fuels are merely riding out their final wave.”