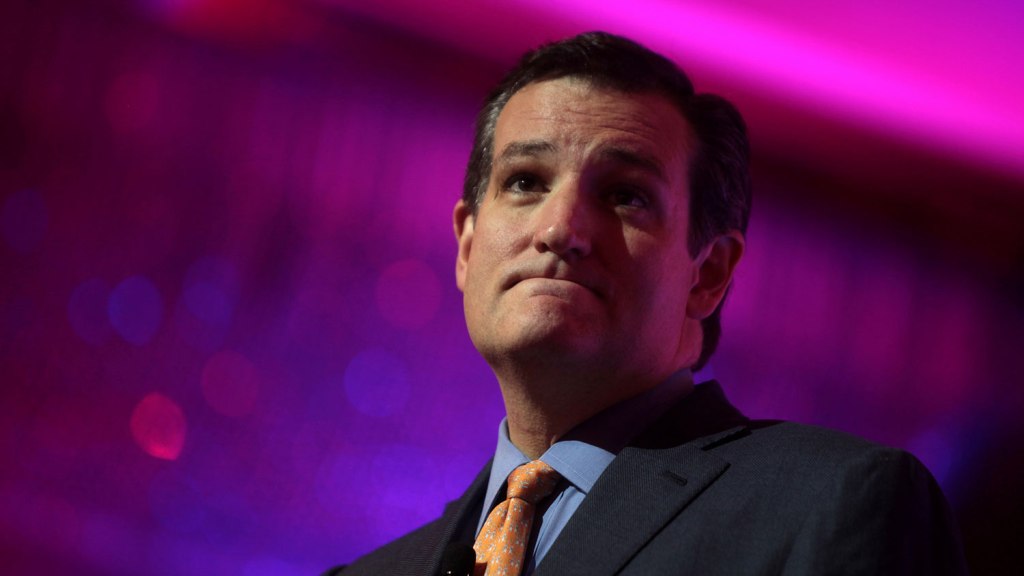 “This is a historic milestone in space exploration,” he gushed to Politico. To the National Journal, he crowed that it was “NASA doing what it does best, pushing the boundaries of our imagination by traveling to the unknown.”

But while Cruz is clearly eager to cheerlead for NASA on the day of this kickass achievement, he’s been singing a very different tune over the past few months, as the New Horizons spacecraft has been pushing to the edge of the solar system. Here’s a jaw-dropping look at what New Horizons found, in case you haven’t seen yet:

Cruz has good reason to be watching the fly-by closely: He’s in charge of the Senate’s subcommittee on Space, Science, and Competitiveness, which oversees NASA. His chairmanship has centered on a campaign to correct what he sees as an imbalance in NASA’s activity: too much focus on Earth science, and not enough traveling to other planets. The Pluto mission is a perfect example of what he wants to see more of.

But NASA is also one of the main purveyors of the satellite observations of Earth that are a basic necessity for many fields of Earth science. That’s the part Cruz doesn’t like: He wants to slash the agency’s budget for Earth sciences — in particular, for climate change, a subject on which Cruz’s theories are, in the words of one scientist, “a load of claptrap.”

It’s not just Cruz. In the House, Republicans are forging ahead with a bill that would gut $90 million from NASA’s Earth science budget.

There are a couple major problems with that approach, and they make Cruz’s lauding of the Pluto mission distinctly ironic and hypocritical. First, NASA is uniquely equipped among federal agencies to send satellites into space, so it would be hard to transfer its Earth research to some other outfit. (These are the very satellites, by the way, that produce the data Cruz likes to erroneously cite as evidence against global warming.)

But perhaps even more importantly, it’s pretty hard for scientists to make sense of what they see on other planets if they don’t understand the one we’re on.

Cruz’s attitude belies a deep misunderstanding of how NASA uses basic science — the very types of research that enabled the New Horizons spacecraft to reach Pluto in the first place — says Andrew Rosenberg, director of the Center for Science and Democracy at the Union of Concerned Scientists.

“It doesn’t make sense to pick out one achievement as if it isn’t built on all this other basic research — everything from material science, to Earth science, to developing new instruments,” he said. “It’s not as if you have a standalone program for space that doesn’t depend on a huge number of other fields.”

Consider, for example, data about a new planet’s atmosphere, gathered by a passing spacecraft. What can scientists compare that to, if they don’t understand the Earth’s atmosphere, Rosenberg said. “The same goes for water, the motion of continents, and everything else we’d want to know about some far-off planet.”

The reverse is also true, said David Grinspoon, an astrobiologist and visiting scholar at the Library of Congress: There’s a lot we can learn from other planets about our own. He pointed to the hole in the ozone layer as a classic example: Scientists were first alerted to the possibility that the use of certain chemicals on Earth could erode the ozone by studying the atmosphere of Venus.

“The effort to explore the solar system and the effort to learn what we need to learn to do a better job as stewards of the Earth are really one and the same,” he said. “We can’t understand other worlds without using experience and techniques we gain from studying Earth, and a lot of discoveries about Earth have come about from exploring other planets.”