On the heels of a report linking 77 earthquakes in Ohio to fracking, a Texas city in an area rife with drilling operations was hit with a wave of 11 earthquakes in 24 hours on Tuesday and Wednesday. The most intense registered 3.6 on the Richter scale, well over the level at which people would feel it — the local 911 service received more than 300 calls from residents trying to figure out what was going on. 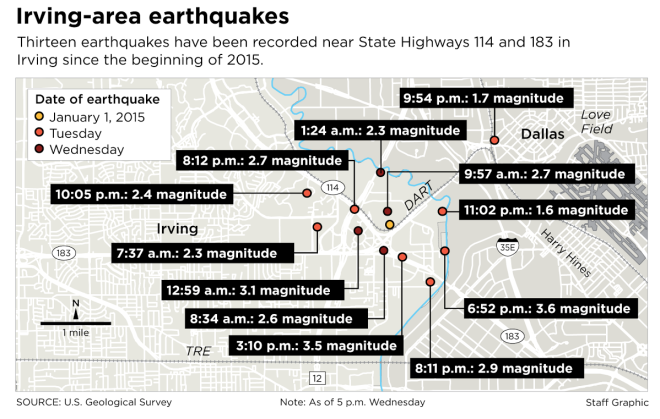 These recent quakes bring the total number to 26 since October in Irving, Texas, a suburb of Dallas. James Joiner reports at The Daily Beast that north Texas has seen more than a hundred quakes since 2008, when fracking operations began to ramp up, a dramatic increase from years previous.

Something similar is going on in neighboring Oklahoma, where, as we mentioned yesterday, there have been 586 earthquakes of magnitude 3 or greater in just one year — the most of any state in the contiguous U.S. in 2014. Between 1975 and 2008, the state only got, on average, three earthquakes of this magnitude per year.

Scientists are pretty clear that Oklahoma’s booming oil and gas industry holds a hefty chunk of the blame for the uptick in seismic activity. And now some residents of Irving — where, as it happens, ExxonMobil is headquartered — are asking questions too. From the Daily Beast article:

Irving itself has more than 2,000 [fracking] sites nearby, and some of the more than 216,000 state wide “injection wells” responsible for disposing of fracking’s wastewater byproduct are in close proximity. Located thousands of feet below the ground, these wells hold millions of gallons of chemically tainted h2o, and … the pressure and liquid combination can combine to “lubricate” fault lines. And that may well be what is happening in the Barnett Shale region around, yes, Dallas and Irving.

Barnett Shale is the largest land-based gas field in Texas, with an estimated 40 trillion cubic feet of natural gas just waiting to be hammered out of the ground … It’s a nearly bottomless potential bank account for corporations with the resources to drill and grind. But, as the people of Irving are now discovering, all of this poking and prodding is not without potential consequences.

Furthermore, seismologists warn that these drilling-related quakes have a good chance of getting worse as more and more wastewater is injected into to the ground. That’s bad news for the folks in Irving, Texas (and in Oklahoma, and Ohio, and Pennsylvania, and Colorado … ).

Australia is so hot even the grapes wear sunscreen