If rising sea levels, worsening wildfires, and butt sweat weren’t enough to worry about, climate change is also responsible for another problem: more mosquitoes, and more of the diseases they bring with them.

Researchers from Climate Central analyzed the length of mosquito seasons in cities around the country, and what they found is Not Good — at least for humans (the mosquitoes are doing just fine). Improving conditions for mosquitoes, the researchers found, have increased the number of mosquito days in cities like Baltimore and Durham, North Carolina, by nearly 40 per year since the 1980s. More than 20 major cities now have ideal conditions for mosquitoes for at least 200 days each year. That’s over half the year to contend with mosquitoes! Over half! And, nationwide, 76 percent of major cities have seen increases in mosquito season over the past 36 years. 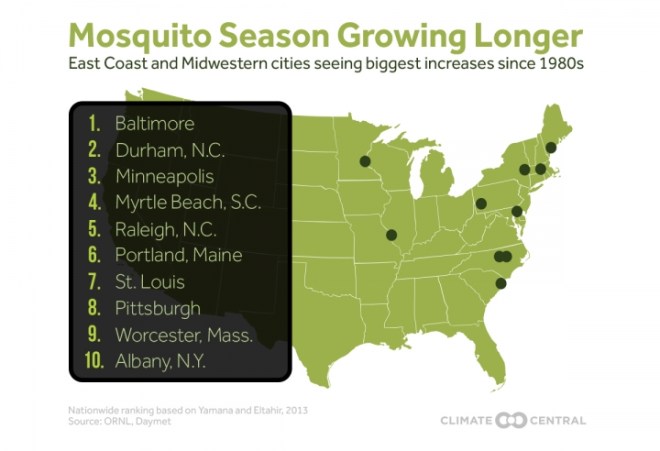 As mosquitoes thrive, so do mosquito-borne viruses like Zika. Already, the Centers for Disease Control and Prevention has confirmed more than 1,400 cases of Zika in travelers returning to the U.S. from abroad. But even if you don’t have plans to travel, that doesn’t mean you’re in the clear: When infected travelers are bit by mosquitoes here, they can then spread the virus at home.

So stock up on mosquito nets, folks. We might all be needing them soon.