As the four-year-long California drought goes from terrible to catastrophic, it’s hard to find any good news.

Love almonds? I’m so sorry for your loss. Water-hungry almond growers have begun to abandon hope, as evidenced by stacks of almond firewood on sale at Whole Foods. Farmers have started to sell water to cities rather than use it to grow crops. Many migrant laborers are out of work because there are fewer crops to plant or harvest. Fish are threatened by record-low runoff, possibly spelling the end of the Delta smelt. The all-important Sierra Nevada snowpack, which doles out water through the dry season as it melts, is at 6 percent of typical levels. Well diggers have become water miners, chasing an ever-declining water table in pursuit of water last seen in the Pleistocene.

The drought, either induced or exacerbated by climate change, is in turn making climate change worse. As California’s reservoirs dry up, hydroelectric power production is dropping. The Pacific Institute recently calculated that the loss of hydropower from 2012 to 2014 drove up power sector carbon emissions 8 percent and cost consumers $1.4 billion, as utilities replaced it with more expensive, and more polluting, natural gas.

Solar power has exploded in California over the past two years as a number of enormous utility-scale projects have come online. California has almost 10,000 megawatts of solar, according to the Solar Energy Industries Association, a national trade group, producing enough power to meet 5 percent of state demand in 2014. Over half of that is from big utility systems, which fill acres and acres with both photovoltaic and mirrored solar systems.

Distributed solar, on the rooftops of homes and businesses, has continued to rocket, despite the fact that state rebates faded away last year. According to Bernadette Del Chiaro of the California Solar Energy Industries Association, California is now home to over 250,000 distributed solar projects, about half of the nation’s total. Pacific Gas and Electric, one of the largest utilities in the state, connects about 4,000 new customer solar arrays each month — a new system every 11 minutes.

The California grid operator, CAISO, tracks energy production in real time on its website and smartphone app. Every day its data shows a great big solar mountain of gold, rising and falling with the sun, and big waves of wind power in blue. And CAISO tracks only utility-owned projects, so that doesn’t even include more than 3,000 megawatts of customer-owned solar. 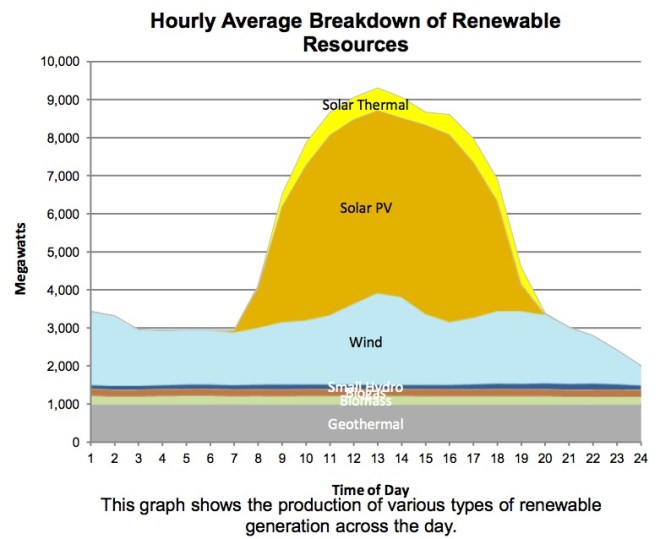 Thanks to the drought, the growth in solar power capacity is coming just in time to capture a growth in sunshine.

Clean Power Research, headquartered in Napa, measures solar radiation for clients in the solar power industry, where millions of dollars hinge on slight variations in sunshine. In research done for Grist, they tapped satellite data to find that the past four years of drought have boosted wintertime sunshine substantially, depending on the location.

Statewide, the sunniest winter was from November 2011 to March 2012, with solar power output from a typical system up 27 percent from average. A typical rooftop system in San Francisco put out a whopping 54 percent more than it did during an average winter. This maps below compare recent winter seasons, with above-average power output in red and below average in blue. 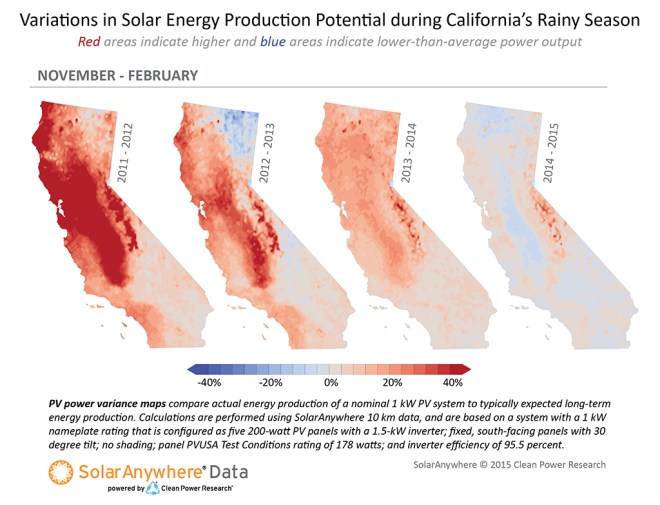 Despite the drought and record high temperatures, this past winter has turned out to be a typical year for sunshine, with statewide solar power output exactly average, due to a 19 percent drop in a very wet December. Power from that San Francisco solar system was down 23 percent in December, rebounding to 22 percent above average in the rainless January.

The impact of rain can last after the clouds clear up. California’s Central Valley is known for an impossibly dense winter fog, called the Tule Fog, that invariably leads to multi-car traffic pileups. Because it rained in December, the moisture resulted in more fog in January, driving down power output from Central Valley solar systems. You can see it clearly in this next set of maps, showing just this past winter, with a big blue valley surrounded by red. 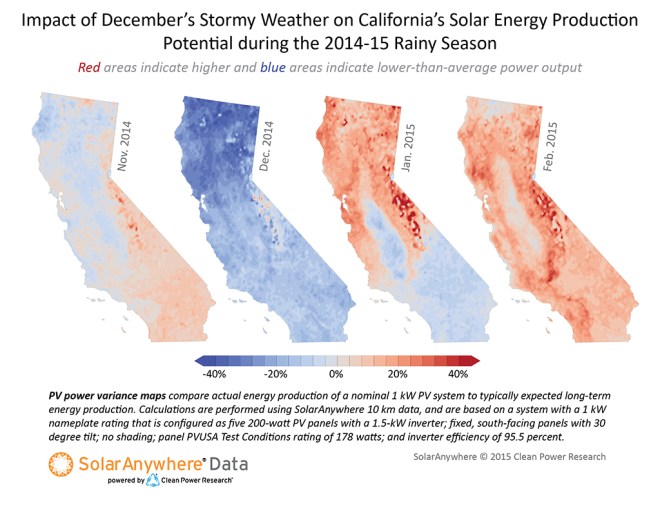 One ironic caveat, pointed out by Adam Browning of Vote Solar, is that homeowners often rely on winter rains to wash off their rooftop solar systems. A lack of rain could leave them coated with dust, impairing their power output. (Some of you California readers may have to get the ladder out.)

Need any more good news about the drought? Wind and solar power are both drought-tolerant, using virtually no water for operations. Big utility-scale photovoltaic and mirrored solar systems consume only small amounts of water for cleaning. Mirrored systems, like the Ivanpah “power tower” plant, are air-cooled, recirculating the water they use for steam production.

Big thermal power plants, in contrast, use vast amounts of water to produce steam and cool the equipment. The “once-through cooling” system used by some coal and nuclear plants is especially thirsty; the plants suck up water, run it through the plant, and then dump most of it back, heated up.

Power plants withdraw more freshwater from rivers, lakes, streams, and aquifers than any other industry in the U.S. — an estimated 22 trillion to 62 trillion gallons in 2008. Unlike agriculture, the power sector puts most of that water back (albeit warmed up). Still, power plants consumed 1 trillion to 2 trillion gallons of freshwater in 2008 that weren’t returned to their sources, according to the Union of Concerned Scientists.

This means families can use more water through power consumption than they use directly within their homes, like from showers, toilets, and dishwashing — two to four times as much, according to John Rogers of UCS.

“Going solar is one of the most effective things you can do to conserve water,” says Will Craven, spokesperson for Solar City. “We should factor that into our policies.”

Wind energy saved 2.5 billion gallons of water in California in 2014 by displacing energy from fossil fuel plants, according to the American Wind Energy Association. “That works out to around 65 gallons per person in the state, or 200 gallons per household, or the equivalent of 20 billion bottles of water,” says AWEA’s Michael Goggin.

The state legislature recently proposed to boost California’s renewable energy share to 50 percent by 2030, up from about 25 percent today. According to UCS, this would cut power-plant water use by half. AWEA calculates that replacing all fossil fuels with renewable energy in California would save 20 billion gallons per year.

With climate change making drought the new normal in California, solar and wind may be the most prudent way to keep the lights on.

How much does density really cut down on driving?