The divestment movement is gaining steam. What can it achieve? 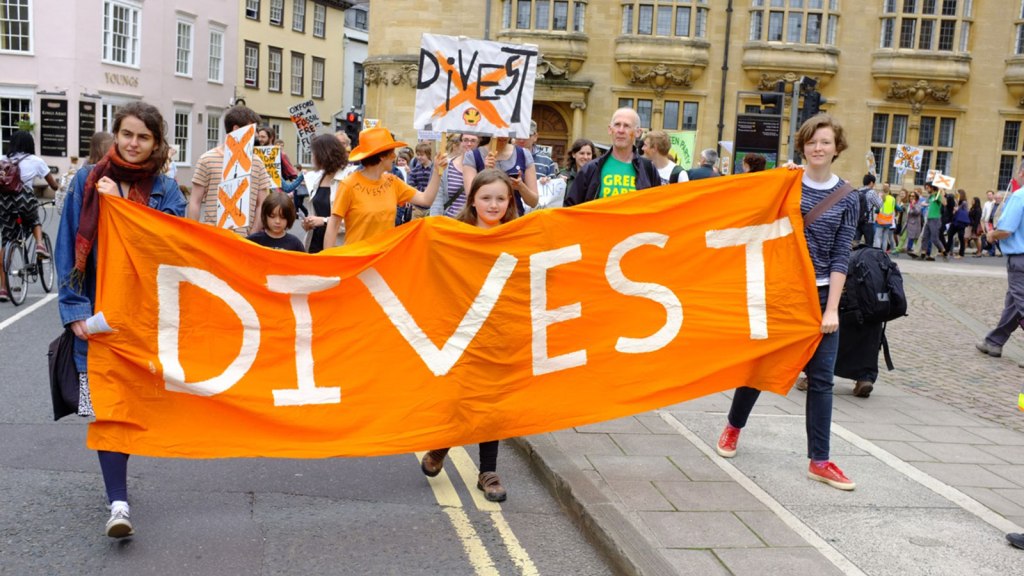 The divestment movement is gaining steam. What can it achieve?

The most attention-grabbing event during the week of the U.N. Climate Summit was the People’s Climate March, of course. But the second most attention-grabbing event was perhaps the Divest-Invest coalition’s announcement that at least 656 individuals and 181 institutions and local governments had signed onto their pledge, from actor Mark Ruffalo to the British Medical Association to the World Council of Churches. These investors collectively control more than $50 billion, and they have promised to make no new investments in the largest 200 oil, gas, and coal companies, sell their existing fossil fuel assets within five years, and invest in clean energy.

Among the groups to join was the Rockefeller Brothers Fund, which drew the attention of major media like The New York Times and The Washington Post, since the family’s fortune was made from oil. (The Rockefellers cleverly spun that apparent irony by saying that John D. Rockefeller was merely at the forefront of energy development for his time, and if he were alive today he would be investing in renewable energy.)

But does divestment actually accomplish anything? When you divest your shares of a fossil fuel company, you sell them to someone else. “In the early stages, you’re not starving companies of capital because if you divest, somebody else invests,” observes Nathaniel Bullard, director of content for Bloomberg New Energy Finance, an energy market news and analysis service. It would take an extraordinarily large amount of divestment to actually hurt a company’s stock price. And if it did, less scrupulous investors might see a deal on the undervalued stock and just prop it back up.

As long as there is money to be made in fossil fuels, someone will make it. No policy expert thinks that divestment will push fossil fuel companies out of business. “When we divested our resources, Exxon didn’t fold overnight with the news. And I divested my little personal pension fund, and they still didn’t,” jokes Jim Wallis, president of Sojourners, a Christian social justice advocacy organization that joined the Divest-Invest pledge.

As long as we place the costs of pollution from extracting and burning fossil fuels on society at large instead of fossil fuel producers and consumers, it may be profitable for oil, gas, and coal companies to keep up their bad work. On the other hand, if you put a heavy tax or a strong cap on carbon pollution, the amount of fossil fuels burned will go down, regardless of what investors do with their money.

So is divestment just a diversion from the work that matters most — convincing governments to adopt carbon caps or taxes? Not according to the activists who are working on both causes at once. They argue that divestment campaigns aid the climate movement by creating opportunities within institutions to discuss climate change. They focus minds on the fact that four-fifths of known fossil fuel reserves need to stay in the ground if we’re to avert the worst of climate change, and the fact that strong future carbon regulations would undermine the profitability of fossil fuel companies, and the fact that the cost of extracting fossil fuels keeps rising as we run out of easy-to-reach reserves and start tapping “unconventional” ones like the Canadian tar sands.

“This is the first time there’s been a lot of analysis of these companies: Where’s demand going? Are these investments sound?” says Danielle Fugere, president of As You Sow, which promotes environmental and social corporate responsibility through shareholder advocacy. “That dialogue has been important. The divestment movement happened along with other [climate] movements, so I do believe it’s been incredibly important in raising issues and fundamentally engaging the business community.”

That engagement can encourage investors to favor government policies that would get ahead of the transition to clean energy, instead of lagging behind it. The week before the Climate Summit, a global coalition of institutional investors concerned with climate change issued a statement calling on national governments to “develop an ambitious global agreement on climate change by the end of 2015.” Doing so, they say, would shift economic incentives and offer regulatory certainty that would make renewable energy investments economical.

The signatories included large pension funds and institutions ranging from the California Public Employees’ Retirement System (CalPERS) to the Church of Sweden. They overwhelmingly have not divested themselves, but they promise to “identify and evaluate low carbon investment opportunities that meet our investment criteria and consider investment vehicles that invest in low carbon assets subject to our risk and return objectives.”

Wallis argues that divestment will actually advance carbon pricing through the political process as well, because it’s part of moving the public to engage on climate change. He says it could be especially effective among devout Christians. “Divesting and investing is a wonderful, practical example of the kind of repentance from an oil economy,” says Wallis. “We could create some moral space if business people and others are going to churches where this is being talked about.”

And even impartial observers agree that it can have an effect. Bullard says that by raising awareness of the risks for fossil fuel companies, divestment campaigns might lead major institutional investors to reduce the size of their fossil fuel investments. “Big investors in a sense divest all the time but they would call it reallocation,” says Bullard. “A large investor might reweight a portfolio down from 12 percent fossil fuels to 8 or 9 percent. None of the groups [that have divested] have enough capital in play to have an impact, but the institutional investors that might reweight risk certainly do. The purpose of the divestment movement in some cases is to draw attention to the risks of investing in fossil fuels — issues such as the changing nature of consumption of fossil fuels and increasing cost of extracting them.”

Divestment campaigns can also force concessions from large institutional investors that help the transition to a clean energy economy. They might not divest fully from fossil fuels but increase investments in renewable energy to mollify activists. Harvard President Drew Faust, for example, refused to divest the school’s $36 billion endowment from fossil fuels, but six months later she announced a series of initiatives such as raising money for climate change research, efforts to reduce the school’s greenhouse gas emissions, and the adoption of guidelines for taking environmental impact into consideration for the endowment’s investment decisions. “Harvard, Yale, and the University of California system have all had to come with some other commitment, which does drive more capital to some other cleaner stuff,” notes Bullard.

On some issues, investors can arguably do more good by holding onto stock and pushing companies to improve their practices than by selling the stock. A major shareholder in a clothing manufacturer that uses sweatshop labor, for example, could pressure the company to improve its labor standards. But that’s because sweatshop conditions are not the company’s product, only a means to producing it. If the product is oil or coal, a company can’t merely adopt the best practices for producing it and solve the problem of carbon pollution. Investor activists like the group Ceres suggest that fossil fuel companies could be encouraged to become energy companies more broadly and invest in renewables. Given the enormity of their potentially stranded fossil fuel assets, their path dependence, and their decades of past behavior, it’s doubtful this will happen. They will go down fighting, trying to squeeze every drop of oil, gas, and coal from the Earth if they can make a penny by doing so.

Another way in which the divestment movement might help constrain fossil fuel production is by making it more expensive for companies to borrow money to build the infrastructure of extraction. If the investor community is more keenly aware of the risks of fossil fuels, it will be harder for fossil fuel companies to sell bonds, and they will have to offer higher returns to bondholders. “Frankly, you almost never starve companies of capital, you make it more expensive or scarcer,” says Bullard.

And if you instead invest in renewables, you help widen their availability and lower their prices. The International Energy Agency estimates that $1 trillion per year in investment in clean energy and low-carbon technologies is necessary to avert catastrophic climate change.

Divestment and reinvestment are certainly not the wholesale climate solutions we need. But if there’s one thing we know about American politics, it’s that it helps to have Wall Street on your side.