It’s all but certain that 2015 will end up as the hottest year on record. And in setting that mark, the world is on track to finish the year 1 degree C above pre-industrial levels, a dubious milestone.

That would make 2015 the first year to crack the halfway mark of 2 degrees C warming, the benchmark that’s been targeted as “safe” climate change and what nations are working toward meeting ahead of climate talks in Paris in December. But Monday’s announcement by the U.K. Met Office hints at how difficult achieving that target will be.

Unlike carbon dioxide, which has risen steadily like a drumbeat every year since the Industrial Revolution due to human activities, the temperature is likely to fluctuate annually and could dip slightly in the coming years (though signs already point to 2016 being even hotter). But the 1 degree C of warming shows how humans are reshaping the climate in the here and now and not some distant future.

The Met Office maintains one of the four major global temperature records. It shows that through September, the planet is running 1.8 degree F (1.02 degree C) above normal. El Niño, the warming of waters in the eastern tropical Pacific, is a contributing factor. But it’s being layered on top of a long-term climate change signal, which has seen the world get hotter and hotter since record keeping began in the late 1800s. 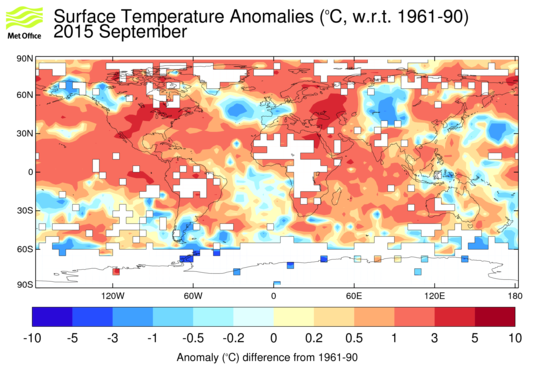 “We’ve had similar natural events in the past, yet this is the first time we’re set to reach the 1 degree C marker and it’s clear that it is human influence driving our modern climate into uncharted territory,” Stephen Belcher, the director of the Met Office Hadley Center, said in a statement.

In a separate announcement on Monday, the World Meteorological Organization (WMO) announced that greenhouse gas concentrations in the atmosphere have reached record highs. That includes global carbon dioxide reaching 400 parts per million (ppm) for the first time earlier this year at 40 carbon dioxide-monitoring stations.

Carbon dioxide and other greenhouse gases in the atmosphere are the main drivers of climate change. The world has seen carbon dioxide risen more than 120 ppm since pre-industrial times. Readings at some stations, including the gold standard at Mauna Loa Observatory, are set to pass 400 ppm for the foreseeable future later this year. The WMO expects the global average to pass 400 ppm in 2016 as well.

Watch this video animation from NASA that shows how carbon dioxide moves around the planet:

With the planet having already run through two-thirds of its carbon budget — the amount of carbon that can be emitted before the world warms 2 degrees C — scientists say that more action is needed to avoid the worst impacts of climate change.

Even if the world limits warming to 2 degrees C, there are still wholesale changes in store for the planet.

Will Utah’s state prison end up being an environmental catastrophe?