A short-run weekly newsletter analyzing federal climate action during the first months of the Biden administration.

Hello, I’m Nathanael Johnson, and today is Day 45 of the Biden administration. This week, legislators unveiled a bill that aims to fulfill some of Biden’s biggest campaign promises.

On Tuesday, House Democrats introduced their opening bid for major legislation on climate change. The Climate Leadership and Environmental Action for our Nation’s Future Act, or CLEAN Future Act, would require electricity suppliers to run on 100-percent clean energy by 2035, appropriate 40 percent of federal dollars from the bill to benefit communities that have suffered from environmental injustice, and direct states to entirely eliminate carbon emissions by 2050. It’s ambitious, far-reaching, and there’s no way it will pass in its current form.

We can leave number 3 to the historians. Path 1 would require such radical changes that the bill would be unrecognizable from its current form. A dozen Senate Republicans might vote to jumpstart American competitiveness in a future green economy, but they are not going to cross the aisle to vote for big government mandates. 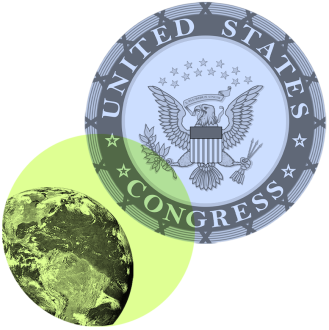 That leaves option 2. Budget reconciliation is the way Democrats could pass a Senate bill with a simple majority, rather than the 60 votes required to avoid the dreaded filibuster. Congress created this workaround in 1974 to prevent gridlock from thwarting urgent, budget-related bills, so that the government isn’t always running out of money. Each year, Congress can effectively use reconciliation to pass one tax-and-spend bill and, if need be, raise the debt limit.

One of the sponsors of the CLEAN Future Act, Democratic Representative Frank Pallone, Jr. of New Jersey, told reporters that he isn’t ruling out passing the bill via reconciliation. The problem is that the CLEAN Future Act is not a tax-and-spend bill or a debt-limit bill: It’s more of a basic law. To go through reconciliation, it would have to shift to operate entirely in the realm of money. Instead of simply forcing electrical utilities to embrace clean energy, it might increase taxes on those burning fossil fuels and subsidize those that built wind turbines.

If the CLEAN Future Act morphs into a budget bill, it would use up one of Democrats’ three precious chits. They could pass a budget reconciliation bill in each of the fiscal years 2021, 2022, and 2023 (which actually begins in October 2022). That’s assuming midterm elections in November 2022 bring in a new, more-Republican Congress.

The COVID stimulus bill has already claimed the 2021 reconciliation chit. So with two left, the Democrats will have to make a Sophie’s choice between their priorities. Will they tackle voting rights? Health care? Police reform? Or will they tie the fortunes of the Biden administration to climate action?

The Biden Administration is trying to save codes that would make new buildings energy efficient. Buildings suck up 40 percent of all the energy produced in the country, and a 2019 update of the codes would increase efficiency 14 percent, thanks to votes from government officials. But on Thursday, the International Code Council acceded to an industry demand to exclude government officials from voting on the code changes. Biden’s Department of Energy issued a letter saying it won’t take this lying down.

The kids’ climate lawsuit will not find a friend in Biden. The young plaintiffs in Juliana v. United States say they have a constitutional right to a stable climate, and they are suing the government to force it to guarantee that right. This week the Justice Department made its first defensive move against the case under the Biden Administration, showing that it will continue the fight of the previous two administrations against the lawsuit.

How much damage does every ton of released carbon do? Enough that it costs the country $51, according to an interim government assessment. It’s likely to change, as researchers refine their models, but for now, $51 is the number the government will start using immediately in cost benefit analysis to decide if it makes sense to widen a highway, crack down on methane leaks, or build new transmission lines.