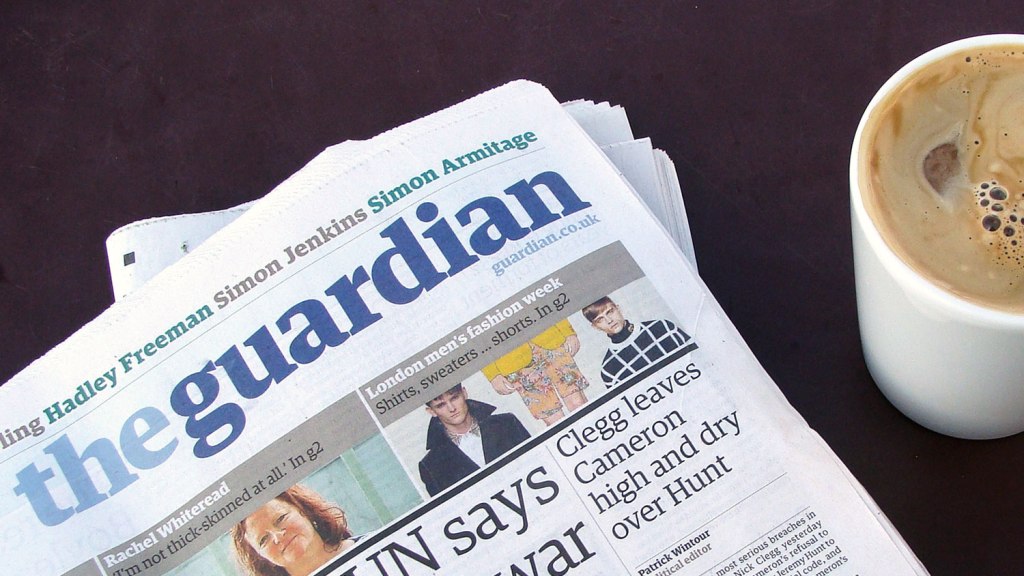 After 20 years at the helm of one of the United Kingdom’s most influential newspapers, Alan Rusbridger is about to step down as editor of the Guardian. He’s not going quietly: In an op-ed a couple weeks ago, Rusbridger pledged to use his waning weeks to launch a full-out war on climate change:

So, in the time left to me as editor, I thought I would try to harness the Guardian’s best resources to describe what is happening … For the purposes of our coming coverage, we will assume that the scientific consensus about man-made climate change and its likely effects is overwhelming. We will leave the sceptics and deniers to waste their time challenging the science. The mainstream argument has moved on to the politics and economics …

We will look at who is getting the subsidies and who is doing the lobbying. We will name the worst polluters and find out who still funds them. We will urge enlightened trusts, investment specialists, universities, pension funds, and businesses to take their money away from the companies posing the biggest risk to us. And, because people are rightly bound to ask, we will report on how the Guardian Media Group itself is getting to grips with the issues.

The Guardian, a Climate Desk partner, is no stranger to global warming reporting. It was the first daily paper in the U.K. to institute a dedicated section for environment coverage. The paper has extensively covered international climate negotiations, fracking on both sides of the Atlantic, and the latest climate science, while also pouring resources into lush interactive web features. But its new initiative promises to go even further.

The series kicked off with a pair of excerpts from author and activist Naomi Klein’s recent book on the tension between capitalism and the climate crisis. Over the next few months, it will include investigative features, daily news stories, videos and podcasts, and even original artwork and poetry. The pieces will appear not just on the paper’s environment pages, but across all sections, from business and tech to lifestyle and the arts. The overarching idea is that from now until Rusbridger’s departure in June, any climate story that any reporter has had kicking around, but has never had time to tackle, will get priority treatment.

But the centerpiece is all about the penultimate sentence in the excerpt above: “We will urge … ” This week, the Guardian kicked off a petition calling on the world’s two largest charitable organizations, the Gates Foundation and the Wellcome Trust, to divest their financial holdings from the world’s 200 top fossil fuel companies. As of Thursday afternoon, the petition had gathered over 100,000 signatures, and earned the support of the country’s energy minister.

If that sounds a lot like straight-up activism, that’s because it is.

Rusbridger proposed the petition a few months ago at a meeting that included a who’s-who of the paper’s top editors, designers, and website coders, said James Randerson, an assistant national news editor who handles climate reporting.

“There were some voices who questioned whether a campaign was the best use of the Guardian’s voice,” Randerson said, “because the Guardian is about reporting and uncovering things that people can use in advancing an agenda.” But Rusbridger’s argument, Randerson said, was: “We’ve tried to do that for quite a while, and we needed to do something that had a bit more cut-through. We felt that it was time to take that step.”

The idea of a newspaper undertaking an openly activist campaign straight from the playbook of Greenpeace or the Sierra Club might seem strange to American audiences, who are accustomed to news outlets at least purporting to adhere to some degree of journalistic objectivity. But in the U.K., newspapers taking a step across the line between news and activism is, well, less newsworthy. In 2014 the Guardian waged a similar campaign against female genital mutilation. Prior to the 2009 U.N. Climate Summit in Copenhagen, the Guardian convinced 56 newspapers from around the globe to publish a front-page editorial calling for climate action. Randerson also characterized the paper’s extensive reporting on Edward Snowden and the National Security Agency as a kind of unofficial campaign against state surveillance. And the Times of London has an ongoing campaign to promote safety for urban cyclists, inspired by an accident that nearly killed one of its reporters.

Is it time for the Washington Post and the New York Times to launch climate petitions of their own? Randerson wouldn’t say, but he did argue that especially in the United States, “The media have not done a service to their readers in explaining what’s really at stake here.”

Now we get a chance to see if a more direct approach does the trick.