The Obama administration has its own climate denial problem 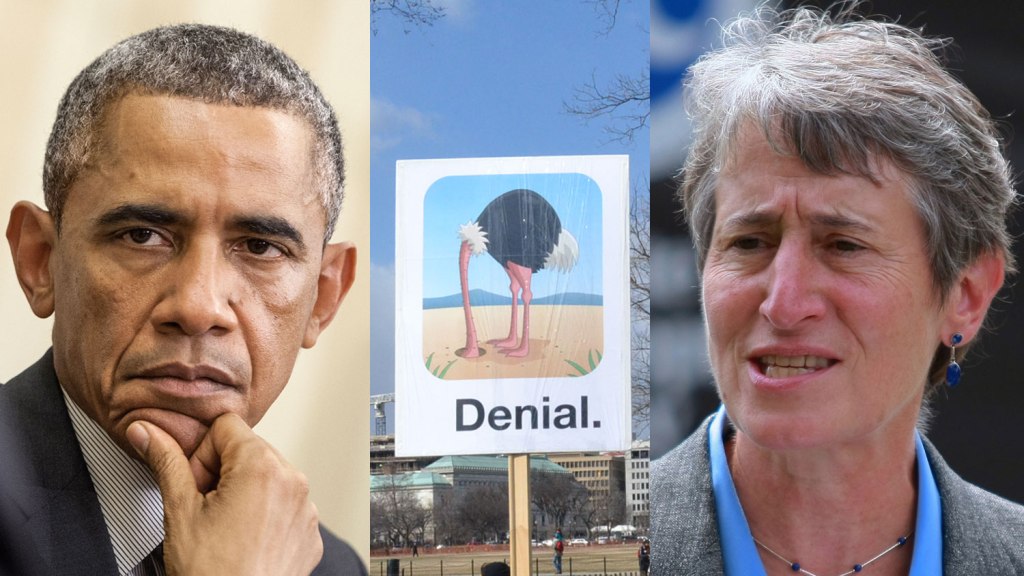 The Obama administration has its own climate denial problem

On Earth Day, President Obama will visit the Everglades and speak about the threat of climate change and what his administration is doing to address it. In a preview of the speech this weekend, Obama said, “This is the only planet we’ve got. And years from now, I want to be able to look our children and grandchildren in the eye and tell them that we did everything we could to protect it.”

The White House likely hopes to draw a contrast between the actions his administration is taking to help communities prepare for the impacts of climate change and the outright climate denial we’ve seen from some lawmakers in Florida and Washington, D.C. Florida Gov. Rick Scott has been criticized in recent weeks after it was reported that state officials were “ordered not to use the term ‘climate change’ or ‘global warming’ in any official communications, emails, or reports.” Last week, Greenpeace published additional email communications showing that a Florida Department of Environmental Protection official instructed a scientist to “make no claims as to cause” of the state’s sea level rise.

Florida officials’ efforts to hide the threat of climate change are particularly irresponsible given how vulnerable Florida is to the impacts of climate change like rising sea levels. As a White House aide explained, “The Everglades are flat, and they border a rising ocean. As the sea levels rise, the shorelines erode, and that salty water travels inland, threatening the aquifers supplying fresh drinking water to Floridians. That doesn’t just destroy a beautiful and unique national landscape. It threatens an $82 billion state tourism economy, and drinking water for more than 7 million Americans — more than a third of Florida’s population.”

Of course it’s not just the Everglades and Florida. National parks and other protected places that communities depend upon for clean water, access to open space, wildlife, and tourism are threatened everywhere, and the National Park Service considers responding to climate change its “greatest challenge.” And as part of “National Park Week” this week, the White House is inviting people to share images of the natural spaces they would fight to protect, in the hopes that it will help “change the way people think about climate change by connecting it to the spaces we love and our local communities.”

In the face of the ridiculous climate denial from some public officials, it’s encouraging to see President Obama continue to speak out about climate change. But unfortunately, a different kind of climate denial still exists within the Obama administration — denial about the impacts on our climate of selling huge amounts of publicly owned fossil fuels to the coal, oil, and gas industries.

Ironically, the same government agency responsible for protecting threatened national parks like the Everglades — the Department of Interior — is also helping fuel climate change by promoting the extraction of fossil fuels on our public lands and waters, from Shell’s plans to drill for oil in the Arctic to Peabody’s massive coal strip mines in the Powder River Basin. A recent report by the Center for American Progress and the Wilderness Society shows that these publicly owned fossil fuels could have accounted for a full 24 percent of all energy-related U.S. carbon pollution in 2012, with more than half of that coming from coal. Indeed, the Obama administration has sold off an astounding 2.2 billion tons of publicly owned coal for just about one dollar a ton. When it’s burned, it will generate more carbon pollution than the entire European Union does in a year.

There is some good news: Thousands of people have called on Interior Secretary Sally Jewell to protect public lands, not coal companies, and Jewell recently called for an “honest and open conversation about modernizing the federal coal program,” asking, “How do we manage the program in a way that is consistent with our climate change objectives?”

But so far Jewell and Obama have not taken any serious steps to stop these giveaways to the coal industry. Until the Obama administration gets serious about addressing the huge amounts of carbon pollution from the mismanagement of our public lands and waters, he won’t be able to say that “we did everything we could to protect” our planet and communities from climate change.

Kelly Mitchell is climate and energy director for Greenpeace USA.