The U.S. and India keep pushing toward a climate deal 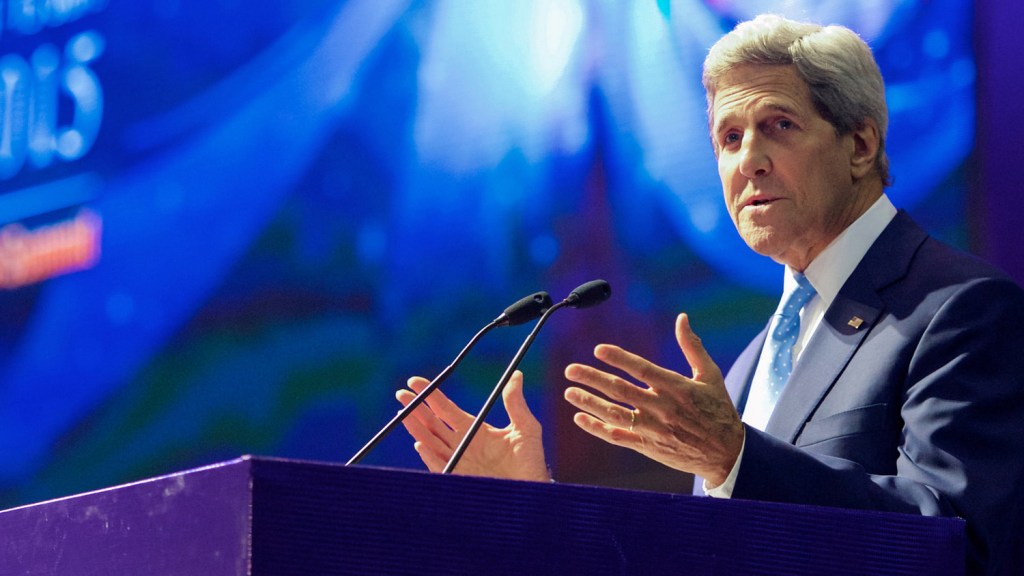 The U.S. and India keep pushing toward a climate deal

Preparations are well underway for President Obama’s visit to India later this month. New Delhi is emptying the cattle from its streets. The U.S. Secret Service is installing anti-aircraft guns on the city’s rooftops. And U.S. Secretary of State John Kerry just made a visit himself to lay the groundwork for some big announcements — most notably on climate change.

Officials in the U.S. delegation traveling with Kerry told the Associated Press that there could soon be news about a solar energy deal, a joint effort to bring electricity to the country’s rural areas, and, possibly, a carbon-reduction pact, hinted about for months, that Obama and Indian Prime Minister Narendra Modi would both sign.

The possibility of a climate deal between the U.S. and India, the world’s third largest annual emitter of greenhouse gases, is inviting comparisons to the big U.S.-China announcement late last year. It’s unlikely, however, that we can expect anything so far-reaching; India has repeatedly reminded the world that its people are very poor, and argued that it therefore deserves some leeway on the whole emission-reduction thing. The country points out that even as its emissions continue to grow (see graph on the left below), its per-capita emissions are well below the world average (see graph on the right).

Still, in the run-up to Obama’s visit, Kerry, who brokered the China-U.S. deal, has been putting climate change front and center. At a speech yesterday in Gujarat, Modi’s home state — at which both U.N. Secretary-General Ban Ki-moon and World Bank President Jim Yong Kim were present — Kerry used dire terms to call for action in the face of an impending crisis.

“There is one enormous cloud hanging over all of us which requires responsibility from leaders,” Kerry said. “Global climate change is already violently affecting communities not just across India but around the world. It is disrupting commerce, development, and economic growth. It’s costing farmers crops. It’s costing insurance companies unbelievable payouts. It’s raising the cost of doing business, and believe me, if it continues down the current trend-line, we will see climate refugees fighting each other for water and seeking food and new opportunity.”

As India’s carbon emissions continue to grow, Modi has been making a number of decisions on the environment that combine a gung-ho attitude toward technology and innovation with a deregulatory approach to business. It makes for an interesting environmental agenda in which polluters anticipate facing less scrutiny while the country simultaneously pushes renewable energy and encourages building sustainability.

Modi has been particularly keen on seeking foreign investment for solar power, which, at the moment, still costs up to 50 percent more than India’s No. 1 source of power, coal. At the same investment summit where Kerry spoke on Sunday, U.S.-based SunEdison and the Indian energy conglomerate Adani Enterprises announced a $4 billion investment in a joint project to produce low-cost solar panels. The proposed factory would become one of India’s largest manufacturers of solar panels, with plans to make them so cheaply that they “can compete head to head, unsubsidized and without incentives, with fossil fuels,” according Ahmad Chatila, president and CEO of SunEdison. (Adani, apparently hedging its bets, also announced an agreement to explore liquefied natural gas opportunities with an Australian energy company.)

The announcement of any emission-reduction agreement between the U.S. and India will come, if it comes, in two weeks, when Obama comes to New Delhi for the city’s Republic Day celebration. Reuters notes that there’s a possibility that the leaders will be wreathed in air pollution during a Jan. 26 parade, at which Obama will be guest of honor. New Delhi’s smog is dense, and lately it’s been bad enough, according to a U.S. EPA scale, to cause “significant aggravation of heart or lung disease and premature mortality in persons with cardiopulmonary disease and the elderly” and a “significant increase in respiratory effects in the general population.” At the 2010 Republic Day celebration, the pollution was so thick that the crowds couldn’t see that year’s guest of honor, the president of South Korea.

The pollution would tinge any environmental announcement between the two leaders with a bit of irony. Even if India, with its low per-capita emissions, wants to leave the fight against climate change up to countries that bear more historical responsibility for the problem, there is a strong interest in improving air quality for the tens of millions of Indians living in its major cities. That, too, could prompt the country to come up with a plan to shift away from or limit the use of dirty fuels.