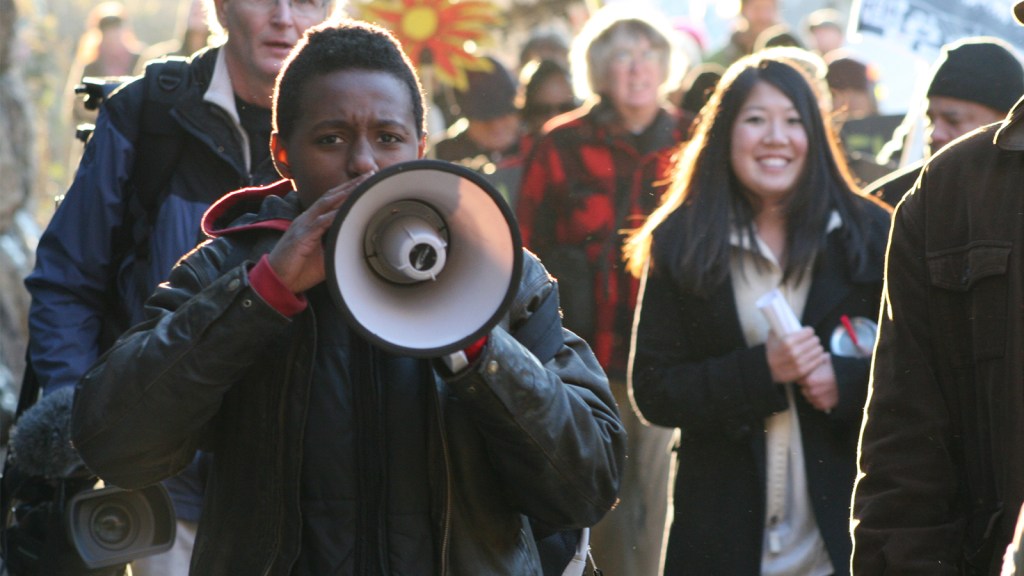 The world might be headed to hell in a plastic basket of coal, but like Bob Marley said, you can’t blame the youth. In fact, the youth are rising up to make sure that nobody ever tries to pin this on them. Organizers and politicians like to use literal poster children as a way to pull on heartstrings when reaching policy impasses. But kids today are taking the climate change fight into their own hands, refusing the role of mere victim and collateral damage, as we’re seeing at the local level in Baltimore, and also on the national stage.

I reported last December that students in South Baltimore have been organizing their neighbors to fight off a trash incinerator that the state of Maryland has permitted to be built within a mile of two schools in the area. The low- to working-class Curtis Bay neighborhood is already saturated with coal and waste processing plants clustered among homes. So much pollution spews from these plants that residents regularly return from work to find their houses coated with ash and soot.

The trash incinerator — which would be the first to be built in the U.S. since 1997 and will reportedly be the world’s largest if completed — is an experimental brand that hopes to convert a mixture of garbage — but mainly tires, wood, and paper — into electricity. The Baltimore City Schools board of commissioners has already signed a contract committing to purchase fuel from the incinerator company, Energy Answers. Given the harmful emissions certain to join the neighborhood pollution mix from burning rubber, the school board’s contract has essentially traded away the health of its students for a little cheap electricity.

The youth of Curtis Bay ain’t havin’ it, though. Under the banner organization Free Your Voice, they have over the past couple of years researched the harmful implications of breathing in another incinerator (one already exists in Baltimore) while protesting its construction. They took their demands directly to school district leaders last week, presenting before the school board using the most powerful tool at their disposal: hip hop.

I was headed to Baltimore from D.C. to catch this in person, but heavy storms turned me back. Luckily the reporters at TheRealNews.com have been all over this story, reporting how Energy Answers plans to comply with state and federal air pollution standards through offsets. Translation: The company will pay for air quality improvement somewhere else to make up for its dirty emissions in Baltimore.

According to Energy Answer, the company is actually doing Maryland a solid by burning these solids for fuel as opposed to leaving the state to rely heavily on coal. “[T]he question is not whether waste-to-energy facilities are better for the environment than coal-fired generation or better for the environment than the land filling of trash, but rather whether waste-to-energy facilities are better than the combination of coal and land filling, based on the best available science. The answer to that question is a qualified ‘yes,'” reads the company’s site.

Destiny Watford, the 18-year-old activist who helped start Free Your Voice, framed the problem in equity terms when she presented before the school board last week:

The local news site Baltimore Brew reported that the boardmembers applauded Watford and the Free Your Voice students and accepted their invitation to visit the Curtis Bay neighborhood to see the pollution cluster for themselves. The invitation alone suggests a certain distance between the board and this neighborhood they’ve thrown under the bus, but the kids have earned a win for drawing the school leaders in to face the community.

The Baltimore students are not alone in their heroic environmental efforts. Last month, the youth nonprofit Kids vs. Global Warming sued the federal government for failing to produce an adequate climate change recovery plan.

“The welfare of youth is directly affected by the failure of government to confront human-made climate change, and unless the government acts immediately to rapidly reduce carbon emissions … youth will face irrevocable harm: the collapse of natural resource systems and a largely uninhabitable nation,” reads the lawsuit, as reported by Al-Jazeera America.

This all falls in line with a groundswell of youth activism the nation has seen lately on a number of issues, whether it’s kids walking out in Chicago over school closures, in Arizona over immigrant human rights, or the Dream Defenders taking over state government offices in Florida to protest racial profiling policies. It’s all reminiscent of the 1960s civil rights struggles, when children as young as 10-years-old defied their parents’ orders to march and demonstrate, even when police violence was certain to spare no mercy.

For the problems we are passing down to them, we don’t deserve a Whitney Houston song about how the kids are the future. We’ve played that refrain to death, and it hasn’t made our lawmakers move any quicker. For this, we deserve Pink Floyd, “Another Brick in the Wall”:

Meaning, these youth could easily disavow it all — our schools, laws, rules, and society in general. Many already have. We’re leaving them with few other choices. But watching them step up to be the leaders we have failed to be is a whole other marvel, and one that should be encouraged. This is what Nas and Slick Rick meant when they used hip hop to say “Hey, young world, the world is yours.”