Smokestack city: An industrial neighborhood decides it has had enough 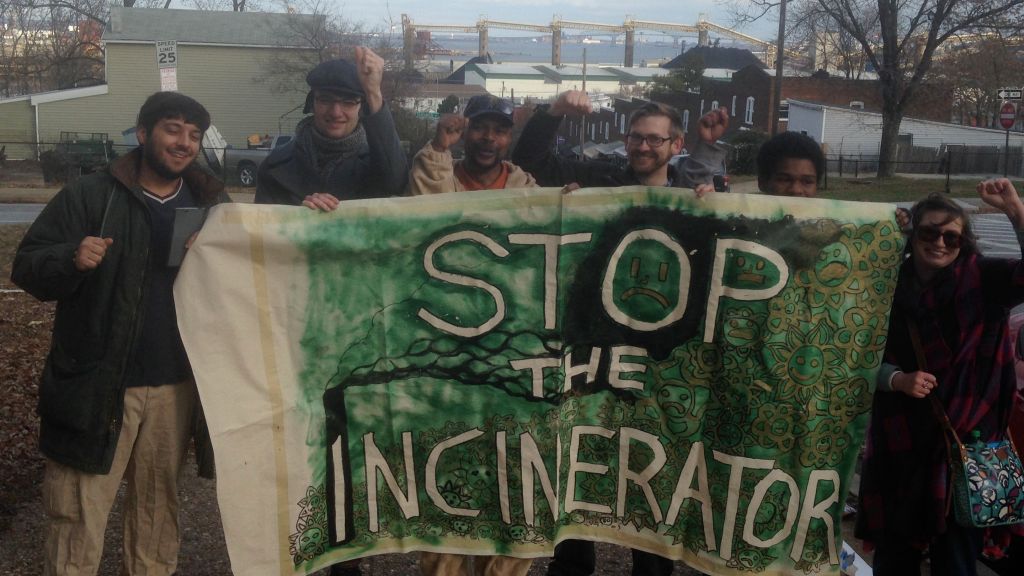 Smokestack city: An industrial neighborhood decides it has had enough

Charles Graham approaches the front porch of a home perched a block up the hill from his school, Benjamin Franklin High, in South Baltimore. From that porch, you can see the school, and in the background, a row of chemical plants and coal transfer stations that provide most of the jobs here. The skyline envisages a school-to-polluting-plant pipeline — a line Graham hopes to rise above by urging cleaner energy projects in this place he calls home.

The 17-year-old environmental activist knocks on the front door and is greeted by Winston Bower, a longtime resident who looks old enough to be Charles’s grandfather. “Do you know about the incinerator they’re building less than a mile away?” Graham asks him.

Bower says he read about it in a newsletter circulating around the neighborhood and doesn’t approve of it: “It’ll just be polluting us even more than it already is around here.”

Graham gets Bower to sign a petition he’s carrying with the names of dozens more in the Curtis Bay neighborhood who disapprove of the Fairfield Renewable Energy Power Plant project, a waste incinerator/power plant planned nearby.

The high school senior is out canvassing the neighborhood on a frigid, windy Saturday afternoon with a small group of social justice activists determined to stop the construction of the incinerator. They all hold leaflets that read “We Demand Fair Development Stop the Incinerator!” They have been walking these streets for weeks, informing residents about the “waste-to-energy” plant, which, if it ends up like two other incinerators in Baltimore, could be as poisonous, if not more, to the air as the coal-fired plants in the area, according to a report [PDF] from the D.C.-based nonprofit Environmental Integrity Project.

Graham’s high school, and also an elementary school, sit within a mile of the incinerator site, which is already considered by EPA air monitoring as one of the most toxic air environments in the nation.

Bower is all too aware of the ongoing legacy of pollution around his home, where he’s lived for 19 years. Talking on his porch, he brings up a 2006 incident not far away where “companies dumped ash all in the water supply, messing everybody’s wellwater up.”

He’s referring to Baltimore Gas and Electric Co. and Constellation Energy, which were found liable for dumping fly ash from coal burning power plants in pits around neighboring Anne Arundel County. When carcinogens showed up in privately owned water wells near the site residents sued, and won a $45 million settlement from the companies in 2008. A shopping center has since been built over the contaminated site.

It’s not an uncommon story, says Randy Ford, an older activist who works with the human rights organization United Workers and is canvassing the community with Graham. City officials have tried to redevelop a lot of Baltimore and surrounds with shopping and tourism in mind, “but they forget that we have problems with contamination around this entire area,” Ford says. “They just pave over it and forget about it.”

The spot where the company Energy Answers wants to build the trash-to-energy plant is the site of a former agricultural chemicals facility called FMC Corporation. More than one community resident asks the canvassers about large underground tanks of pesticide left at the site left by FMC. If Energy Answers builds on top of those underground vats, they worry that toxic leaks into the groundwater or the air could follow.

“It stinks enough over here already,” said Shirley Pack, a 70-year-old grandmother who lives near the site with her husband, daughter, and three granddaughters, all under 9 years old. “They don’t need to stink it up more.” She signed Graham’s petition.

There are other skeletons buried in the soil where the state wants the waste-energy plant. It’s also where an entire African-American neighborhood, Fairfield Homes, was located from the 1940s until the early 1990s, right by the fields of chemical plants. Most of it was public housing. Residents suffered from respiratory disorders and cancers linked to their exposure to the neighboring plants’ emissions. The city tore it down to expand the industrial park.

Two of the houses from the former community remain, literally a stone’s throw from the proposed incinerator site, behind what used to be a sports bar. Just hundreds of feet away from the site are huge mounds of coke, the product of coal processing, which are mostly covered, but not entirely. Within a one-mile radius are even larger mounds of the unprocessed black stuff sitting uncovered, even with homes right across the street.

Greg Sawtell of United Workers says homeowners often complain about arriving from work to find their walls coated with thin, grey sheets of coal dust. A playground and recreation center sits at the base of one coal station. The entire industrial park runs right along the Baltimore Harbor.

Walking through the working-class neighborhood you see toddlers and teens of multiple skin hues riding bicycles and tossing footballs under the Baltimore Ravens flags that are hoisted from almost every porch. Poverty claims no racial favorites here.

Graham was born in Baltimore and doesn’t remember as a younger child smelling foul air. His family moved to Corpus Christi for a little while, but then moved back here, which is when Graham says he noticed the tainted atmosphere. Understanding that his family didn’t have to live with this, he began working as a student leader in Free Your Voice to do something about it.

About a year ago, youth organizers from South Africa, many of them high school students, came to Benjamin Franklin High to talk with the Baltimore students about their struggles fighting against government officials and police over housing and human rights. Called the “Shack Dwellers,” the South African students are part of a larger movement of residents of the shantytown slums who’ve been rallying in the streets against government-imposed housing evictions, many of which have been executed with brute force.

The struggles of this South African youth movement is captured in the documentary “Dear Mandela,” and the crew was visiting Baltimore as part of a tour to promote the film and engage with other youth activists. The director of the documentary blogged this week in Esquire about how the youth are following the example of Nelson Mandela in the time of his death.

Inspired in part by the South African activists, the Free Your Voice collective is staging its own rally at the high school, followed by a march to the proposed incinerator site. (It was planned for today, but was rescheduled to next Wednesday due to the weather.) The principal of the school supports the protest, as do many of the teachers, some of whom have integrated lessons about the incinerator into their classes. Most of them got involved after Graham crashed a teachers meeting to inform them about the incinerator.

Graham plans to be an architect after he graduates. He’s already helping build a blueprint for community organizing.

Regrouping at the end of the canvassing mission at a neighborhood community center, Graham pulls out the speech he’s been practicing to deliver at the rally. He begins by quoting Charlie Chapman: “We think too much and feel too little. More than machinery, we need humanity; more than cleverness, we need kindness and gentleness. Without these qualities, life will be violent and all will be lost.”