The United States uses about 3.7 million gigawatt-hours of electricity each year. That’s an unfathomably huge number. But the next time someone tries to make the argument that 100 percent renewable energy is out of reach for the U.S., show them this image: 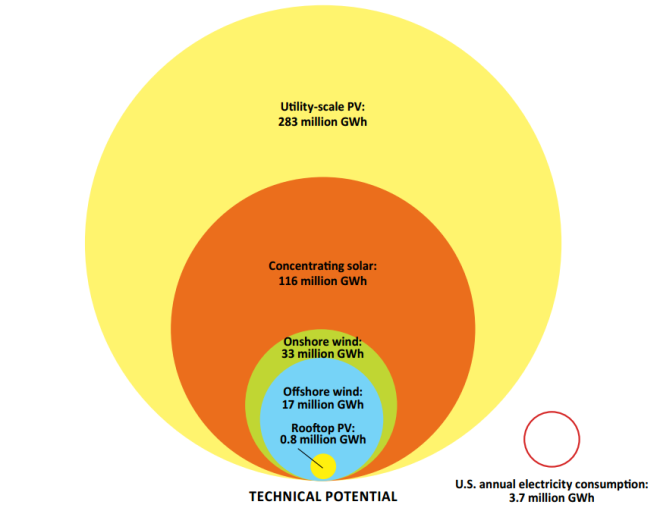 All of U.S. electricity usage is down there at the bottom right. Everything else is the States’ renewable potential.

Earlier this year, the National Renewable Energy Laboratory released a report that said the United States’ upper ceiling on rooftop solar generation potential was around 39 percent of all U.S. electricity sales. That’s the tiny yellow circle in the middle. The potential of utility-scale solar? 350 times that li’l guy.

In a new report from Environment America Research & Policy Center — where this image appears — researchers lay out the achievability of a U.S. transition to 100 percent renewable energy. “There’s no question of whether or not there’s enough renewable energy,” said Rob Sargent, a program director at Environment America, on a press call. It’s more a function of how to achieve such a transition.

The recommendations in the report will sound familiar. If we want to make it to a 100 percent renewable future, we need to start by ramping up solar and wind production, shifting toward electric vehicles, pumping dollars into energy storage research, and taking advantage of energy savings and efficiency programs.

But maybe more than anything, we need to take a good long gander at that bowling ball of renewable generation potential and convince ourselves that carving out a grape’s-worth is within our power.